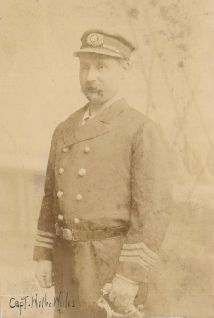 William Scott Wyles was born at Kirkaldy in Scotland in 1853. He arrived in China in 1869 as an apprentice on a sailing vessel and joined Messrs Butterfield and Swire as apprentice pilot on their river steamers. He subsequently piloted their vessels the Chefoo, the Tamsui and the Chinkiang and was known as one of the smartest men on the Tientsin run. He so impressed Sir Robert Hart, Inspector General of Customs, that he was offered the position of Commander in the revenue fleet.  He was also appointed senior captain in bringing out three new revenue steamers (Chuentiao, Kaipan and Likin) from England in 1888.

At the time of his death in 1917, Wyles was Captain of the Chinese Customs revenue steamer ‘Pingching'.  On a visit from Shanghai to the Southern Lights he became seriously ill at Amoy.  He was being transported to Shanghai Hospital on the Dutch steamer, the Tjikini, when the vessel was weatherbound by a typhoon and he relapsed and died. 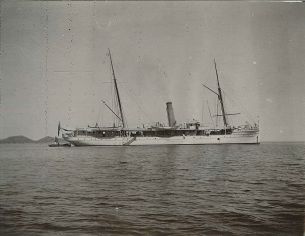 e Customs Service, 'Hai guan zong shui wu si shu', is an international, yet predominantly British-staffed, bureaucracy which has been under the control of successive Chinese central governments since its founding in 1854 until January 1950. Established to collect taxes on maritime trade during the Taiping Rebellion, its functions quickly expanded to domestic customs administration (the Native Customs), postal administration, harbour 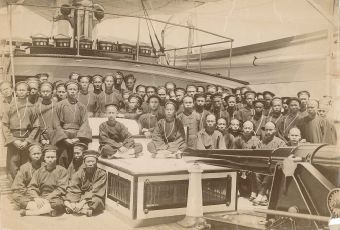 and waterway management, weather reporting and anti- smuggling operations. It mapped, lit and policed the China coast and the Yangzi River and undertook loan negotiations, currency reform and financial and economic management. It was also involved in local, provincial and national politics, as well as international affairs.

This collection of personal papers and photographs relating to Wyles' service with the Chinese Customs Service was donated to the Library in 2013 by Wyles' great-granddaughter, Meredith Wyles.

Letter from the Coast Inspector [signature indecipherable] to Wyles' sister, Mrs T.L. Miller, 18 September 1917, re the death of her brother, with an extract from the Inspector General's despatch

Typed copy of the last will of William Scott Wyles (re the bequest of property in Paoshan, houses, furniture and household effects and money to his housekeeper Yang Tsze and subsequently to her daughter Maggie Jarley, with the residue to his sisters Isabelle Wyles and Annie Sophia Miller), 13 March 1915