Above: Illustration of L'Oiseau de Feu by Ethelbert White

Beginning in Paris in 1909, Diaghilev’s Ballets Russes company set milestones both in the development of choreography and the development of dance technique. Diaghilev’s vision was of ‘total’ works of art in which all the elements – dance, music, visual arts, literature/philosophy and décor – were given equal status; in which collaboration between artists and their disciplines became both the ideal and the model. 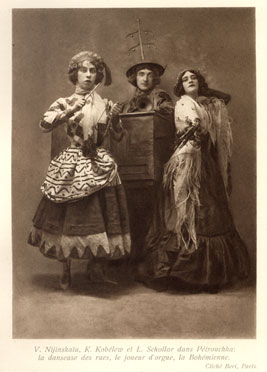 Choreographers and dancers who worked for the Ballets Russes included Massine, Michel Fokine, George Balanchine, Anna Pavlova and Vaslav Nijinsky. Diaghilev commissioned composers of the calibre of Stravinsky, Claude Debussy, Maurice Ravel and Sergey Prokofiev, while artists such as Picasso, Leon Bakst, and Henri Matisse created stage designs for him.

The inheritor of Diaghilev’s legacy was Colonel Wassily de Basil who, under the auspices of the theatrical agents J. C. Williamson Ltd, brought no less than three Ballets Russes companies to Australia between 1936 and 1940. The tours had a profound impact on Australian cultural life, as they introduced to the Australian public not simply dancers, set designers and scores the like of which had never be seen or heard here before, but models of collaboration and practice that then inspired Australian artists such as Sidney Nolan, Donald Friend, Daryl Lindsay, and Thea Proctor.

The Barr Smith Library’s Theatre Collection includes a number of fine illustrated editions of designs by Bakst and others, artistic renditions of dancers such as Nijinsky and Baronova, commentaries and histories of ballets and companies, and biographies of dancers. A number of Ballets Russes programmes and images are available electronically through the Adelaide Research and Scholarship Digital Library. 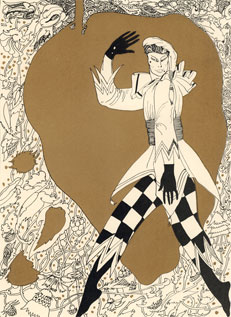 A 4 year Australian Research Council-funded research partnership (2006-2009) between the University of Adelaide, The Australian Ballet and the National Library of Australia, overseen by Associate Professor Mark Carroll of the Elder Conservatorium, has embarked on a public celebration of the Ballets Russes, presenting a series of ballets, exhibitions, and publications that celebrate the spirit of Diaghilev. A large research undertaking, investigating the Diaghilev vision, will support these programmes and its profound impact on, and legacy in, Australia.

Left: Nijinsky, from ...An Artistic Interpretation of His Work by Robert Montenegro