Book of the Month

A voyage to New Guinea and the Moluccas, from Balambangan… Thomas Forrest, 1780 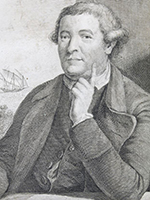 Little is known about the personal life of 18th century navigator, Thomas Forrest, however, he is believed to have served in the Royal Navy, acting as midshipman in 1745, implying a date of birth of approximately 1729.[1]  He was engaged by the East India Company in 1748 and, according to his own writings, sailed the Indian waters almost continuously from 1753, making fifteen voyages from Hindustan to the East and four voyages from England to India.[2]  He gained an enormous amount of knowledge of the weather, winds and sailing routes, and eventually published, in 1782, A treatise on the monsoons in East India which documented many of his interesting experiences.

In 1770 Forrest assisted in the formation of a new settlement at Balambangan (Malaysia), which had been recommended by the Scottish geographer, Alexander Dalrymple.  Four years later, when the council, wishing to develop new sources of trade, wanted to send an exploring party in the direction of New Guinea, Forrest expressed his interest.[3]  His services were gladly accepted, and he set sail onboard the Tartar-Galley from Balambangan on the 9th November 1774 with David Baxter (mate), Laurence Lound (gunner) and a crew of eighteen Malays.[4]  He led the party as far as New Guinea’s Geelvink Bay, exploring the Sulu archipelago, the south coast of Mindanao, Mandiolo, Batchian and Waygiou, which he was the first to chart with any degree of accuracy.[5]

When he returned in 1776, Forrest commenced work on a highly detailed account of the voyage, publishing A Voyage to New Guinea and the Moluccas… in 1779.  Though his journey was reportedly one more of examination and enquiry than discovery, and the contributions he made to geographical knowledge tended to be corrections of detail rather than fresh ideas, he wrote with a tact that was seldom used by Europeans at the time.  What he achieved in a relatively small and leaking boat, together with his gentle approach to local inhabitants and his recorded observations, with their lack of moral judgment, won him a great deal of credit. 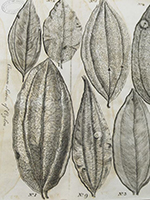 Forrest continued to sail well into the late 1700s.  He intended to survey the Andaman Islands but fell leeward of them, passing instead through Preparis Channel to the Tenasserim coast (Myanmar, Burma), which he examined as far as Quedah.  In 1790 he explored the same coast more thoroughly, discovering that the islands lying off it formed a long row which resulted in a sheltered 125-mile long passage between them and the mainland.[6]   He named this Forrest Strait.  The results of these voyages were published in A journal of the ‘Esther’ Brig, Capt. Thomas Forrest, from Bengal to Quedah, in 1783 (1789) and A voyage from Calcutta to the Mergui Archipelago (1792).

The Library’s copy of A voyage to New Guinea and the Moluccas… is the second edition, published in 1780.  Complete with portraiture frontispiece, engravings of local inhabitants, flora, rituals, and maps, plus vocabularies of the Magindano tongue and a few “Pappua words”, the book is a fine example for its time.  From the outset, Forrest’s gift for writing in a manner simultaneously pragmatic and thoughtful is immediately apparent.  Landscapes are portrayed honestly, without embellishment, whilst difficulties with the crew or with those encountered along the way, are tackled with a sensitivity befitting a man oft-described as respected, deserving and non-judgmental.   On page 27 we read of Forrest’s gift of red handkerchiefs to his crew for their rowing efforts, on page 60, his making of small presents for chiefs, and on page 61, his relief at learning the life of a man who had robbed him has been spared by his enraged and loyal steward, Matthew…

In 2019 A Voyage to New Guinea and the Moluccas underwent extensive conservation work.  Read more about those repairs in its Adopt-a-Book condition report.

Forrest, Captain Thomas, A voyage to New Guinea and the Moluccas, from Balambangan: Including an account of Magindano, Sooloo, and other islands: and illustrated with thirty copperplates. Performed in the Tartar Galley, belonging to the honourable East India Company, during the years 1774, 1775, and 1776… London: Printed by G. Scott, 1780