Until the late 1820s most books were beaten before they were sewn.  The purpose of this was to make the book as solid as possible; softer, hand-made papers were capable of compressing up to half their thickness. 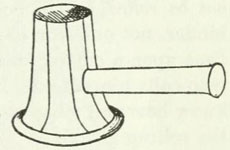 The bell-shaped beating hammer.
Image taken from The art of bookbinding. Joseph Zaehnsdorf. 1890.

A beating-stone was required for this process.  The stone, or sometimes an iron slab, provided a hard surface upon which the paper could be placed.  Sections of approximately half an inch thick were placed on the stone, usually with a sheet of waste paper at the top and bottom, thus preserving them from any glaze caused by the repetitious contact of the hammer.  The binder then brought down the cast-iron, bell-shaped hammer firmly on the paper, ensuring that it descended perfectly flat, so as to avoid slicing the pages with its outer edge.  The sections of paper were constantly moved around and turned over to ensure even consolidation.  By passing the sections between the finger and thumb the binder could quickly determine whether they had been beaten properly.

Before any beating occurred it was crucial for the bookbinder to observe the book’s printing date, usually at the foot of the title page.  If recently printed books were beaten too heavily they were likely to ‘set-off’.  That is, the ink lines from one page would impress onto the opposite page, rendering the text virtually illegible. 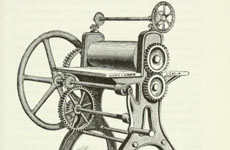 An early rolling machine.
Image taken from The art of bookbinding. Joseph Zaehnsdorf. 1890.

Precautions against setting-off were as applicable to the rolling machine, invented by William Burn in 1827, as they were to beating.  Comprised of two smooth-surfaced iron cylinders, the rolling machine offered an alternative to the time-consuming, laborious process of beating.  Controversially, it also did many ‘beaters’ out of a job.  However, it was capable of compressing the book to about five sixths the size of one beaten by hand.  To operate the rolling machine, the binder took sections of the book, placed them between a pair of tinned iron plates of corresponding size, and then put them to the rollers.  The handle was turned and the plates were caught and drawn between the rollers.  Great care had to be taken not to place too many sections through the machine at one time, the heavy pressure likely to cause the paper to become brittle, even to cut it.  Similarly, the binder had to watch for colour plates (whole-sheet illustrations), where the inks were slow-drying in nature.  Any pressure to these would cause the plate to stick in a manner rendering separation from its opposing page impossible.  These plates were never placed until after the beating or rolling process.  The whole book, once beaten or rolled, is usually then put into a press and left for at least a day, compacting and levelling the sections further.

English bookbinders used to beat their books harder than the German binders, although perhaps not so eagerly. This was largely due to the way in which the hammer was held. The English grasped the hammer’s short handle in such a manner that their knuckles pointed towards the stone and their nails faced upwards. The hand was then swung over from the wrist such that the face of the hammer could be seen before it came down on the paper. The motion might seem unusual but it ensured that the hammer always descended perfectly flat and thus avoided cuts or bruises to the paper. German binders, on the other hand, tended to hold the hammer such that the tips of their fingers met underneath the handle. This, combined with a tendency to stand, rather than sit at the workbench, increased the pressure with which the hammer came down.

Joseph Zaehnsdorf, the renowned 19th century Austria-Hungarian bookbinder, had a very healthy respect for the rolling machine. In his book, The Art of Bookbinding (1890, pp. 11-12) he claims never to have been able to “pass or hear a rolling machine revolving very rapidly without having vividly brought to my mind a very serious accident that happened to my father. He was feeling for a flaw on one of the rollers, and whilst his hands were at the edge of the rollers the man turned the handle, drawing the whole hand between the heavy cylinders. The accident cost him many months in hospital, and he never regained complete use of his right hand.” 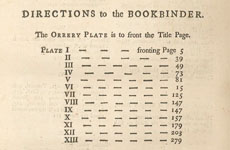 Astronomy explained upon Sir Isaac Newton's principles... James Ferguson. 1757.
Instructions for the bookbinder as to the correct placement of plates.

Before any sections could be sewn together the book first had to be collated.  Collating referred to the process binders followed to ensure that all parts of the book were complete and in the correct sequence according to their signatures.  This accuracy check was achieved by firmly gripping the right-hand top corner of the folded sections with the right hand.  The wrist was then turned, so that the back section was brought forward.  The binder then used his or her left hand to fan out the sections such that the signatures were revealed and the sequence could be confirmed.

The placement of plates must also be checked for accuracy, usually against the “list of plates” which appeared after the contents page or at the back of the book.  Any single leaves or plates were cut truly using a sharp knife and straight edge and pasted into their correct location.  Some plates were printed on heavy paper; these often required guarding, that is, pasting by their inner edge onto a thin but strong strip of paper which was later sewn through as part of a gathering.  Having placed the plates, the binder inspected them again once dry to ensure they had adhered properly and folded them over, up to the pasting, with a bone folder, in order that they would lie flat when the book was opened.  The whole book was then pressed again in preparation for sewing. 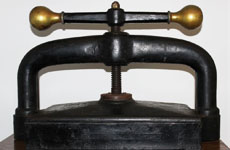 Often mistakenly referred to as a book press, this copy press or copying press, could be found in most government offices during the 19th century.  The first model, patented in 1780 by English engineer James Watt, looked quite different to this but it operated on the same general principle.

Watt had been working with Scottish engineer, Matthew Boulton, on the manufacture of steam engines and had become increasingly burdened with the task of copying, by hand, all of his design specifications and letters.  Determined to speed up the reproduction of his business documents, Watt discovered a way to apply slightly dampened paper with pressure to a freshly written piece such that the latter’s ink would transfer to the copy paper.

The press operator simply placed the document to be copied on a board, covered it with a thin piece of moistened paper, followed by some cloth, much like felt.  The whole was pressed together between two blocks of wood or metal; the result, a reversed copy from the back.  The use of translucent, unsized paper meant that the copies produced were so thin that the text was visible through the paper and could be read in the normal way.  The original document would then be dried with sponge paper.

The press pictured here opens to a height of only a few inches.  Though this allows for the copying of multiple documents at once, it is not suitable for pressing many books at the same time.  A true book press opens much higher, the ‘daylight’ appearing between the plates allowing for the pressing of many books at once.  Despite this, or perhaps even because of its small size, the copying press has, today, found its way into many small binderies where pressing one or two books at a time is quite common.