Until the 19th century every letter, ornament or unit of decoration had to be applied to a book’s cover or spine using a separate heated tool.  This took considerable time and skill, and although inventions such as the type holder, which allowed for concurrent impression of words, sped up the titling process, it wasn’t enough to meet the ever-increasing demand for books. 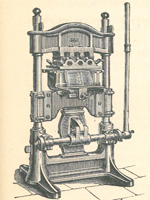 "The Rock" gold blocking and inking press, no. 4 by Kampe & Co. as advertised in The art of bookbinding: A practical treatise. Joseph Zaehnsdorf. 1890

Fortunately, the case binding, or publishers' cloth binding as it was also known, brought with it a radical opportunity for cover decoration: blocking.  Unlike its leather predecessor, the cover of a case binding was constructed separately from the book, making experiments with its blocked decoration far less risky.  If a mistake was made, it was only the cover that was ruined.  This could simply be discarded and a new one created.

The term ‘blocking’ referred to the process of impressing, at once, a whole design into a cover.  The practice of blocking wasn’t new to the 19th century; the dampened leather covers of medieval books having already been impressed with designs from cold wooden blocks.  By the 1700s, the cold wooden block had been replaced with a heated metal die and the all-wood arming press, the pair being used to stamp coats of arms onto book covers.  The die needed to be pre-heated, though, away from the press, and usually only one impression could be made before it cooled and required re-heating.  In c1880, Earl Stanhope addressed this issue; his iron press allowing binders to heat the die in the press and thus continue a run of stamping without interruption.  Probably the most significant breakthrough in the method of cover decoration, however, came in the form of the 1830s Imperial arming press.  Lighter in construction and yet more powerful, it was capable of accommodating larger metal stamps and impressing gold or coloured ink into the designs.

Methods for blocking varied, depending on the design of the press, but all required three important factors: heat, pressure and the time required for an accurate impression.  Equipped with these, the binder marked out the parameters of the cover design on a piece of binder’s board the same size as the book cover.  This allowed for the accurate centring of the design on the book.  The block was then pasted onto the binder’s board, face down, and the back of the block also glued up.  The whole was put into the press, its lever arm brought down such that the glued block made contact with its heated element.  The arm was then lifted to reveal the block which had been affixed to the press.  The cover could now be stamped.  Measurements of the cover’s length marked on the press, the constructed case was inserted into it, the cloth facing the blocks.  The press arm was pulled down quickly to blind stamp the cover first.  If gold blocking was required, the arm was lifted, a sheet of gold foil slipped between the block and the cover and the lever pulled down again.  The cover was then removed from the press and the gold sheet carefully lifted to reveal the gilt decoration. 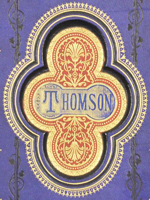 The 19th century was marked by enormous output and achievement in cover design.  Gone were the days of buying a book in plain paper wrappers and taking it to the binder for covering in leather.  In order to market and sell their books, publishers became heavily invested in designs that had a high degree of artistic involvement.  Examples of titles and designs blocked in black ink appeared as early as the 1840s.  The 1850s saw the use of black in conjunction with gold to bring depth to a design.  Artists of the 1860s embraced colours such as red, and by the 1870s it was common to see entire covers blocked in vibrant reds, greens, blues and even shades of orange, brown and grey.  The shift in design from purely decorative to pictorially relevant was also evident around this time, with cover illustrations blocked in gilt in a manner reflective of the book’s content.  At times, the cover image was an exact replica of one that appeared inside the book.

The Art Nouveau style, most popular between 1890 and 1910, began to appear on book covers and spines in the form of stylised leaves, vines and flowers.  Other objects, recognisable although non-realistic, also appeared in the designs but the botanical influence was recurrent.  Artists, who had previously illustrated the book’s contents, were now being engaged by publishers for the purpose of cover design.  Many were influenced by architects, furniture and textile designers, stained glass designers, ceramists and other decorative artists of the era, with covers taking on the immediately distinguishable curves of the natural world.

The pride that binders took in their work during this period was clear.  A number of them blocked their name in gold, in miniscule type, into the border of these designs.  From time to time, the plate engraver’s name could be seen here too.

Glair-treated cloth could be blocked directly with gold leaf. This could be done before or, more frequently, after its attachment to the book board. Over the years, improvements in the blocking or arming press, including an increased platen size, allowed for gold-blocking of both front and rear covers, plus entire spines. The first cloth book to be gold-blocked was Lord Byron’s Life and Works, published in 17 volumes, beginning in 1832.

On display in this cabinet were some of the finest examples of blocked covers: 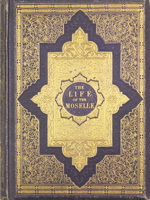 Violet coloured possible morocco pattern grain cloth with bevelled boards. Ornately stamped with identical patterns to front and rear boards, minus the gilding to the back.  Rear pastedown includes a diamond-shaped paper binder's ticket: "Bound by Leighton Son and Hodge."  John Leighton the elder was the renowned English bookbinder and printer, his son an artist and book cover designer.  Their densely ornamented designs have graced the covers of hundreds of books between the 1850s and 1860s. 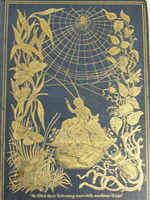 Comprised of blue cloth, pictorially blocked in gold, the cover design is the work of Thomas Staples. Central to the illustration is an insect, probably a cricket, who is seated on a mound and teaching those around him.  In his left hand he holds a book, more of which appear at his feet.  He is dressed in knee breeches and stockings and wears a waistcoat, neck cloth and a long-tailed coat.  Around him are various other insects, including moths, butterflies, beetles, flies, bees, caterpillars, grass-hoppers and ladybirds, as well as a large spider and its web.  Each has gathered on the surrounding foliage to listen to the "teacher".  Blocked in gold at the base of the cover is the phrase "He filled their listening ears with wondrous things".  Includes paper binder's ticket "Bound by Westleys & Co., Friar Street, London." 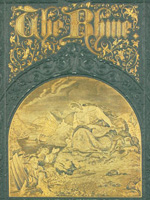 Dark green cloth with a possible sand pattern grain.  Borders of leaves and grapes stamped in relief.  Central pictorial illustration in brilliant gold, suggesting the use of 24k gold leaf.  Bevelled boards, gilding and blind relief stamping to spine and all edges gilt.  Includes binder's ticket to rear pastedown: "J. R. Herzog, Buchbinderei, Leipzig".  In the bottom of the blind stamped cover border there are names to the left and right: "W. Georgy" and "R Gerhold. G. A.".  This is likely a reference to the bookbinders responsible for this work.  Identical blind stamping to rear board, minus the gilding. 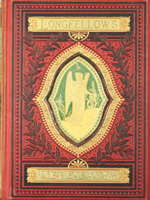 Red publisher's cloth, with black-tooled decorative cover border.  Title blocked in gold banners, showcasing an angel in an enamel-like, recessed gilt, yellow and green centre medallion.  Spine stamped with the round "Landsdowne Series of Poets" black and gold motif.  Spine with a title block in which the author's name appears in green relief.  All edges gilt. 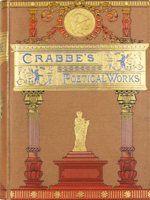 Publisher's tan cloth, with gilt and coloured border to head and tail of cover and spine.  Gilt medallion, central statue and title block (encapsulating blue relief title) further surrounded by columns in graduated colour.  Embellished title block to spine and all edges gilt.  A fine example of the use of colour in stamping, common to books of the late 19th century.

Also on display were these impressive blocked covers: