When opening an old, well-read book, readers will inevitably find its first and last sheets have suffered more than those in between.  It is the purpose of endpapers, or end sheets are they are also known, to protect the valuable text at the beginning and end of a book, essentially taking up any strain of opening the covers which would otherwise be on its first and last sections.

Endpapers form a hinge between the boards and the book, and they hide the raw edges of the covering material where it is turned in around the boards.  They have a decorative purpose too.  When combined harmoniously with a book’s covering material and its headbands, they contribute to the overall aesthetic design.  Over the centuries, changes to the type and style of endpapers have been matched only by the number of different methods for attaching them.

A simple set of folded, white endpapers can be made with four sheets of paper, their grain running head to tail.  Cut to a size slightly larger than the text leaves, the sheets are folded down the middle and made up into two sections by inserting one folded sheet into the other.  Next, two ordinary pieces of waste paper (spoiled or surplus sheets) are cut to the same size, folded and ‘tipped on’ (lightly attached with paste) to the inner edge of each section.  These form protection sheets which are later removed.  The endpapers were then lightly pressed and stitched, one at the beginning of the book, the other at the end, during the sewing process.  Eventually the protective waste paper was torn away, with the exception of a one inch strip at the back which was left on for added strength at the joint.  The strip of the first and the whole of the second leaf were then pasted together over the board, leaving two protective leaves at either end of the book.

The method of creating ‘made endpapers’ consisted of pasting white paper to coloured, usually marbled, paper.  Early marbled paper could be quite thin and its non-marbled side also had a tendency to show spoil marks from the dyes used, making it unsuitable for attachment as a single endpaper.  In order to make endpapers for the front of the book, the binder took two sheets of white paper, a sheet of marbled paper cut to the same size and a waste sheet for protection.  The white sheets were made into a section by inserting one inside the other and the folded marbled sheet (coloured side on the inside) was lightly tipped on its underside to the top of the white sheet.  The folded waste sheet was then tipped onto the plain side of the marbled paper and the top portion turned over to the back, such that all the sheets were encased within the waste paper.  The whole section, including the waste sheet was then stitched through the centre (which would be one of the blank endpaper sheets) during the sewing process.  This method would then be repeated for the rear endpapers, and then the waste sheet would be removed, leaving the uncoloured side of the marbled paper exposed and ready for pasting directly onto the boards.  Traditionally, the other uncoloured side of the marbled sheet would be glued to the endpaper facing it (to make one thick leaf) after all of the papers had been sewn on.  The modern practice is to make the endpapers away from the book, by gluing the endsheet to the underside of the marbled paper, then pressing it lightly and allowing it to dry, and sewing them on afterwards.

The zig zag endpaper, or concertina fold, as it is also known, came into use at the end of the 19th century.  It was popularised by Douglas Cockerell who wanted to minimise the strain upon the endpaper at the joint, exacerbated by the expansion and contraction of the glued paper fibres.  For economic reasons, this method of endpaper attachment has not been widely embraced by trade binders, however, it has much to commend it.  In this method three sheets of paper were used, for example two white and one decorative.  Each was slightly larger than a text page; one of the white sheets being at least a quarter of an inch wider that the book once folded.  They were all folded down the middle with the grain of the paper.  The decorative sheet was folded so that its pattern was on the inside and then it was tipped into the larger of the two white folded sheets.  When dry, the endpaper was turned over and what was the lower sheet was folded back level with the edge of the pasted portion.  It was then folded back on itself such that it was level with the fold of the endpaper which produced the zig zag.  Into this, the remaining folded white sheet was inserted, and it was through this fold that the sewing took place.  The single white sheet, opposite the side of the colour fold was the waste sheet which would later be removed.  The whole was then sewn in with the book.

The most basic of endpapers, created using the ‘tipped’ method, consisted of two single folded leaves, which were merely tipped or lightly glued to the first and last sections of the book, via means of a thin (2-3mm) strip of adhesive.  Once the book’s boards were attached, one side of the leaf was pasted down to the board, becoming the ‘pastedown’, whilst the other side protected the book’s text as either the front or rear endpaper.  Probably the most expedient of all the endpaper attachment methods, and one commonly used on publishers’ clothing bindings, the tipped endpaper did little to ensure the longevity of the book.  Fastened to the textblock by only the thinnest line of glue, the endpaper would frequently split along the inner hinge as a result of strain from opening and closing the book.  What remained was a flimsy spine lining of crash or mull (an open weave, cotton cheesecloth) holding the cover to the book.

There are many other methods for attaching endpapers.  These include hooked endpapers, in which a single folded endpaper is hooked around the whole section and sewn with it; guarded endpapers, which uses a guard of strong paper or fine linen to attach the single-fold endpaper; the elegant leather-jointed endpapers, and the strong, sewn-in cloth-jointed endpapers, plus many more.  Whatever the method, the binder must always aim to strike the right balance between functionally and appearance.

The earliest of endpapers consisted of nothing more complicated than two or four leaves of vellum, folded and then sewn in with the book.  When paper surpassed vellum as the preferred material for book leaves in the 1400s, a new type of endpaper emerged.  It consisted of a fold of white paper, the edge of which was reinforced with a strip of vellum, usually taken from a manuscript.  By the 1500s full-size parchment or vellum pastedowns were being used in some of the more decorative bindings. 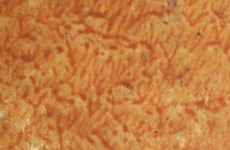 Die Erziehung des Menschengeschlechts. Gotthold Ephraim Lessing. 1785.
Though frequently used as endpapers, this German paste paper has been used to cover the boards of this book.

Frequently used in Germany, paste papers were easily made by binders themselves.  A pigment of choice was simply mixed with paste and a little soap until it resembled a thick cream.  The binder then took two sheets of paper and brushed the paste on to one side of each.  The sheets were next laid together, with their coloured surfaces meeting, and pulled apart to reveal an interesting, wavy pattern.  The paper was then hung over string to dry and finally glazed with a hot iron.  Paste papers were one of the earliest types of endpapers, with many examples found in books from the 1700s.  Not only were they used to cover the inside of the boards but quite often the outside (sidings) too.  Occasionally even the page edges were decorated in this fashion.  The colours were varied; brown was common but the greens, reds and blues had a particularly nice effect.  Additional patterns were often made in the paste.  Sometimes a comb was dragged through it; at other times the binder’s own finger or thumb was used. 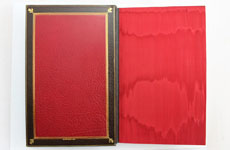 Rarely used until the mid-1700s, the doublure was more common to French than English books.  The term was used by binders to indicate that the pastedown, or inside lining of the cover, was not one of paper but of leather, and it was usually highly decorated.  Technically, it should only be used to refer to leather linings but it was often used when ‘watered’ silk formed the lining too.  Watered silk had a wavy appearance, much like water.  This was achieved either by the finishing technique called ‘calendaring’ or by certain weaves in which the tension of the warp and weft was varied.  Silk linings were mostly combined with top-grade morocco, usually goat skin, their use peaking around the second half of the 19th century.  They posed additional challenges for the binder who had to slightly dampen the silk first, iron out any creases and then turn in its edges around a piece of paper to prevent fraying.  This piece was then inserted into the book as one of the very last operations in the binding process.

This paper, dyed in the pulp, was named after British papermaker, Thomas Cobb.  Introduced in approximately 1800, it was a thin, finely textured, wove paper which lent itself to considerable stretching when made wet.  It was stained various colours in the making but it frequently appeared in rather drab reddish-brown and olive hues.  In the early part of the 19th century it was used to cover the boards of books, particularly half-calf bindings.  In the second half of the century, it was more frequently applied as endpapers to less expensive leather bindings. 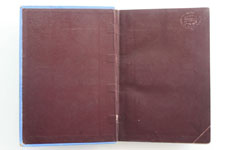 Surface paper, also known as coated paper, was coloured on one side only.  Its pigment was spread on evenly with a brush, leaving the paper with a very smooth, almost artificial appearance.  It could be glazed or left dull.  It frequently came in colours such as yellow and buff but darker examples of mauve, chocolate brown and even black can readily be found in books of a religious nature.  Surface papers were primarily used as endpapers for publishers’ cloth bindings of the 19th century but occasionally they found their way into fine bindings too.  This paper was so easily marked and stained that it was never used to cover the boards of half-bindings, however, it was used for the heavily printed covers of cheap fiction sold in the mid-1800s at railway station stalls. 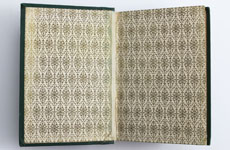 Printed endpapers first came into use from about 1880.  The patterns were many and varied but common to the earliest was a small, repeating motif, usually restrained in colour.  Later designs included diaper floral, bird and foliage patterns.  Some of the more elaborate endpapers had patterns printed in gold and bronze.  The binder had to be particularly careful when selecting the latter, with cheaper varieties turning black after a short period of time.  Printed papers were regularly found in publishers’ cloth bindings but seldom made their way into leather work.

The marbled paper has a long and fascinating history.  For more information about its origin and production techniques, refer to "The Marbled Endpaper".

Also on display in this cabinet were the following endpaper styles: