For centuries leather had been an important covering material for books.  In The history of English craft bookbinding technique (3rd ed., 1988), Bernard Middleton suggested that leather had in fact been in use in England since the Saxon times. 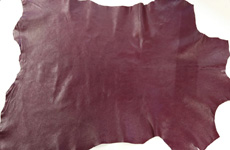 This purple-dyed goatskin is a relatively small hide.

The type of leather to grace the covers of these books was not well documented.  However, later volumes of the 12th and 13th centuries did appear to be bound in goatskin.  Most likely, the binders simply used what was available to them at the time.  If an animal had to be killed for domestic purposes, the skin could be salvaged for a book.  Given the abundance of deer in England’s hunting country during the medieval period, it was likely that deer- or doeskin was used to some extent.

By the early 15th century sheepskin had become a popular choice for covering.  It was not long, though, before calf took its place; its smooth, dark brown colour, once tanned, lending itself particularly well to blind-tooled decoration.  The majority of the goatskin used in England appeared on bindings of the 18th and 19th centuries; bright red, green, purple and blue hues in use as early as the mid to late 1700s.   Early in the 18th century an entirely new style of leather binding emerged, in which only the back of the book and a small portion of its sides and corners were covered with leather, the remainder of the boards covered with paper.

Choosing the most appropriate binding style and leather for a book was quite a responsibility for the binder.  Consideration had to be given to the purpose of the book.  If it was to receive constant use, a goatskin would make a suitable covering; if it was likely to sit on the shelf unopened for extended periods of time, a vellum or cheap sheepskin would likely do.  The binder also needed to understand how the leather had been treated before they selected it as a covering material.  Leather usually underwent one of two processes: tawing or tanning.  A tawed skin was treated with potassium aluminium sulphate and salt.  It produced a flexible white leather which was extensively used for bookbinding until the middle of the 15th century when binders switched to tanned skin.  In tanning, the central layer of the animal skin, known as the dermis, was treated first with a liming solution to remove it of hair and flesh.  This was followed by immersion in one or more tanning agents or tannins, usually made of ground oak bark and water.  The skin was then left to dry before being shaved or split with a sharp knife and oiled, dyed or polished to form what we now know as leather.  It was often necessary, depending on the type of leather and its treatment, for a binder to adjust the way they prepared it for covering.  Some leathers were certainly more challenging to pare than others…

Bellow are some of the different types of leather commonly used to cover books:

Although it is the skin of the animal, vellum, technically speaking, is not leather because it has not undergone the process of tanning or tawing.  Instead, the skin is soaked in lime to facilitate the removal of both hair and flesh by scraping.  It is then stretched on a frame and a solution of whiting, soda and water applied to extract the grease.  When dry, a knife is used to shave the skin to a uniform thickness, before it is rubbed down with pumice.  Although vellum is durable, it’s highly vulnerable to changes in environmental conditions.  Subject a vellum-covered book to moisture or heat and it will soon voice its displeasure in the form of severe disfigurement, warping any boards in the process.  Although vellum was one of the earliest book covering materials, enjoying a peak in the 16th and 17th centuries, its tendency for shrinkage, combined with a labour-intensive production process, has virtually ruled out its use today.  Occasionally, limited editions or books issued by a private press are still bound in vellum.

Goatskin is spongy to the touch.  It has a definite grain and its surface is irregular with ridges, furrows and visible hair follicles.  Alum-tawed goatskin was likely in use before the 11th century but it was tanned goat-skin that became popular in Europe from the 16th century.  Originally imported from Turkey and Venice, goatskin was given the name ‘Turkey’ until the early 18th century when it was increasingly described as ‘Morocco’.  Somewhat confusingly, ‘Morocco’ is often used to describe all goatskins, when in fact there are a number of subspecies such as ‘Levant’, ‘Niger’ and ‘Oasis’, which have different grains or patterns in the skin once tanned and dyed.  Goatskin is a very durable leather.  It takes dye well and it’s not unusual to find examples of it in the most vivid of blues, reds and greens.  It also responds well to gold-tooling, with many binders tending to choose goatskin for their most decorative works.  Its only downside – goatskins are typically small so they rarely find their way on to books larger in size than the octavo.

The most common leather used in bookbinding, calf is smooth with no perceptible grain.  Its natural colour is a pale biscuit but it can be dyed any shade.  In use since the 12th century, its smooth and sturdy nature provides an excellent base for both blind and gold tooling.  The hides, usually from very young animals (7-10 days) can be treated in a variety of ways; some are polished, sprinkled, mottled and stained, whilst others are marbled, diced or grained.  In the 15th and 16th century it was not uncommon to use older skins which were tanned and had greater strength and arguably more character.

Popular in Germany from around 1550 to 1650, pigskin was usually found on books with wooden boards.  It has a highly recognisable follicle pattern; hairs are arranged in groups of three and are interconnected by a criss-cross grain pattern.  Pigskin of this era was almost always alum-tawed, the process of soaking in alum and salt giving the skin its characteristic white appearance.  It is a very durable leather, and although it responds well to blind-tooling, the heated tools fail to darken the leather making it difficult to see the pattern.

Occasionally calf skins are inverted so that the inner or flesh side of the skin is showing, giving the appearance of suede.  Reversed calf could be found on stationery bindings, account and reference books and some music scores from the 18th century onwards.  It was almost always brown in colour and usually in very poor condition.  Its lack of durability and susceptibility to absorption of air pollutants means that it is seldom used today as a book covering.

Sheepskin is a beautifully soft leather with a finely textured surface.  It can look a little like calf but is distinguished by the characteristic arrangement of follicles which reflect the curly wool of the sheep.  Tan coloured sheepskin found its way onto a number of 17th and 18th century books, and by the 19th century the leather was being embossed in a variety of ways to simulate other leathers or provide more appealing surfaces.  Sheepskin is not a robust leather; it has a tendency to peel away in strips.  However, it was, and still is, cheap compared to goatskin, so it was used often for the lower end of the market where books were sold ready-bound.  The grain split of sheepskin is very thin, so it too is frequently used for spine labels on books.

Emu leather is both strong and durable.  What makes it unique is its distinct follicle spread evenly throughout the entire surface area.  The example provided here is most likely bound from the leather of the bird’s legs which tends to be thicker with a raised pattern.  Although commonly used for accessories such as wallets, handbags and boots, emu is rarely employed as a book covering material.  Its use tends to be reserved for fine bindings and limited editions.