Marbling, or marbleising as it is also known, was a method of decorating paper with floating colours.  Some of these were arranged in such a way as to resemble marble: hence the name.  The desired colours were added to a bath of gum or marbleising size and the pattern that formed on top of the size was removed by laying a sheet of paper upon it. 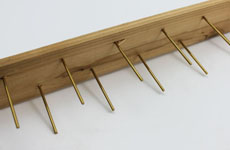 The marbling comb is used for raking patterns into paints when creating marbled papers. Solid brass pins provide corrosion resistance and long handles allow for easy resting in the marbling tray. This comb, with its 2 inch spaces between the pins, is used to create the 'peacock' or 'bouquet' pattern.

Once lifted from the bath and cleaned, the paper was laid flat or hung up to dry.  Often a stick or a comb was drawn through the bath to force a different pattern into the size, before the paper was laid upon it.  Although ‘recognised’ patterns existed, no two pieces of marbled paper would ever be identical since the pattern floating on the size could not be controlled completely.

The marbling process has been well documented.  About its origins, though, we know comparatively little.  Gabriele Grünebaum, in her book How to marbleize paper (1984), suggested the tradition of marbling went back to the Suminagashi paper produced in Japan during the 8th century.  Bernard Middleton (A history of English craft bookbinding technique, 1988) believed it was much later, suggesting that the earliest Japanese examples dated from 1118.  There has been general consensus, however, that the use of marbled paper, in books specifically, probably originated in Persia, where examples of the decoration could be found on manuscripts of the 16th century.  European travellers appeared to have taken particular note of the marbled papers manufactured in Turkey, a number of them publishing accounts on what they described as papers decorated in the ‘Turkish’ manner.  In fact, during the 17th century, Europeans referred to these papers as ‘Turkish’, not ‘marbled’, as they are known today.  The English embraced marbled paper and by the 1670s it was fairly common in use.  It was not long before the first pattern ‘Old Dutch’ was replaced with the pleasing French Shell and the Stormont Antique Spot.  Nonpareil and Spanish patterns followed in the mid-1800s, which, in turn, were superseded in popularity by Gloster, Italian and Gold Vein patterns.  The 20th century saw a decline in the use of endpapers but in recent decades they have become fashionable again, with bookbinders and craftspeople alike taking an increasing interest in the paper and its relevance in a variety of modern applications.

There are several methods for marbleising paper; two of the most common are discussed below. 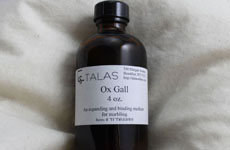 Ox gall is used as the expanding and binding medium for the colours used in the marbling of paper and other materials.

In classic marbleising water-based colours were mixed with ox gall, the bile from the gall bladder of a bovine animal, to produce extremely vibrant results and numerous design options.  The first step in the process was to prepare the size.  The traditional method involved mixing, and boiling for about 10 minutes, a combination of water, size preservative and carrageen moss, a species of red algae that grew along the Atlantic coast of Europe and North America.  Cold water was then added to the brew and, once cooled, it was strained through a sieve to remove any solid residue.  A more expensive, yet significantly faster, way to make the size was to substitute the Carrageen Moss with ‘Carrageenan’.  This powdered extract from the Moss dissolved in warm water and eliminated the need for boiling and straining.  Size made in the traditional way needed to lay covered in a cool place for 24 hours until it became gelatinous.  The size was then poured into a tray so that it filled to a depth of at least one inch.

The next step was to prepare the colours.  Those used in classic marbleising were made from finely ground pigments mixed with distilled water.  Many bookbinding and art-supply stores now sell ready-made liquid dyes which have been ground so fine as to guarantee they will not sink into the size.  To assist the colours to float, and to prevent them from mixing with each other, they were combined with a few drops of ox gall. When satisfied with the consistency of the mixture, the craftsperson skimmed off any film that had appeared on the surface of the size with a strip of paper or cardboard.  Then, using a wooden stick, drop brush or pipette, a drop of colour was placed onto the surface of the size.  If mixed with the correct quantity of ox gall, a circle of about 3 inches would form. 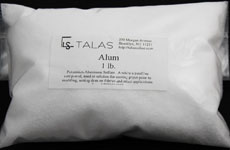 Alum is a white crystalline compound, added to the marbling solution. Also referred to as Potassium, it can be used to coat paper prior to marbling and is useful for setting dyes on the paper.

Once the colours were laid on the size, the paper was prepared.  A firm piece of paper, trimmed to fit within the tray, was coated with an alum solution on the side to receive the colours.  This solution enabled the colours to stick to the sheet, and it could be easily purchased from bookbinding stores in a powder format which was dissolved in boiling water. It was either sponged evenly onto the paper or the paper itself was dipped into a tray of the solution.  The paper was then laid out to dry with a sheet of cardboard on top of it to prevent wrinkling.  Before it had completely dried, the paper was lifted with the left and right hands at opposing corners and placed slowly, so as to avoid air bubbles, into the tray such that the centre of the paper touched the surface first.  It was then carefully lifted by its short edge, rinsed with running water to cleanse it of any remaining size and laid flat or hung up over string to dry.  A wax or a varnish could then be applied to give the paper a hard finish.

If a pattern was required on the paper, a stick or a comb could be drawn lightly across the colours before the paper was laid down upon them.  This was done carefully, in a manner that did not disturb the size.  At no time were the points of the stick or comb dipped below the size surface.  There were many comb styles, each of which created a different pattern.  Some patterns required the use of multiple marbling combs; others were created by blowing onto the colours through a straw.

The process for producing oil-colour marbleised paper was very similar to that used in classic marbling; it was only the ingredients that differed.  Oil-colour marbleising had the benefit of less preparation time but the control the craftsperson had over the pattern was also much reduced.  A marbleising tray was still required but it did not need to be filled with a size solution; pure tap water was sufficient for basic patterns.  Where a more delicate pattern was the aim, a little paste, stirred into the water to produce a creamy solution, would improve control over the colours.

Once the water, or paste-water mixture, was ready, the colours were diluted with a dispersing agent such as Turpentine.  As with the classic marbleising method, their composition needed to be tested by applying drops to the water.  If the colours sank, more Turpentine was required; if they spread too far, more oil-colour was needed.  When satisfied with the consistency, the craftsperson applied the colours drop by drop to the water with a stick or pipette or they were sprinkled upon it with a brush.  When the colours hit the water’s surface they broke up into many small droplets and moved quickly.  This could make it difficult to create a pattern, although, with the aid of a wooden stick, the drops could be gently persuaded to move a little on the size.

When the desired pattern had been achieved, the transfer of it onto the paper needed to be quick.  Any delay would simply allow the colours to separate and form a new pattern.  The fact that the paper used in oil-colour marbleising did not need to be alum treated, nor washed clean to remove any size afterwards, went some way towards making up for this lack of pattern control.  Once removed from the water, the paper was simply laid out to dry.  The craftsperson just needed to bear in mind that the oil colours took much longer to dry than water-based colours, so care had to be taken not to touch the marbled paper too soon, to avoid smearing the pattern.

Obtaining the correct composition of colour and ox gall can be tricky. When too little ox gall is added to the colour, the mixture will fail to spread when placed onto the surface of the size, dropping instead to the bottom of the tray. When too much ox gall is added to the colour, the mixture will expand excessively, making it virtually impossible to create a desired pattern. The consistency of the mixture can be changed by adding more ox gall or more colour, and retesting it on the size, however, observation of a few simple factors will increase the craftperson’s likelihood of getting the composition right the first time. Ox gall and colours should always be prepared at room temperature; the tray and the size into which they are placed should also be at room temperature. Colours that are too thick to work with can be diluted with distilled water, and ox gall can be added to the colours one drop at a time, the solution tested on the size after each drop.

As with the colour mixture, the consistency of the alum solution which is coated on the paper to improve colour adherence, must be just right.  If it is too strong, the colours are likely to flake off of the sheet once it has been marbleised.  In the unfortunate event that the craftsperson has prepared a batch of sheets with this strong solution, the remaining papers can still be saved.  Grünebaum suggests spreading a thin layer of wallpaper paste over the alumed side of the papers before continuing to marbleising them.[1]

In his 1881 book, The whole art of marbling, C.W. Woolnough claimed that the first marbled paper to be used in English bookbinding, around 1655, was that of the Old Dutch pattern. In an attempt to evade the duty imposed upon it, the paper was imported from Holland wrapped around toys. It was then carefully smoothed out and sold for quite a hefty price to binders who used it as endpapers. If the paper was not large enough, they were compelled to join two pieces together. Examples of these joins can occasionally be seen on books of the 17th century. 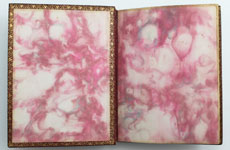 This is known as the Morris pattern. Its origin dates from the end of the 19th century.  In The art of marbled patterns and how to make them (1989), Einen Muira suggests it may have been created by E. W. Morris who was a printer in London or possibly by a gentleman named Morris who worked in Oxford.  The pattern is created in a manner unlike the traditional western style of marbling.  The paper is soaked with water using a sponge and the colours dropped onto it.  Since the paper is already wet, the colours run into each other, producing a water colour effect.  The paper could be moved in such a way as to guide the flow of the colours on the page.

Also on display in this cabinet were the following marbled paper designs:

Note: many of the older items on display here have been rebacked or restored in some way during their lifetime.  As a result, the endpapers that appear here may not have been part of the original binding but would have been added at a later date.