Surprisingly little has been documented about the purpose or indeed the need to line the back of the book before it was covered.  It was not a practice adopted in the early days of the English codex; in fact no attempt was even made to stick the backs of the sections together at all in very early bindings, let alone to a cover.

For the most part, lining would appear to be a 17th century addition to the binding process and this could offer a clue as to its purpose.  Lining not only held the sections together firmly and provided an anchor for the glued covering material, it ensured a very smooth back which made titling and tooling the spine easier, improving the appearance of both.  Since the 1800s, developments in binding styles have changed the way the majority of books have been lined.  Described below are a couple of the most common methods for lining.

Lining the Tight Back Book 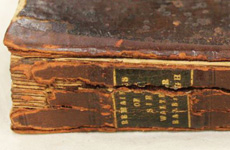 The term ‘tight back’ described a book in which the covering material had been glued to the back of its sections, either directly or to a layer of paper placed between the back and the cover.  Until the end of the 18th century almost all English bindings were tight backs.  There had been some dissent amongst binders as to the extent of lining these bindings required, the French often applying many layers of split leather or paper, the English much less for fear of stiffening the back and making the book difficult to open.  Occasionally it was only the headbands that were lined, not the whole length of the back.  What most binders did agree on, though, was that if the book was to be lined entirely it needed to be between the cords only, not over them.  So, they took two small pieces of paper and cut them to the width of the spine and just long enough to cap the headbands.  These were dampened, glued and placed so as to extend just beyond the headbands, then they were rubbed down well.  The book was next placed on its back and the headbands pressed from the front firmly into the paper.  Any overhang of the paper lining was finally cut off at the top of the book.

Lining paper or a combination of this and ‘super’ or ‘mull’ (loosely woven cheesecloth) was employed for the length of the spine.  This was cut to the exact width of the back and glued between the cords, up to the headbands - the super first if it was to be used and then the slightly moistened paper.  Care had to be taken not to glue over the cords so as to avoid damaging their appearance once covered.  The book was left to dry, then the excess lining at the headbands was cut off and the back sandpapered to remove any irregularities.

It is not uncommon to see 17th and 18th century bindings in which strips of parchment manuscript have been used to line the spine and overlap the joints before being pasted down under the endpapers.  In 19th century bindings almost any sort of scrap paper or printed text could be found lining the spine.

Lining the Hollow Back Book 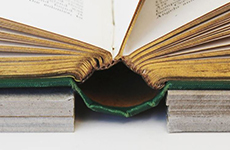 Fifty celebrated men: Their lives and trials, and the deeds that made them famous. London, Ward, Lock, and Co. Undated but c1884.
When opened, the sections of the hollow back book raise upwards and away from the spine.

The term ‘hollow back’ described a book in which the covering material was not glued directly to the back of the sections but to a hollow or false back.  When the book was opened its boards rested flat on the table but its tapes or recessed cords bent upwards, leaving a semi-circular space between the back of the book and its cover.  The method was developed in France in the latter part of the 18th century but was not used in England until the early 1800s, when it was widely embraced.  It offered a solution to the stiffness of the tight back book, which had been increasingly lined with too much paper so that the gold tooling on its spine would not crack on opening and closing.

The hollow back was comprised of layers of paper folded so that it formed a tube with a hollow centre.  One side was glued onto the back of the sections, the other to the leather or cloth cover.  If, through wear and tear, the cover deteriorated or was broken at the joints, the false back fell off the book but its gold tooling and titular information remained intact.  This was particularly useful for conservators who would inevitably be required to reback a book at some stage of its life.

The methods of creating the hollow lining varied but most English binders tended to build the lining in situ, directly on the book’s back.  They first lined the back with super or mull and glued a strong but thin strip of paper to the super.  They then took a piece of heavy paper, the grain running across its width, and cut it slightly longer than the length of the spine and wide enough to extend over the back of the book three times.  One straight edge of the width was placed on the back so that it met with the joint, the grain direction of the paper lining running from head to tail of the book.  The full length of the paper was then folded at the point where it met the other joint.  It was then brought over to the first joint and folded a second time.  The back of the book was next glued and the centre section of the folded paper placed and rubbed down on the back.  A piece of wastepaper was placed underneath one of the free folds, which was then glued on its top.  The waste paper was removed and the third fold was placed on the glued surface and rubbed down.  One fold had been glued to the back of the book and two would be glued to its covering material.  Hence the saying: “one on, two off”.  Finally, the excess lining at the headbands was cut off.

On display in this cabinet were the following examples of spine linings: