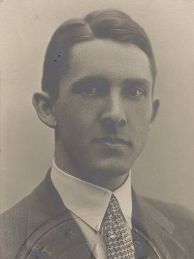 James Cornell was appointed to The University of Adelaide in 1938 as lecturer-in-charge of French.  In 1944 he became the University's first Professor of French Language and Literature, a position he held until his retirement in 1969. He was decorated by the French Government in 1955 with the award of the Chevalier de la Légion d'Honneur for his weekly French broadcasts throughout the war to the French-speaking communities in the Pacific.  In 1984 he was also awarded the Commandeur des Palmes Académiques for his distinguished contribution to the teaching of French and dissemination of French culture within South Australia.

This collection reflects Professor Cornell's particular interest in French language and literature until 1600.  It includes numerous editions of medieval romances and poetry, as well as the works of Villon and influential French Renaissance writers Rabelais and Montaigne. It also encompasses the works of later writers on the French decadents and symbolists, as well as publications issued clandestinely in France during the second World War. Many of the books have been extensively annotated by Professor Cornell and reflect his wide reading and close textual analysis.

Additional works from Professor Cornell's personal library are also held by the Rare Books & Special Collections section of The University of Newcastle.