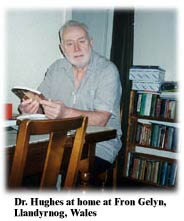 Dr. H.G.A. (Alun) Hughes was born on 15 July 1921 at Pontlotyn, Glamorgan, South Wales, the younger son of the Rev. R.G. Hughes and Ethel Hughes, and lived at Pontypridd, Glamorgan from 1925 to 1939. His early education was at Maesycoed Elementary School and at Pontypridd Boys' Intermediate School. A Meyricke Exhibition in Modern Languages took him to Jesus College, Oxford in 1939, where he studied Spanish and French initially, and then, after the Second World War, Spanish and Portuguese. In June 1940 he joined the Merchant Navy, serving in Norwegian, Panamanian, Swedish and British ships while also engaged in counter-intelligence work. Discharged late in 1944 as no longer fit for sea service, he returned to Jesus College, Oxford, graduating BA (Hons.) and MA in 1946. In 1947, after a teacher-training course at the University of London Institute of Education, he became Research Assistant to Professor Margaret Reade in that Institute's Colonial Department (later renamed Department of Education in Tropical Areas).

From 1947 to 1953 he was Lecturer in Linguistics at the University of London School of Oriental and African Studies, specialising in Oceanic Languages especially Gilbertese (Kiribati), Ellice (Tuvalu), and Sikaiana. Fieldwork has involved research on Gilbertese, Nauruan, Marshallese, Ponapean, Nukuoro, Trukese, Ellice, Tokelauan, Fijian, Tok Pisin, Samoan, and Maori. In 1950, while working in the Gilbert and Ellice Islands Colony, he was invited by the United States Department of Interior to visit the Trust Territory of the Pacific Islands for research purposes; the first non-American to be accorded that privilege. In 1952 he carried out a survey of the language position in Savai'i, 'Upolu and Tutuila (Samoa), on behalf of the United States and New Zealand governments. He studied anthropology with Professor Raymond Firth at the London School of Economics and with Professor Daryll Forde at University College London, and archaeology with Professor Gordon Childe at the University of London Institute of Archaeology.

Falling victim to the endemic McCarthyism of the early 1950s, the rest of Hughes' working life was perforce spent in other disciplines - college administration, librarianship, journalism and translation, film criticism, management, law. He maintained nonetheless his interest in and research on the languages, cultures and history of the Pacific Islands, especially Micronesia and Polynesia. In 1966 he was awarded the Candidát 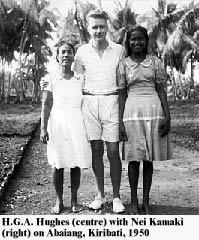 Vet (C.Sc.) doctorate by the Oriental Institute of the Czechoslovak Academy of Sciences (CSAV), for his dissertation External Factors in Culture Change in the Gilbert Islands to 1892, and as a private scholar and writer on the Pacific has been prolific. Recent books include Samoa (American Samoa, Western Samoa, Samoans Abroad) (Clio Press, 1997) and (with S.R. Fischer) a critical edition of An Essay Toward a Dictionary and Grammar of The Lesser-Australian Language, According to The Dialect Used At The Marquesas (1799) (Institute of Polynesian Languages and Literatures, 1998). Dr Hughes has further shown his academic dedication to study of the Pacific Islands by founding the Alun Hughes Graduate Scholarship, tenable at Jesus College, Oxford, to support research and fieldwork on the languages, culture, and history of Micronesia or Polynesia.

Dr Hughes first began donating microfiche and typescript copies of his own research papers to the Barr Smith Library in 1994, prompted by the earlier deposit of the papers of Professor H.E. Maude and the desire to place his papers where they would be preserved and available to future Pacific scholars. Over the past decade he has additionally sent further papers on Pacific, Welsh and local history and language, correspondence with colleagues and institutions relating to Pacific language research, and his book reviews; original and copies of archival and rare published material by others; valuable collections of Pacific language publications (including significant runs of Kaotan te ota, Tala o Tuvalu and Tero) and mission and other island printings; language recordings and contemporary reports and administrative papers collected on field work in the Pacific in 1950-52; and articles and other publications on Pacific language and history by other scholars.

Series 5: Copies of published works by others principally re Pacific languages, 1844-2008

Series 6: Copies/translations of manuscripts and typescripts by others