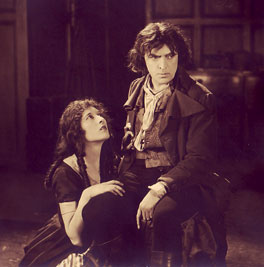 Sir John Martin-Harvey (1867-1944) was one of last great romantic actors of the English theatre.

His first stage appearance was in 1881 at the age of fourteen in a boy's part at the Court theatre, London. The next year he was engaged by Henry Irving at the Lyceum Theatre and remained in Irving’s company for fourteen years, playing minor parts in London but leading parts during summer tours. In 1898 he played Pelleas in Maeterlinck's Pelleas and Melisande, and in 1899 he entered into management with The Only Way, an adaptation of Dickens's Tale of Two Cities, in which he scored his greatest success.

Other successful roles were in A Cigarette-Maker's Romance and The Breed of the Treshams. In later years he was active in promoting the production of Shakespearean plays, both in London and in the provinces, playing the leading parts himself, and also achieving success in OedipusRex (in Max Reinhardt's 1912 Covent Garden production), Bernard Shaw's The Devil's Disciple, and Maeterlinck's The Burgomaster of Stilemonde.

During World War I Martin-Harvey delivered recruiting lectures throughout the United Kingdom, and raised substantial contributions for the British Red Cross and other causes. He was knighted in January 1921.

These papers were bequeathed to the Barr Smith Library in 1976 by Angel Symon as part of The Allan Wilkie - Frediswyde Hunter-Watts Theatre Collection held in Special Collections. The photograph of Martin Harvey as Petruchio was donated by Dave and Madelyn Hall and the Royal Manitoba Theatre Centre in February 2015.

Notes, mementos, souvenirs and prompt books for productions of The Only Way, a dramatised version of Charles Dicken's novel, A Tale of Two Cities, adapted by Freeman Wills from the novel in 1897. The play was first produced by Sir John Martin-Harvey at the Lyceum Theatre on February 16th 1899. The items collected chart the various productions of the play involving Sir John.

1.2. Notes on Carton's speech in Act 3 (in Wills' handwriting). 5 leaves 1.3. Early notes for the construction of The Only Way, sketches for scenery, characters or props. 2 items

1.9. The Only Way - copy from which the printed play was proofed, 1942. 1 annotated typescript

1.10. Framed portrait of Martin-Harvey as Sydney Carton in The Only Way.1 picture, inlayed in natural coloured woods

Production notes and prompt books for other productions, 1898?-1913

2.1 Notes for Macbeth [1898?] 1 notebook in envelope
Sketches and holograph notes of stage and scenery designs for Macbeth, plus postcard of Carisbrook Castle

2.2 Promptbook for Olivia by W.G. Wills [1900?] 1 volume (66 leaves)
Grangerized text pasted onto ruled A4 leaves and MS annotations on first page only. In envelope, with captions: "Unbound copy of 'Olivia' G.W.G. Wills -- as produced by Irving at the Lyceum Theatre" and "Allen - the prompter's copy.'

2.3 Promptbook for Hamlet, Prince of Denmark, from Martin-Harvey's production at the Lyric Theatre 1905-1906? 1 volume
Grangerized text pasted onto ruled A4 leaves, with holograph annotations and stage directions, and 2 folded sheets of sketches of drum cloths and platforms

2.4 A few notes re production of Taming of the Shrew 1913
Comprises 8 leaves of holograph notes and sketches (some col.) for scenery designs and details, plus 1 envelope with notes on verso ; 1 leaf of stencil design for curtains ; 6 leaves of costume and hair-style designs (come col.) ; 5 letters from George E. Kruger re scenery and costume design and construction

2.5 Framed photograph of Sir John Martin Harvey as Petruchio in The Taming of the Shrew (sepia, 36 x 26 cm.)