Most of these papers were donated to the Barr Smith Library in 1981 by Mrs. Kate Wilkie, widow of Allan Wilkie.
Additional notebooks and scrapbooks, identified by an asterisk, and some additional photographs, loose cuttings (1949 and 1954-59) and programmes were purchased from Mr. John East in 2002. 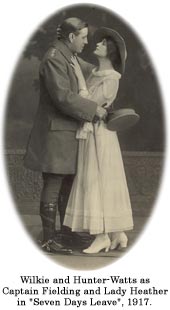 2.  Newspaper cuttings, most about Allan Wilkie (including obituaries) but also on theatre more generally, and with some articles by Douglas Wilkie. c1910-1970.
* also 3 separate albums of press notices of and advertisements for performances by the Company in Australia and New Zealand April-July 1922, July 1927-January 1928 and February-April 1930. 3 v.

4.  Allan Wilkie's unpublished autobiography All the world my stage: the reminiscences of a Shakespearean actor-manager in five continents.  c1959-60  typescript. (2 copies)
Note: a microfiche copy of this has been made and should be used for any further copying.
see also Series 3 for original of Preface by Ngaio Marsh

5.  Letters 1916-1970.  approx. 300 items.
[Includes numerous letters of congratulations on Wilkie's decoration 1925 and of sympathy on the death of Frediswyde Hunter-Watts 1951; letter of Jack Lindsay November 1934 with copy of a paper on 'The Drama in Australia'; and correspondence with Ngaio Marsh 1961]
*additional letter from Walter Murdoch to Douglas Wilkie, 11 June 1956, regarding Allan Wilkie's important contribution to Australian culture.
Also 1 letter from Wilkie to Margaret Symon 1951, 18 letters from Wilkie to Angel Symon (also called ‘Simp’) and Mary Clarke 1958-67, 1 letter from Wilkie to Perdita Eldridge 1991, and 1 letter from Douglas Wilkie to Perdita 1990? (donated by Perdita Eldridge 2014 as additions to the Theatre Collection)
see also Letters of introduction etc. in Series 3.

7.  Photographs (original and reproductions in magazines etc) c1916-41.
[Mostly Wilkie and Hunter-Watts, but a few of members of their Company and others (including Ngaio Marsh) and a framed print of the Theatre Royal, Hobart]
Note: ten oversize items are in box on SR/E shelves
see Special list

13.  Photocopies of title pages of books and journals from Allan Wilkie's library
[Some purchased by the Barr Smith Library in 1981 and added to the Allan Wilkie-Frediswyde Hunter-Watts Theatre Collection donated by Mrs F.A.N. Symon in 1976]