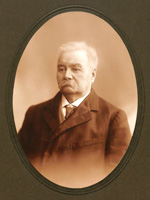 Robert Barr Smith died on 20th November 1915 at the age of 91 leaving an estate of £1,799,500, the largest in South Australia up until that time. He had been a prominent businessman and a legendary philanthropist, the owner of several stately homes and a prominent member of the social scene. His private funeral was attended by the Premier and representatives of the University of Adelaide, the business community and South Australian society.

And yet the only memorial to perpetuate his name is the Barr Smith Library, built through the donations of his son, Tom Elder Barr Smith, and other members of the family.

Robert Barr Smith was modest and disliked the ‘laudatory notices’ which accompanied much of his philanthropy, but despite his wealth he was frugal by nature. He believed in education for all, hard work and free enterprise, and had a wide range of interests. He was devoted and generous to his wife and his family, appreciated intelligence in his friends but could not abide fools, and detested pomp and pomposity. He did not adhere to any religion, but was friendly with members of all religions and gave generously to Anglican and Catholic causes. In brief, he was a complex personality.

Like so many other major benefactors, the Barr Smith name is prominent but little is publically known of the man – of his character, his interests, his likes and dislikes, and his legacy. There has been no major biography dedicated to Robert Barr Smith or the Barr Smith and Elder families. These pages will attempt to give a fuller picture of the person behind the name.

In 1996 The Barr Smith Press published Joanna and Robert: the Barr Smiths’ life in letters 1853-1919, edited by Fayette Gosse whose husband, Jock Gosse, was the great grandson of Joanna and Robert Barr Smith. Much of the substance in these pages has been adapted from Fayette’s work which is now available online.