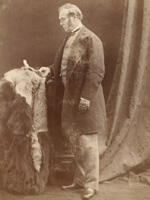 Robert Barr Smith and his partner and brother-in-law Thomas Elder instigated one of the most extensive and successful companies in Australia. Elders, Smith & Co. was directly or indirectly concerned with every branch of commerce – mercantile, shipping, mining, pastoral, and financial.

The beginnings of the company occurred in 1839 when Alexander Elder, aged 24, set sail from the Port of Kirkcaldy with a cargo of goods to sell in South Australia and established himself as ‘A.L Elders, General and commission agent’. He was joined by brothers William and George, who all later returned to Scotland to be replaced by youngest brother Thomas in 1854 at the age of 36.

Scottish born Robert Barr Smith, after graduating from the University of Glasgow, worked in commerce before moving to Melbourne in 1854 as a partner in the merchant firm of Hamilton, Smith & Co. He was invited to come to Adelaide to replace George Elder in the mercantile and pastoral firm of Elder & Co. Two years later the name of the business was altered to Elder, Stirling & Co. on the admission of Mr. Edward Stirling and Mr. John Taylor as partners. Following Taylor’s retirement the firm became Elder, Smith, and Co., and Robert and Thomas became sole partners in the company.

In 1887 Thomas Elder became ill and Robert wished to sell the company and retire, but instead the company was floated with Barr Smith as Managing Director and Peter Waite as Chairman. In 1889 Robert Barr Smith resigning the managing directorship, but remained on the Board for a considerable time, before being succeeded by Walter Reynell. 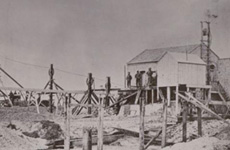 In 1859 Elder Smith & Co. financed the Wallaroo and Moonta Copper mines of W.W. Hughes which, after some initial losses, brought large returns to the partners of the company as well as attracting settlers to Yorke Peninsula and providing a great economic boost to the colony of South Australia. Years later Robert described the early years in a letter to George Elder: "So far as Tom Elder & I were concerned whilst the Wallaroo & Moonta brought us profit it also added to the burden of our finances. In fact we could not have carried on these mines but for the large credits in the sheep farmers' accounts ..." (p. 20) 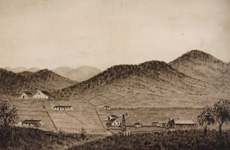 Elder Smith & Co. pioneered the opening of outback South Australia. Their property empire survived the drought and depression of the 1880s with the backing of their profits from mining and, under the astute management of Peter Waite, they set to drought-proofing their holdings through fencing and establishing bores and wells which allowed free ranging of sheep as opposed to expensive shepherding. The company also held pastoral leases in Queensland, New South Wales and Victoria, paved the way for trade and settlement in much of the interior, and found profitable markets for Australian produce.

Robert Barr Smith had vast pastoral leases of his own, and in partnerships with Sir Thomas Elder and others. His first property, Yalata station, was established at Fowlers Bay in the 1860s in partnership with William Swan. Its boundaries eventually stretched from the Head of the Great Australian Bight to Streaky Bay. Other South Australian stations included the Hummocks, Bundaleer and Warrakimo. Ned’s Corner run covered 1,300 square miles in NW Victoria and 100 miles in adjoining South Australia. The SW Queensland runs of Gooyea, Tintinchilla, Welford Downs and Sedan were amalgamated to form the company Milo and Welford Downs. Milo’s largest clip was taken in 1891 when 507,774 sheep were shorn for 6,232 bales of wool.

In the early 1880s Elders, Smith & Co were shearing at least 1.5million sheep across their properties, yielding conservatively 30,000 bales. The land owned in partnership between Elder and Barr Smith was larger than the mass of their native Scotland.

The brothers-in-law remained loyal and true friends throughout their association. Fayette Gosse in her family biography The Gosses commented:
“Elder and Barr Smith complemented each other: Elder had imagination and Barr Smith had the analytical brain and they both had plenty of drive, courage and commonsense. Between them they built up a huge industry.” (p. 148) 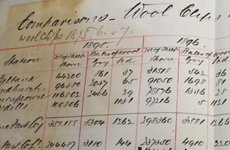 Robert’s drive and energy was certainly astounding. His had a fervent need for knowledge and recorded a wealth of information in his ‘Commonplace Books’ – regarding wool clips, estates, wills, fencing, sales of rams, other property syndicates, lists of shares and so on. He was also a fervent letter writer, sending letters of up to 14 pages long to his business associates, personal retainers and family. While in London in 1884 he sent some 500 pages of messages in a single seven month period. (p. 65).

It is however interesting that, considering his extensive private and public philanthropy, Robert Barr Smith was unsympathetic with the conditions and wages of those that worked in the mines and on the properties, and with whom he was at times in dispute. As a businessman of his time, he aimed to improve profits and amass wealth which he could then distribute to improve the fortunes of the state and its population. 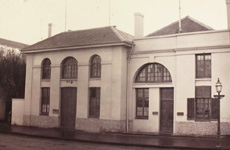 Picture - 1870 Moonta Mines. Courtesy of the State Library of South Australia B 12597