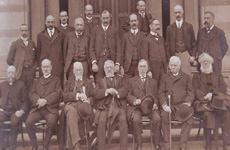 On the 5th February 1914, in acknowledgement of a letter of congratulations from the University of Adelaide on attaining the age of 90 years, Robert Barr Smith wrote (in his eccentric typing with many mis-spellings):

Glad as I am to be of use to the Public and University, I am afraid your friendly feeling for me prompts you to attribute to me more than I can modestly or honestly claim. I can however, say with truth that whatever I have done in this direction has been a labor of love. I trust not wholly lost.

I cannot hope for long life, but I trust to see the foundation laid of further important developments. With the help of a wholly friendly Government and a frankly acquiescing public, dedicating the necessary land, we may soon have sightly and sufficient Buildings for all Educational purposes. A University which outwardly, is not unworthy of the State and City and which, though its foundations are not laid in marble, are stable in the love, pride and confidence of the whole Community.

Robert Barr Smith was a firm believer in the value of education and had been associated with the University since its very beginning. He had been a member of Council for 19 years, and had provided financial support in avenues ranging from supporting the radium research of our future Nobel Prize winner Professor William Bragg to the tune of £500, to funding the early Library.

During the early years of its life the University Library struggled to support the teaching and research needs of its community, with no Librarian and an average annual expenditure of £200 between 1877 and 1891.

“If you approve, and if the Council of the University are willing to accept it, I would like to make a donation of a thousand pounds, for the purchase of books, to make the commencement of a Library for the University.” 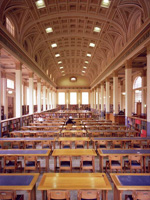 Over the following years there were further gifts, totalling some £9000 by the time of Robert Barr Smith's death in 1915, the books purchased with his endowment gold stamped on the covers as ‘Barr Smith Library’. Even after his death the Library continued to receive generous support from his family, his son Tom Elder Barr Smith donating £5000 in 1920 "for the purpose of creating a Barr Smith Library Fund" with a further £6000 donated the following May by Tom and other members of the family.

The Barr Smith legacy is commemorated in friezes which read: 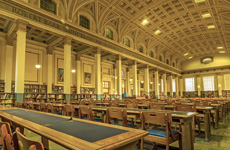 As Fayette Goss remarked Joanna and Robert “there could have been no better memorial to the old man who cherished books, venerated education and came to love Adelaide as his home.” (p. 253)

Robert Barr Smith was keen to extend University education to all. In 1913 in his 89th year he drafted a letter to offer £10,000 (if matched by a government subsidy) to build a Common Hall’ where Professors and Students may meet and dine together in friendly social intercourse, more as comrades than as Master and Pupil.” He wrote of the pride the University must take in its professors and students, and was troubled that the University “tho' in its vigorous and lusty youth” was poorly endowed and built on too small a site. Perhaps inspired by his years of impoverished study at Glasgow, he advocated the establishment of residential colleges “to meet the cases of those students in all districts whose parents are unable to pay for lodgings” and who must find work to help pay their fees, commenting: “These Students are probably the best as they display courage and ability to face difficulties and know independence of spirit which is truly admirable.” Elsewhere he expressed the desire that: “Every Student in Adelaide shall ultimately have as good a means of pursuing knowledge here as he could have in any part of the world.” (p. 253-4)

These idealistic plans were disrupted by the Great War and Robert’s death in 1915. The offer of £10,000 lapsed. Even so his gifts to the University over the years amounted to £11,000, supplemented by many other generous gifts from the family. Robert’s brother-in-law, Sir Thomas Elder, endowed the Chairs of Mathematics and Natural Science and the Elder professorship of Music. Bequests from Elder’s estate funded the building of the Elder Hall and the establishment of the Elder Conservatorium of Music. Many of Elder’s would appear to have been also supported by Robert, with evidence from the Robert Barr Smith ‘Commonplace’ books showing the funds had been paid out of the accounts of Elder Smith & Co.

Letter 29 March 1892 from Robert Barr Smith to Sir Samuel Way offering £1,000 for purchase of books for the commencement of the Library
- Transcription