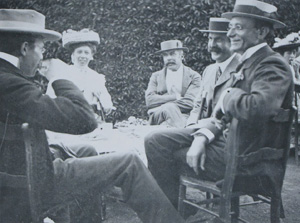 W.H. Bragg arrived in Adelaide in 1886 as an inexperienced and unsophisticated young man of 23.

On his first day, Bragg was invited to supper at the home of Charles Todd, the South Australian Government Astronomer, Postmaster-General and Superintendent of Telegraphs. Bragg delighted in the cheerful social atmosphere of the Todd family, and over the following months became particularly fond of Gwendoline, one of Todd’s four daughters.

They became engaged in January 1888, married at St Luke’s in Whitmore Square and rented the North Adelaide home of the silversmith, Henry Steiner, where their two sons were born (William Lawrence in 1890 and Robert Charles in 1892).

After returning from study leave in England in 1899, the Braggs built a new two story family home on the corner of East Tce and Carrington St (later to become the Public Schools Club). Bragg’s daughter, Gwendolen Mary, was born there in 1907.

Adelaide was crucial to W.H. Bragg’s development as a mature individual, family man and public figure. Gwendoline introduced him to Adelaide’s young society, and comforted, encouraged and calmed her often anxious husband.

After attending Queen’s College and St Peter’s college, the gifted but socially immature W.L. Lawrence enrolled at the University of Adelaide in 1906 at the age of 15, many of his classes being taught by his father. He graduated in 1908 with a first class honours in mathematics but did not concentrate on physics until his later years at Trinity College, Cambridge.