Soon after his arrival, Bragg agreed to teach a course in acoustics to second-year students in the music course. This led him to investigate and suggest improvements to the acoustics in both the Conservatorium’s classrooms and the main Hall. It was also on his advice that the University decided to use electricity instead of gas for the supply of air to the organ which was installed in 1901. 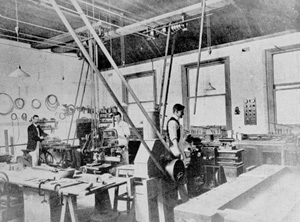 Much of Bragg’s correspondence with the University Registrar and Council is dedicated to the acquisition of scientific apparatus and equipment and requests for alterations to the ‘Physical Laboratory’.

One of Bragg’s inspired appointments occurred in 1889 when Arthur L Rogers was appointed as a ‘Skilled Mechanic’. A highly experienced instrument-maker, Rogers constructed a variety of apparatus including x-ray tubes, radio equipment and all the items used for Bragg’s alpha-particle and gamma-ray experiments. So admired was his skill that one of Bragg’s last actions before his departure at the end of 1908 was to ask the University Council for an increase to Rogers’ salary.

While overseas on study leave in 1898, and encouraged by his father-in-law, Postmaster General Charles Todd, Bragg met with Guglielmo Marconi and discussed his experimental work in radio waves. On returning to Adelaide and in collaboration with Todd, he started his own research on ‘wireless telegraphy’, sending Morse messages over increasing distances which culminated with a message sent from the city Observatory to Henley Beach – approximately 8 kilometers.

University teaching and administrative duties meant Bragg was unable to dedicate time to pursue this line of research, but it provided him with further experience in experimental physics, bringing him ever closer to the original research that would bring him acclaim. 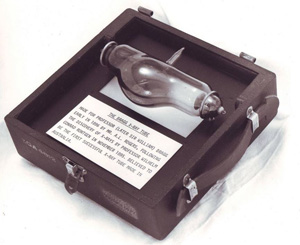 In 1895, x-rays were discovered by Wilhelm Röntgen. When Bragg learnt of this, he asked Rogers to make him a suitable glass tube but without success. However, their persistence was rewarded and by the middle of 1896, successful demonstrations were being given and a public lecture on the topic saw people turned away. The lectures continued into the 1900’s with Bragg providing the public with updates and demonstrations of his research.