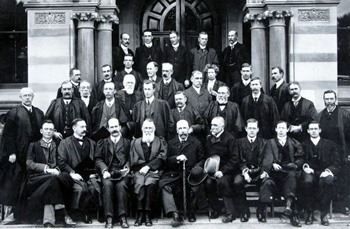 At the time of his appointment, Bragg had no knowledge of physics but was able to undertake study during the long voyage to Australia and began an elementary course on commencement of his tenure. However, even the most basic items – such as sufficient furniture, books and equipment – had to be acquired to ensure his classes proceeded. His success was immediate and resulted in requests for evening classes which led to an increase in workload that required the appointment of an assistant lecturer in 1888.

Bragg was deeply engaged with education and its delivery. He had strong views on the need for ‘practical’ education which he put forward in an address he delivered at the University of Adelaide’s 1888 commemoration.

Believing that the greatest work a colonial university could do was to act as a centre for all education, Bragg encouraged teachers to attend his lectures free of charge. The University had, from its outset, increased public access to knowledge via a program of public or 'extension' lectures. The series conducted by Bragg proved highly successful and were regularly reported in newspapers.

One of Bragg’s early contributions was made after his appointment to the Council of the School of Mines in 1890. He wrote to the University’s Education Committee encouraging the establishment of a course in Electrical Engineering. The report was adopted and the course commenced the following year under Robert Chapman, who Bragg had appointed as an Assistant Lecturer in 1888 and went on to become the University’s first Professor of Engineering.

While Bragg was an able and popular lecturer, he was involved with many other aspects of the University and was instrumental in the formation of the student union in 1895.