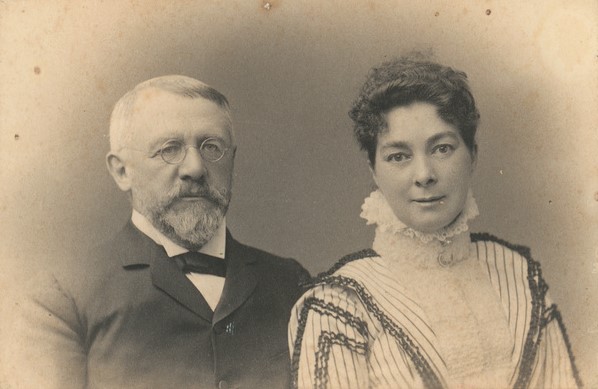 Samuel James Way was born at Portsmouth, England, on 11 April 1836. He was educated at the Bible Christian Grammar School at Shebbear, North Devon, and at the Maidstone Road school at Chatham. When his family emigrated to South Australia in 1850, the 14-year old Samuel remained behind to finish his schooling, migrating to rejoin his family in March 1853 when he was 17 years old, the colony of South Australia only 16 years old with a population of 126,800.

Samuel’s two years at Shebbear and three years at Chatham were the only formal education he ever had. He could not in England have progressed to Oxford or Cambridge University as at that stage they did not grant degrees to non-Anglicans.

Samuel’s birth and his education would never had allowed him to be articled as a solicitor, be called to the bar or become a judge. Following his family to South Australia was one of the most important decisions of his life, as in the young colony he was exposed to opportunities that would not have been possible in England.

James Way and The Bible Christians

Unlike many of his peers, Way did not have the advantage of a wealthy and influential father. James Way was a poor but highly respected Bible Christian preacher who in 1847 was president of the English Bible Christian conference. The Bible Christians, a small Methodist denomination, were formed in 1815 in Shebbear, North Devon, in response to a lack of regional support from any other denomination – including the Wesleyan Methodists. James Way had been continually transferred – from Portsmouth to Exeter, the Isle of Wright, Bideford and Chatham. While at Chatham he was asked to emigrate to South Australia to become minister to the many Bible Christians who worked in the Burra Mines. In 1850 James, his wife Jane, and four younger children – Florence, Elizabeth, Edward and Jane – left England for Adelaide.

Way always acknowledged he owed his success in life chiefly to his father – and his attributes of a deep religious faith, and his courage and determination in the face of privation and discouragement. He was always ready to speak at Methodist functions, open churches and speak at innumerable church anniversaries, and was one of the chief advocates of Methodist union in 1900.

In 1885 it was suggested at the Bible Christian Conference that a college should be established and named Way College in honour of James Way and his work. Subscriptions were called for, contributions included Samuel Way with £500 and £105 from Sir Thomas Elder. The College was opened in 1892 in buildings on Greenhill Road, Wayville, under the distinguished leadership of Mr W.G. Torr, and trained boys for University entrance, in practical or technical training, or for the ministry. In 1903 Way College was merged with Prince Alfred College on the Union of the three Methodist Church groups in 1900, and the premises were taken over by Methodist Ladies College (now Annesley College)

The Bible Christian Shebbear College in North Devon was founded to provide primary education for boys intended for the ministry. Samuel Way studied there for only two years but continued to take a great interest in the school. During his visit to England in 1891, he presented the prizes at the annual speech day and concluded his speech by presenting to the school the title deeds of the adjoining Lake Farm property (the site of the original Bible Christian society.) Shebbear College still exists as a Methodist independent boarding school and still derives income from Way’s gift.

On arrival, he had to look round for a job and unsuccessfully applied for employment with the Bank of SA, the Post Office, the Public Service and the Burra Mining Copper Company - all of which were refused. Eventually he obtained employment as a junior clerk in John Turhill Bagot’s law office in King William Street.

In 1898, on his 62nd birthday, Way married Katharine Gollan (Kitty) Blue, a 44-year old widow with an adult family, and the daughter of a respected Adelaide doctor. He had known her since she was a child, and fifteen years before they married, while she was still married to Dr. Blue of Strathalbyn, she had been a regular guest of Way, staying with him at his house in North Adelaide

It proved to be a very happy union. Kitty was by all accounts a woman of great charm, intellect and tact, and served as a gracious hostess for the many gatherings at Montefiore. She provided Way with necessary intellectual companionship, as well as taking an interest in charitable and social causes, especially in support of women and children.

In June 1904 she addressed the National Council of Women and looked forward to life in 2000 when women would be free of household duties, would wear short hair and sensible clothes, and men would stay home with the children while women became the breadwinners. According to her obituary in The Register of 15 May 1914, Kitty was actively involved with the work of the Adelaide Children’s Hospital, the State Children’s Council, the Queen’s Home, the Mothers’ Union, the District Trained Nursing Society, the Home for Incurables, the Lady Victoria Buxton Girls’ Club, and the Girls’ Friendly Society as well as the Ministering Children’s League, the Young Women’s Christian Association, and the Travellers’ Aid Society. Since its inception she had been President of the Queen Adelaide Club, and had taken a personal interest in the Victoria League, the Alliance Francaise and the golf and tennis clubs.

After 16 years of marriage, Kitty died in 1914 from kidney dysfunction, two years before Way.

Samuel enjoyed a close relationship with his younger brother, Edward Willis Way. Edward emigrated to South Australia with his parents in 1850, and was educated at the Adelaide Educational Institution and St Peter’s College. He returned to England to study medicine at Guy’s Hospital and the University of Edinburgh, where he learnt from Lord Lister the use of antiseptics which he applied so successfully in his surgery.

He developed a popular and lucrative practice on North Tce, but spent much of his time engaged in public service as Medical Officer to the Stockade (now Yatala Prison) and Health Officer to the Adelaide City Council. Along with his brother in law, Allan Campbell and Samuel Way, he was one of the founders of the Adelaide Children’s Hospital, and was associated with the Home for Incurables and the Convalescent Home. He was on the Council of the University of Adelaide, lectured in Obstetrics and the Diseases of Women and Children at the University of Adelaide and was on the board of the Adelaide Hospital. In 1896 he was accused of nepotism by Premier Kingston (who was antagonistic towards Way) when one of his daughters, Bessie Way, was promoted to Charge Nurse. Bessie sidestepped the awkward situation by accepting a better position at Kalgoorlie Hospital.

He suffered from heart disease for many years which forced him to reduce his workload and take holidays. In 1891 he cruised the Pacific islands and fortunately met with his brother Samuel in Japan, treating him for a severe bout of influenza. Edward died suddenly in 1901 while performing a surgical operation at his North Adelaide Private Hospital.

Elizabeth Way married Mr Beach, a confectioner/baker, who went to the gold diggings and apparently “did very well.”

Jane, Way’s much loved younger sister, was an invalid confined to bed for most of her life. She spent most of her time knitting, the proceeds she donated towards missionary work. Way would write long letters describing his travels for her amusement. She died at North Adelaide in 1873 at the age of 33 of “caries of the spine.”

Florence Ann Way, Way’s younger sister, was his lifetime confidante and advisor in social and personal issues. Way would call at Florence’s North Adelaide house almost daily for a chat. Before his marriage to Kitty Florence also acted as hostess for Way when he entertained at Montefiore. Florence married Dr Allan Campbell in 1877 and partnered with Campbell and Way in their many philanthropic works.

Like Way, Campbell was public-spirited and was on the Committee of the Society of Arts, and on the Board of Education. For five years he was a member of the Adelaide University Council, and a member of the Technical Education Board, whose report resulted in the establishment of the South Australian School of Mines and Industries. He also served as President of the Literary Societies' Union and the Institute of Architects, and was chairman of the board of governors of the Museum, Public Library, and Art Gallery.

A member of the Franklin Street Bible Christian Church, he took a devoted interest in the health and wellbeing of the poor and in women’s and children’s health. He was on the Central Board of Health and was pivotal in Adelaide becoming the first Australian capital to undertake a deep-drainage sewage system. When an epidemic struck the city, Campbell and his brother Dr William Macdonald Campbell rented a Currie Street shop which they called the Children's Outpatients' Dispensary, and treated the sick with homeopathic medicines, often free of charge.

Campbell was one of the prime movers behind the establishment of the Adelaide Children’s Hospital, and helped found the district Trained Nurses’ Association and the Queen Victoria Home for Convalescent Children at Mount Lofty, which was opened the week he died.

On his death in1898, Way wrote: “He was for 30 years and more my most intimate friend … the recipient of my most sacred confidences.”

The children of Samuel and Susannah

Way ensured his sons received a good education, including at Geelong Grammar School in the company of the sons of Australia’s rich and famous. Alfred Edward Rowden and Edward Rowden, who both adopted the surname White, studied at the University of Melbourne and became respected Victorian medical practitioners, serving in the medical corps during the two world wars. Alfred Edward was knighted in 1961 in recognition of his distinguished career and his philanthropy. Alfred Edward and Edward Rowden share an entry in the Australian Dictionary of Biography which acknowledges Way as their father, although Samuel Way’s entry makes no mention of his children.

Susannah had already borne two children before they met in 1867, and Way treated these as his own. John Andrew (b 1865 and educated at Scotch College Melbourne) and Lydia Maria (b 1867) lived with the family in Tasmania, Carlton and Parkville and all assumed the surname of White.