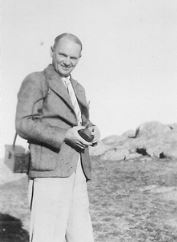 Thomas Draper Campbell (1893-1967), Professor of Dentistry and anthropology at the University of Adelaide, was born at Millicent, South Australia, the son of Walter Campbell, storekeeper, and his wife Lucy, née Walters. In 1907 the family moved to Adelaide where Draper attended Prince Alfred College. He qualified with the Dental Board of South Australia in 1917 and in November joined the Australian Army Medical Corps Reserve (Dental) as an honorary lieutenant. After studying at the Elder Conservatorium of Music in 1919, he entered the University of Adelaide (B.D.S., 1921; D.D.Sc., 1923). On 9 December 1927 at the Methodist Church, Archer Street, North Adelaide, he married an actress Elizabeth (Bess) Jane Young; they were to remain childless.

Campbell was House surgeon at the Adelaide Hospital's Dental department from 1921, and became superintendent in 1926. He had also taught dental anatomy at the University from 1925, and was Dean of the Faculty of Dentistry from 1938-58, and Director of Dental Studies from 1949 until 1954 when he was appointed foundation Professor. Campbell was a competent clinician, and a skilful oral surgeon; he maintained a special interest in child dental health. Despite his gruff voice, he was a kindly, spirited and informed teacher who relished debate. He was a fellow of the Royal colleges of Surgeons, England (1948) and Edinburgh (1950), a member (1952) of the odontology section of the Royal Society of Medicine, London, and a fellow (1966) of the Australian College of Dental Surgeons.

With his colleague Frederic Wood Jones, Campbell had made two excursions to remote parts of South Australia in the early 1920s which developed his interest in physical and cultural anthropology. His doctoral research—published as Dentition and Palate of the Australian Aboriginal (1925)—noted the difference between the Aborigines' well-formed dentition’ and the 'ill-formed, disease-stricken' teeth common in Europeans. The book set new standards for the emerging discipline of dental anthropology.

Honorary curator (1924-40) and a board-member (1932-66) of the South Australian Museum, in 1926 Campbell helped to establish the Anthropological Society of South Australia (of which he was President, 1928-29 and 1944) and the University's Board for Anthropological Research (of which he was secretary). Between 1925 and 1939 fifteen expeditions travelled to outback South Australia and the Northern Territory. Campbell organized most of them and accompanied eight. Small teams of scientists from different disciplines contacted tribal Aborigines, often for the first time, and published their findings. Their cinematographic records of Aboriginal life and customs provided unique insights, and were later screened at universities in Europe and the United States of America. In 1939 Campbell was awarded a D.Sc. by the University for thirty-seven papers arising from his field-studies.

In 1951 he led a team of scientists to Yuendumu, an Aboriginal settlement north-west of Alice Springs, Northern Territory. Over the next decade he directed several ethnographic films about the crafts and skills of the Yuendumu people, whom he greatly admired. His significant studies of Aboriginal camp-sites and stone tools culminated in his 1963-65 investigation of archaeological sites for the Australian Institute of Aboriginal Studies, of which he had been a founding member. Campbell's classification of stone tools became the typology used in Australia. Survived by his wife, he died on 8 December 1967 at his Tusmore home and was cremated. His portrait (1959) by Ivor Hele is in the Adelaide Dental Hospital.

The slides listed in Series 1 were donated to the Library by Professor Campbell in 1962. In 1981 the Library received a small grant from the Board for Aboriginal Studies to have 35mm negatives and prints made from the glass slides.

Series 2-4 were transferred from the Craniofacial Biology Research Group Laboratories of the School of Dentistry in May 2015. These records had originally been donated to the School by Mr R. Edwards in 1992.

Further papers and photographs related to Draper Campbell and the Board of Anthropological Research expeditions are held by University of Adelaide Archives and the South Australian Museum.

In 1986 the slides were examined by a member of the Pitjantjatjara community with a view to identify those depicting sacred and restricted sites, ceremonies and objects. On the basis of this advice, some of the slides have been restricted and can only be accessed by bone fide workers in the field of aboriginal studies or to researchers with written authorisation from the Chairman of the relevant Aboriginal Community Council.

Scrapbook containing ‘Record of weekends, trips, expeditions and holidays: from 1916 to eternity’ Typed and ms list of trips undertaken by T.D. Campbell from 1916 to 1954. Some entries include itineraries and names.

Photographs have been largely left in sets as received

2.2/5. Aboriginal portraits and groups (in album)

University of Adelaide Board for Anthropological Research. Agendas and minutes of meetings October 1964 – July 1966

Typed and ms drafts of a text on Prognathism, with single ms page ‘Two important features of the Australian dento-gnathic system’

Bibliography cards of Campbell’s publications, and of articles with lists of people supplied with reprints. Photocopy of bibliography listing.