Bound to Please: The Iconic Victorian Binding in an Era of Industrialisation and Mechanisation 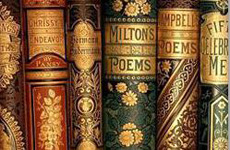 The Victorian era (1837-1901) was an exciting time. Rapid and unregulated industrialisation brought with it tremendous social and political change and saw technological advancements in nearly every sphere. Book binding was no exception.

This fascinating exhibition explores the evolution of the book as it transitions away from the traditional methods of hand-binding towards the exquisitely gilt-blocked and mass-produced publishers’ cloth binding.

On the 20th of June 1837, at the age of just 18, Alexandrina Victoria Kent ascended the British throne.  She would become England’s longest serving monarch, reigning until her death in 1901, and although this record is set to change in September 2015, Queen Victoria remains the first British monarch to see her name given to the period of her reign whilst still living.

The Victorian Age was an exciting time.  It was a period of dramatic and unpredictable change that brought England to its highest point of development as a world power.  Advancements were made in every sphere.  From medicine to manufacturing, from education to science, not one field was left unturned. There were challenges to religion, with Darwin’s theories of evolution and natural selection undermining the position of the Church, along with changes to the size and location of the population as large numbers of agricultural workers migrated from the country to the cities in search of factory work.

Improvements in steam transport, particularly during the second Industrial Revolution (1840-1870), combined with large-scale production of textiles and machine tools, further accelerated and expanded the economies of Europe, eventually laying the path for a global economy that favoured industry over agriculture.  There were fundamental changes on the home front too.  Widely disseminated was now the ideology of separate spheres for men and women; the latter assigned the private sphere, a haven away from that chaotic, public world of commerce and politics considered the domain of the (middle or upper- class) man.  The social classes of England were reforming.  Middle classes were steadily growing and a new wealthy commercial class was emerging.

The Victorian Age certainly began with a confidence and optimism that led to prosperity and social advancement for many.  However, it was also a period fraught with complexities.  Such rapid and unregulated industrialisation brought with it an uncertainty about Britain’s place in the world; it had dispossessed farmers from their land, trapping thousands of families in poverty-stricken, over-crowded cities and deprived rural women of valuable employment as their jobs disappeared into the factories.  The gap between the “haves” and the “have-nots” widened considerably and, for many, the rate of change was utterly alarming.  England had transitioned from a way of life based on the ownership of land to a modern, urban economy which brought with it a host of social and economic problems.

Cabinet 1: Leather Bound Books of the Victorian Era At the beginning of the 19th century the old method of printing and binding books remained virtually unchanged since the invention of printing in the 15th century. Until the early 1820s books were not sold ready-bound; rather as loose sheets, sometimes in paper covers, allowing them to be easily transported and bound according to the purchaser’s wishes. Learn more

Cabinet 2: The Origin of the Publishers' Cloth Binding Rapid changes to Britain's social structure throughout the 19th century led to a significant increase in literacy and the demand for reading material. This, combined with the new educated elite’s capacity to purchase books and the technical developments in printing, including the steam-driven rotary press, led to significant changes in the way the book trade was organised. Learn more

Cabinet 3: Gold Tooling Perhaps the most handsome way to finish a book is to embellish it in gold. On display in this cabinet are some of the finest examples of decorative leather and cloth bindings, each one tooled, embossed, stamped or blocked in gold. Finishing methods such as these vary greatly in their application but the final results can be difficult to discern. Can you spot the difference? Learn more

Cabinet 4: More Examples of Gold StampingEmbellished covers continue in cabinet 4, where patterned grain cloth binds some of the more interesting titles of the 19th century, including The universe: or, the infinitely great and the infinitely little and Things a lady would like to know concerning domestic management and expenditure: arranged for daily reference with hints regarding the intellectual as well as the physical life. Learn more

Cabinet 5: Types of Cloth When cloth first emerged in England as a binding option in the 1820s, its colour and treatment was carried out by the binder as an ancillary operation.  Fabrics were mostly cotton, although some binders did experiment with silk.  Early cloth tended to hold dark colours better and, as a result, many books appeared in puce – a dark, reddish brown. Learn more

Cabinet 6: Cover Design In the early part of the 19th century book cover design was somewhat restricted. Constrained by the tools and technology available to them, book-binders used hand-held, heated brass and iron rolls and stamps to decorate leather covers and spines. The roll, comprised of a wooden handle attached to a wheel with a continuous, engraved circumference pattern, was used to... Learn more

Cabinet 7: The Art Nouveau Influence... The ornate cover designs continue in cabinet 7, where the Art Nouveau influence, with its stylised leaves, branches and flowers, is evidenced on the cloth covers of Langton Douglas' Fra Angelico, James Allen's A Kentucky cardinal; and aftermath and Alexander Gilchrist's Life of William Blake: with selections from his poems and other writings. Learn more

Cabinet 8: The Curator's Collection I was first introduced to the beauty of Victorian publishers' cloth bindings in my early twenties when my Grandmother passed down to me a handful of antique books. One of those family heirlooms was a remarkable 1646 edition of Desid: Erasmi Roterodami Colloqvia familiaria…by the Dutch theologian, Desiderius Erasmus. I was completely enthralled with this... Learn more

Cabinet 9: What Drives Us to Collect? The psychology of collecting is both fascinating and enlightening. What we collect can often provide others with meaningful insight into our personality and our life experiences. For many, the term “collecting” tends to conjure up ideas of acquiring things of value to be sold at a later date. For the collector, however, it’s rarely ever about the money. Learn more

Cabinet 10: The Curator's Collection Continued... The curator's collection continues in cabinet 10 where black and gold title blocking, silver stamping and recessed gilt medallions grace the covers of titles such as The poetical works of Henry Wadsworth Longfellow, The poetical works of Jean Ingelow: including the shepherd lady and other poems and Frederick B. Meyer's Moses: the servant of God. Learn more