Student raggers and radicals: Student activity and activism from 1880 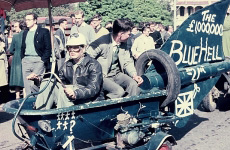 Ragging, according to the Oxford English Dictionary, is “an extensive display of noisy disorderly conduct, carried on in defiance of authority or discipline."

From medieval times, British university students have enjoyed a long tradition of drinking wine in celebration and boundless merrymaking. In early 19th century Cambridge a young Lord Byron took this raucous behaviour to new extremes with eternal partying, drinking and gambling. Legend tells that when forbidden a pet dog, he sidestepped University rules by keeping a tame bear instead.

In the later 19th century, the elegant surface of Cambridge masked a culture of heavy drinking and debauchery. Student rebellion emerged in 1897 when male students hung an effigy of a female cyclist in protest against the proposal to grant ‘new women’ full degrees. Riots followed, and it was not until 1948 that women were finally awarded full degrees.

The University of Adelaide was founded in 1874 on the Oxbridge tutorial model, and our students happily embraced the tradition of raucous high spirits and ragging, nearly always characterised by a joyful sense of humour.

Rowdy student entertainments became a traditional part of commemoration or graduation ceremonies. The 1896 Commemoration ceremony held in the early Library in the Mitchell Building, was continually interrupted by alarm clocks hidden behind the books. Later Elder Hall commemorations featured student entertainments held before the official ceremonies which were often interrupted by satirical songs about the officials and the graduates. The ceremonies were also interrupted by pranks. The 1902 ceremony was punctuated by tin whistles, accordions and hair-raising shrieks, the singing of songs, electric bells and the lowering of a skeleton in a black apron. 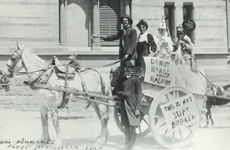 The student antics were alternately condemned and celebrated by the press, the SA Register reporting in 1899: “Varsity students are always enthusiastic …. Youth must have its mug, and it is no use trying to suppress hearty, happy undergraduates.”

While the interruptions were usually accepted in the spirit of exuberant good humour, by 1905 the Council moved to restrain larrikin behaviour by demanding prior approval of the student programme, and the student community decided to organise their own independent processions and concerts. 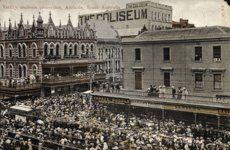 Public processions were held from 1905, in which satirical tableaus on trolleys and carts witnessed by large crowds progressed through the streets of Adelaide, followed by concerts featuring topical songs, academic caricatures, variety acts and farces. The 1910 procession offended some sensibilities with the Crippen float depicting the dissection of a corpse, while the crowds were entertained by burlesque costumes and mixed bathing in a tub while being showered with water by the University fire brigade.

Processions and concerts were abandoned during the First World War, but resumed in the 1920s. Correspondents to the Advertiser and Register complained about the tone of the processions in 1921 and 1922, apparently with some effect, for the 1926 procession appeared to have been dropped.

The 1936 procession aroused renewed criticism ("a disgraceful atrocity") and they were again abandoned, in spite of calls for their return in 1940. The end of the Second World War in Europe was marked by a spontaneous Varsity Victory March, held amid general good humour, and from 1947-49 the annual Procession, then known as Procesh, was revived.

The 1950 procession, however, again offended many and in 1951 the Registrar advised the SRC that "no display will be tolerated which is likely to bring the University into disrepute in the eyes of any section of the public." Although some students protested, others agreed that the previous year's display was "adolescent, puerile and filthy" and the procession was cancelled until its revival in 1952. Collections for charities were introduced as part of the Procession in 1952 in an attempt to legitimise the disruption caused on the city streets. 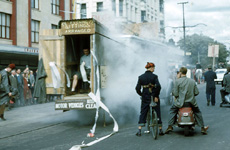 In the 1950s and 60s crowds of thousands would turn out to watch the lunch hour Procession Day marches of 30 or more floats, typically of a political bent. The floats, along with the Prosh rag published from 1954, often veered into questionable taste of giant phalluses and sexual innuendo, while exuberant student rowdiness approached larrikinism with smoke bombs, theft of road signs, and vandalising of street lights.

Some of the more memorable Prosh stunts included the placing of female dummies on the Elder Hall spire, hoisting a Jolly Roger at half-mast above Bonython Hall and the kidnapping of TV personality Ernie Sigley by SCIIAES (Society for the Confining of Immoral Impulses Among Engineering Students.)

Legendary among Prosh tales was the suspension of a FJ Holden underneath the University Footbridge by Engineering students in 1973. More recently construction workers were warned by anonymous tip-off that students dressed as policemen would be arriving to disrupt their work, while the police were similarly tipped off that students dressed as construction workers were illegally conducting themselves. A confrontation ensued where both parties were convinced that the other was not legitimate. Students stood by and smugly watched the ensuing confrontation.

Funds collected by students and money raised through the sale of the Prosh rag were donated to charity, at first often politically aligned such as the Campaign against Nuclear Energy. In 1986 a General Student Meeting narrowly voted for proceeds to go towards the Heart Foundation and this trend to non-political charities has continued. In 2005 the ransom demanded from the ABC for the release of Peter Goers went to Oxfam's Save the Children fund.

“Throughout its history, Prosh has trodden the fine line between philanthropy and downright extortion. It is similarly liable to public nuisance, piracy and defamation. And yet, despite, or perhaps because of, the litigation and public outcry, it remains a cherished part of University of Adelaide history, which has unfortunately lost its shine among students in recent years.” (Charity by Anarchy / M.Robin) 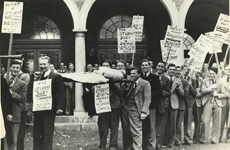 In the 1930s student concerns were focussed on internal issues, such as the quality of refectory food and facilities, compulsory Union fees, criticism of the lecture system and the limitations of library services.

The 1940s student was concerned with Union organisation (specifically refectory food and prices) and compulsory union and sports association fees. Political controversy surrounded Elliott Johnston, then President of the Students' Union, for his support of workers' strikes which were seen as contrary to the national war effort. This led to On Dit ceasing publication from 1941 until 1944. In 1950 the majority of students supported the banning of the Communist Party.

In the mid-1950s and 1960s, students again focussed on international issues - speaking against racial segregation in America, apartheid and the White Australia policy.

The late 1960s and early 1970s saw a rise in radicalism amongst the world-wide student population, and Adelaide campaigns were mounted against the Vietnam War, racism and apartheid, the treatment of Aboriginals, capital punishment, nuclear warfare, and university administration and education.

An increase in student activism in Australia was activated through the introduction of selective conscription in 1964 and Australia’s entry into the Vietnam War in 1965 – accelerated by the defeat of the Labor Party in the 1966 Federal election. It was argued that more extreme political action was needed to bring about change, resulting in larger and more militant protests and demonstrations.

The Committee for Vietnam Protest (CVP) was formed at the University in 1966 by four history and politics students. The informal group attracted large numbers at its first general meeting but proved largely ineffectual. In 1967 the more enduring group, the Campaign for Peace in Vietnam (CPV) was founded with an executive mostly comprised of University of Adelaide staff and students.

In 1968 the more radical Marxist group, the Students for Democratic Action (SDA), was formed at the University of Adelaide to protest against the SA gerrymander and the majority election loss of the State Labor Party, and to push for major societal change. Further campaigns protested against the undemocratic nature of University administration and courses, spreading their message through their newsletter “Grass Roots.” The allied Napier Liberation Front sought to similarly liberate the Arts Faculty.

An alternative group eschewed protest and theorising and formed ‘Social Action’ to actively bring about change by helping and educating deprived people in order to hasten the development of a more egalitarian society. Abschol, originally set up by the National Union of Australian University Students to support scholarships for Aboriginal university students, encouraged Aboriginal tertiary education and became a political pressure group concerned with land rights and other indigenous issues. 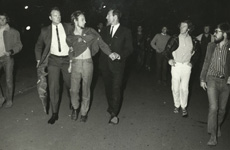 In 1969 demonstrations against conscription and the Vietnam War involvement led to violent clashes between police and demonstrators, culminating in the violence of the September moratorium which led to a Royal Commission.

In the 1970s a shift towards personal politics saw the development of Women’s and Gay Liberation groups, while the SDA morphed into the Adelaide Revolutionary Marxists and the Worker Student Alliance.

Student radicalism declined after 1972 with the withdrawal of troops from Vietnam, the election of Federal and State Labor governments, and the introduction of greater student participation in University administration.

A public image of radical students as long-haired, drug addicted, promiscuous, pseudo-intellectual ratbags with hippie clothing and suspect personal hygiene has been countered in Ann Draper’s thesis which found that many Adelaide activists were academically successful and morally concerned students who graduated to become useful and skilled members of society.

Others factors said to have contributed to the rise of radicalism in the period include an increased middle class population of students supported by Commonwealth Scholarships, a system of end of year exams which left time for debate and ancillary activities, and the rise in student unionism.

Students have continued to protest and demonstrate on University and political issues, but action never again reached the intensity of the late 60s to 70s.

The Liberal government at one stage banned the compulsory student services fee in the belief that it supported left-wing political activity. A downturn in student activism has alternatively been attributed to the end of free University education and the rise in the number of part-time students with work commitments, a more diverse student body (including mature age and international students) and a system based on continual assessment. Student unions are also more focussed on supporting students rather than political causes. Social media has also become the preferred media for political dissent and discussion.