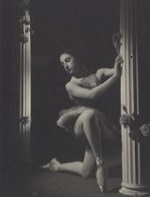 Born in Sydney as Margaret Abbie, Meg Denton learnt ballet from a young age. In 1945 she moved with her family to Adelaide where she initially took classes with Nora Stewart and went on to train with Dorothy Slane. She danced with the South Australian Ballet Theatre before pursuing full time training with Audrey De Vos in London. There she performed in various theatrical productions and was introduced to the study of Laban notation by Ann Hutchinson and Harry Haythorne.

In 1957 Denton was encouraged by Hutchinson to apply for a position at the Dance Notation Bureau in New York. She spent six months working at the Bureau, during which time she was involved in the notation of George Balanchine's Agon. While in the United States she also spent time at Jacob's Pillow and took classes with Antony Tudor at the Metropolitan Opera Ballet.

Returning to Australia by 1959, Denton joined Ballet Guild, dancing in the corps as well as teaching notation to students of Laurel Martyn. She also danced in stage and television shows at this time, and notated Paul Grinwis' ballet The Eternal Lovers.

Denton maintained her interest and involvement in dance while pursuing a professional career as a physiotherapist. She was appointed dance representative for the Performing Arts Collection, Adelaide, in 1983. In 1986 she was a key participant in the Australian Choreographic Project, which remounted significant dance works, including Laurel Martyn's En Saga and Dorothy Stevenson's Sea Legend, with students from the University of Adelaide Dance Department. The Project also resulted in notated scores for Rex Reid's The Night is a Sorceress and Cecil Bates' Requiem, and in Denton's production of videotaped interviews with several dancers, choreographers and composers. Continuing her work with dance notation, Denton created the Labanotation score for Beth Dean's Corroboree while Dean was teaching the ballet to students of the Australian Ballet School in 1994. She then revised this notation with Ray Cook between 1997 and 1998.

Denton was a foundation committee member of the Friends of the Australian Ballet in 1993, and a member of the advisory board of Brolga from 1994, when it began publication, until 2007. She was awarded a Bachelor of Arts (Hons) for her thesis on Professional Theatre in Adelaide, and a Master of Arts, published in 1993, for her biography of Adelaide teacher and choreographer Joanna Priest. This biography was written at the request of Priest, for whom Denton had taught in the 1960s, and was supervised by Alan Brissenden.

Biography supplied by the National Library of Australia.

These papers were donated to the Library in 2009-10 by Virginia Hunt, Denton’s executor