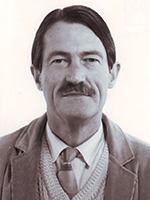 Harry Medlin was born at Orroroo in country South Australia on 2 January 1920. He attended school in Adelaide and studied at the South Australian School of Mines and Industries from 1936 to 1939, while working at the Adelaide Electric Supply Company.

He enlisted in the Australian Army in 1938, was commissioned in 1939 and rose to the rank of captain at the age of 20. He was a prisoner of war of the Japanese in Timor and Java from 23 February 1942 to 23 September 1945, and was awarded the Efficiency Medal as well as five campaign stars and medals.

On leaving the Army in 1946, he commenced studies at the University of Adelaide under the Commonwealth Reconstruction Training Scheme. He graduated Bachelor of Science in 1949, took Honours in 1951, and completed his PhD on X-ray crystallography in 1956. He was appointed a Lecturer in Physics at the University in 1951, gaining promotion to Senior Lecturer in 1960 and Associate Professor in 1974. He retired in 1985, but remained a strong and lively presence in the University community, especially the Alumni Association, which he helped found, becoming the Inaugural Chair.

He was Deputy Chancellor of the University from 1978 to 1997, and was awarded the degree of Doctor of the University in 1987, and the Centenary Medal for his creative and productive involvement in all aspects of the work, life and culture of universities in 2001.

He was especially active in the alumni affairs of the University in South East Asia, where he maintained many lifelong friendships, and travelled widely to develop contacts with graduates and establish alumni chapters.

Primarily original and photocopied news cuttings, mostly from The Advertiser or The Australia, on tertiary matters, including cuts to funding, women in University, education policies, plus Medlin’s letter to the editor, The Advertiser, 30 Jul 1982, on promoting access to tertiary education for the disabled, etc…

Original and photocopied new cuttings from a variety of newspapers on tertiary matters generally, on support for female students in non-traditional courses, on liberal principles in modern education, on academics’ salaries, plus an article ‘No juntas for this revolutionary’, on Medlin and his push to establish an executive committee at the University in order to streamline policy-making (The Australian, 21 Nov 1984), etc…

Original and photocopied news cuttings from a variety of newspapers on the increasing cost of education generally, on Anzac Day services, on Adelaide University’s Centenary of the First Woman Graduate, on Prime Minister Hawke’s about-face re the re-introduction of tertiary fees, plus a couple of articles on Douglas Mawson and Antarctic research, etc…

Primarily original news articles and some cuttings from various Adelaide University publications.  Items relate to the launch of the Alumni Association, to tertiary fees, to the celebration of the Golden Jubilee of the Bonython Hall, on the handing over of Martindale Hall by the University to the State of SA, on the appointment of Kevin Majoribanks as Vice Chancellor, plus other appointments, etc…

Background information on the Theatre, including: “Theatre 62 Regional Theatre Co. Inc. Constitution”, outlining its objectives, income, membership, management, etc; “General principles of new constitution”; copy of the “Act to establish the South Australian Theatre Company…”; facsimile of Christopher Sidney Winzar’s application for the incorporation of Theatre 62”, 23 January 1972; Steve Condous’ (Chairman, Theatre 62) invitation to Medlin to join the Theatre’s board, 17 April, 1973; various letters between Condous and Premier Don Dunstan, 1973-4; Medlin’s letter of complaint about the conduct of affairs at the Theatre, 10 September 1973; artistic policies, 1974-76; “On Cue: Theatre 62”, first issue of the Company’s magazine, no. 1 July 1974; “Outline of the organizational and accounting structure proposed for Theatre 62…”, plus financial reports and summaries for 1974 and 1975, etc…

Agendas and meeting minutes for the Theatre, including annual general meetings and board meetings, 1973-74.

6.2 University of Adelaide Committee for the Performing Arts

Primarily correspondence concerning issues being discussed by the Committee for the Performing Arts.  Includes handwritten from Mark Pearson to Medlin inviting the latter to become Patron of the Adelaide University Drama Society, undated; correspondence related to the reconstruction and expansion of the Union Building and the accommodation required for the Dept. of Music and the new drama course to be offered in 1976; “Report of Special Committee of the Place of Theatre in the University and related documents, such as “The Case for a Full-time Manager of the Union Hall”; various memoranda and proposals related to staffing and funding, including requests for teaching grants and a lecturer in drama, 1973-74; proposed course outline for Drama I, 1975; etc.

Primarily agendas and meeting minutes of the Committee, arranged chronologically from 20 February 1973 to 30 November 1973.  Includes documentation concerning issues raised at the meetings, such as: a draft proposal for a postgraduate Diploma in Theatre Arts; requests to the Allocation Committee for a full-time Union Hall Manager; “Elder Conservatorium Feasibility Study: First interim report”; recommendations for appointment of a Lecturer in Drama; etc.

Agendas and meeting minutes continued, arranged chronologically from 1 April 1974 to 26 October 1976.  Includes documentation re the lectureship in performing arts; “Options for Drama I”, outlining subjects students can take, such as ‘Stage Craft’, ‘Décor and Costume’, Acting/Improvisation’, etc.; “Drama I: Progress report and proposals”; “Report to the Council by the Committee for the Performing Arts on its own future membership”; etc.

“Report of The Arts Enquiry Committee for South Australia”, 1961, 136p. The report examines the condition of the arts in the State at the time, with Adelaide University providing the initial meeting place for discussions between local artists and members of the Contemporary Arts Society.  At the second meeting a committee was appointed to enquire into the place of liberal arts in the community life of South Australia.

Papers related to Medlin’s application to the Veteran’s Review Board for review of a Repatriation Commission decision dated 10 August 1988. Includes:

The following scrapbooks and tape recordings were received from University Archives in 2020.  See also Series 4 for other scrapbooks containing news articles and cuttings.

A small number of books and journals were also received with Medlin’s manuscripts.  These have been catalogued separately for the Rare Books Collection and are discoverable via the Library catalogue.  Items include “Barbed Wire and Bamboo” (journal of the Ex-prisoners of War Association of Australia), “Never meant to be heroes: The story of Sparrow Force…” by Maj. Neville Noakes, plus several military engineering manuals.

Additional Harry Medlin papers were transferred to University of Adelaide Archives in 2016. Contact the Archives for access to his official/administrative papers.