Professor Donald Cheek (MBBS 1947, MD 1953) was educated at Prince Alfred College and the University of Adelaide, where he was awarded the Eric Smith Scholarship. From the time of his graduation he embarked on a life of research, initially under the direction of Professor Sir Stanton Hicks in the University of Adelaide Physiology Department, where he established a link between Pink Disease (Infantile Acrodynia) and salt deficiency. In 1958 he described pseudohypoaldosteronism, a hitherto unrecognised salt wasting syndrome in infancy, which overseas workers referred to as Cheek's disease.

After research appointments in USA at Yale and the University of Cincinnati, interspersed with a post at The Hospital for Sick Children in Toronto and a research fellowship at the Royal Children's Hospital in Melbourne, he was appointed Assistant Professor at the University of Texas, then from 1962 spent a decade at Johns Hopkins Hospital, Baltimore, becoming Professor and Head of the Division of Growth Research.

He resumed work in Australia as Research Professor of Paediatrics at the University of Melbourne and first Director of the Royal Children's Hospital Research Foundation from 1973-1979. From 1980-1988 he was Visiting Professor, Department of Obstetrics and Gynaecology of the University of Adelaide, researching hydration and tissue growth in newborn infants and pregnant women.

In a lifetime of research into the growth and development of children he wrote two books and more than 200 papers. He was described by American colleagues as a 'pioneer of children's body composition and growth investigations', and was the only non-American to win the coveted Borden Award, America's highest award for paediatric research.

In October 1989 Professor Cheek presented his books and research papers to the University of Adelaide.

2. Curriculum Vitae and Correspondence, 1967-1989. 20 items.
[Principally letters of congratulation and recognition, and items of correspondence with former Pink Disease patients.]

5. Papers reflecting on the significance of early research by Cheek on Pink Disease (acrodynia), identification of renal salt-wasting syndrome, and work on human body composition in relation to disease.  1982, 1986.  3 items. 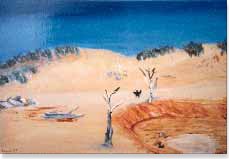 6. Colour prints of paintings by Donald Cheek, together with a catalogue of Cheek's paintings (undated, with original prices and the names of some purchasers), letter from Frank W. Horner Limited concerning an award to Cheek for work exhibited at the Alumni Association Art and Photographic Exhibition, 1959, invitations to exhibitions of Cheek's work at Portobello House, 1979 and at the Adelaide Art Exchange, 1986, and article in The Advertiser, [August] 1986 on Cheek's exhibition.  42 items, including 38 prints.