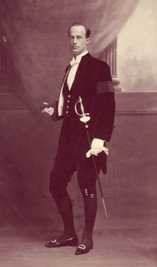 Douglas Mawson was born in Yorkshire in 1882 and emigrated at an early age to Australia. He studied mining engineering at the University of Sydney, graduating in 1901. As a student of Professor T.W. Edgeworth David, Mawson displayed high forensic capability in the field and a meticulous scholarly talent, graduating in science, with geology as a major subject, in 1905.

This led to his appointment as Lecturer in Mineralogy and Petrology at the University of Adelaide (1905-1920) and then Professor of Geology and Mineralogy (1921-52). He quickly gained a reputation as an outstanding teacher as well as that of a fine scientist and man of action.

In 1907 Mawson's interest in glaciation led to him accepting an invitation to join the British Antarctic Expedition, led by Ernest Shackleton, as physicist. Along with Professor Edgeworth David and Dr A.F. Mackay, Mawson made the first ascent of Mt Erebus (11,400 feet) on Ross Island and later the same companions, after a sledge journey of 520 miles westwards from the Ross Sea, reached the South Magnetic Pole in King George V Land.

Mawson organised and subsequently led the Australasian Antarctic Expedition of 1911-14 and the British, Australian and New Zealand Antarctic Research Expedition 1929-31 (BANZARE),which ultimately led to the annexation of the Australian section of Antarctica.

The intellect and courage displayed during his Antarctic expeditions ensured him a place amongst the world's greatest explorers. His name is commemorated by the Mawson base in Antarctica, the Mawson Laboratories of the University of Adelaide and the Mawson Lecture of the Australian Academy of Science.

The papers of, and collected by, Professor Sir Douglas Mawson relate to his work on South Australian geology, particularly on the pre-Cambrian rocks of South Australia and the sub-division of the Adelaide System. They include draft papers, notes, extracts from sources, correspondence and publications, as well as some papers of Walter Howchin on the geological position of the South Australian glacial beds. 1887-1956. 80cm.

The papers were found in the office of Dr Brian Daily after his death in March 1986 and were transferred to the University Archives in September 1986.

The additional papers in Series 13 were transferred by Miss Maud McBriar, Department of Geology and Geophysics, in December 1987. Files transferred from the Papers of Martin Glaessner were also added in 2012 as Series 15.

Series 1.  Papers of W. Howchin relating to glaciation, including controversy with H. Basedow and J.D. lliffe over the geological position of the S.A. Cambrian glacial beds. Notes, correspondence, cuttings, ms. and published papers by Howchin and others. 1905-1937. 6cm. The papers were apparently collected together by Mawson and contain some later notes and reprints of Mawson. Also water bores notebook.

1.1 Correspondence, notes, ms. of formal Note by Howchin disputing the contention of Herbert Basedow and J.D. Iliffe relating to the tectonic nature of  glacial beds in South Australia. Includes copy of the Basedow/Iliffe paper, a  translation, and correspondence and notes of Fritz Noetling, University of  Tasmania, disputing Basedow's comments on Tasmanian glacial beds.  Nov.1909 - Oct.1911.  1cm.

1.3 'Glacial beds of Cambrian age in South Australia' - abstract of paper by Howchin published in 1908. lcm.

1.5 'Note on the Geological Age of the Sturtian Tillite in South Australia', 1927 - extract from letter from Professor J.W. Gregory, University of Glasgow, read by Howchin at the Royal Society of S.A. meeting 11 August 1927. 1cm.

1.6 Notes, draft paper/lecture on The Ice Age in Australia/Australia under ice. n.d. 2cm.

1.7 Notes, extracts from publications on Glaciations, also published paper by Curt Teichert on 'A Tillite occurrence on the Canadian shield' (1937) and translation of a paper by Emile Chaix on 'Erosion Torrentielle Post Glaciare in some valleys'. n.d.  Extracts are in Howchin's hand: the later notes are in Mawson's, and the 1937 Teichert paper is addressed to Mawson. 1892, 1908-14, 1937 and undated. 2cm.

1.9 "Bores for water. Book no. 2" Bore log of wells drilled for water in Adelaide city and suburbs, and in SA country 1905-36. Some newspaper clippings inserted. (Transferred from Dept of Geology 2014)

1.10. Reprint ‘The Geological Distribution of Fossiliferous Rocks of Cambrian Age in South Australia with Geological Notes and References’ / Walter Howchin (1925), with a ms note by Howchin on ‘Beltana and Ajax Mine. Accompanied by Mess Mawson and J.G. Taylor, Feb. 1906’, with sketch. (Transferred from the Mawson Collection, South Australian Museum, 2016)

Series 2.  Newspaper cuttings of articles and letter to newspapers by Howchin, dealing with religion and geology. 1887-1906.  2cm.

Series 3.  Papers of and collected by Sir Douglas Mawson relating to his work on the sub-division of the Adelaide (Cambrian) system - notes, extracts, draft and typescript papers, and related correspondence. 1897, 1906-50. 5cm.
[Given box title: South Australian Cambrian - General] 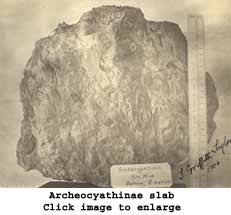 Also original pencil scketches for article by R. Etheridge On some species of the family Archaeocyathinae, published in Transactions of the Royal Society of South Australia, volume 13 (1889-90). Annotated by Ralph Tate?
[see also 3.3 below]

3.3 Typescript of 'Adelaide Series' paper by Mawson, with related notes and correspondence with F.W. Whitehouse, University of Queensland re the cambrian strata in Queensland, Cambrian tribolites, the mapping work of Segnit, and Whitehouse's collection of Ajax archaeocyathinae. 1934, 1936, 1939.

3.4 Typescript drafts of paper by Mawson and R. Sprigg on 'The Subdivision of the Adelaide system', with related correspondence and notes. 1950.

3.5 Letters of G.F. Matthews, Aug. 1897 [to Howchin?] re "the stratigraphical value of archaeocyathus etc."; T.W. Edgeworth David, Aug. 1922 to Howchin, with reference to T. Chapman's indication of foraminifera in Flinders Ranges limestone; T. Chapman 1923, 1935 and T.W. Dalwood 1939 on results of rock analyses for presence of foraminifera.

5.6. Reprint “The Cainzoic Succession of Maslin and Aldinga Bays, South Australia” / M. A. Reynolds (1953) gifted to Mawson, with ms account by Mawson of the investigations into the Maslin sediment beds by Howchin and Frederick Chapman and later assessment by Walter J. Parr [ca 1950], and the letter from Chapman to Mawson 26/11/1932 detailing his assessment of the samples from Blanche Point, Aldinga.

Series 6.  Papers relating to research and publication by Mawson on Pre-Ordovician Rocks of the McDonnell Ranges, including field notes, draft and final papers, correspondence with colleagues and others involved in field work, and copies of relevant publications by others. The papers pertain to research for the original (1930) publication by Mawson and Cecil Madigan and to a subsequent (1952) research visit to the area by Paul Hossfeld and Mawson's claim to early identification of a glacio-fluvial conglomerate in the Ranges. c.1927-1956, with some earlier reprints. 8cm.
[No given title]

6.1 Notes and field notes and paper by Mawson. Ms. notes and draft and printed paper on Pre-Ordovician Rocks of the McDonnell Ranges, written by Mawson en route to London in 1927 (publ. 1930 as joint Mawson-Madigan paper).
Notes on visit to Alice Springs, Nov. 1952.

* Copy sent by authors to Madigan.

Series 7.  Papers relating to publications by Sir Douglas Mawson on the Proterozoic Sequence. 1934-39 and undated. 5cm.
[Given title "Original ms. of publications on Proterozoic sequence''].

7.4 "Nepabuna and Italowie". Ms. notes and typescript papers, printers proof and plates, of The most northerly occurrence of fossiliferous Cambrian strata yet recorded in South Australia; and The Cambrian succession - Italowie Gorge (read Oct. 1937).

Series 8.  Collection of reports (ms. and printed), notes and papers by Howchin, Mawson and others on Kangaroo island and Yorke Peninsula, with related correspondence, newspaper articles and maps. 1898-1937 and undated. 4cm.
[Given box title: The Gulf Islands - Yorke Peninsula - Kangaroo Island]

8.3 Notes by Mawson on a visit to Edinburgh in 1906; extensive notes re Saline Lakes of Yorke Peninsula and Ice in South Australia, c.1907, and ms. of paper read in 1907 on "Evidence suggestive of a Late Mesozoic or Early Tertiary age for a widespread glaciation in South Australia', with drafts and background notes.

8.4 Report by Mawson on 'Prospects of the occurrence of mineral oil in portions of the Hd. of Haines, Kangaroo Island', 1910.

8.6 Letters of Ralph Williams to Mawson, Aug. 1915 re rock analyses and J.D. Somerville to H.M. Hale (Director, S.A. Museum) re a reference to petrified trees on Thistle Island, Feb. 1937.

Series 10. Typescript summaries of the geology of various countries and of the Australian states, together with ms. notebook of P. Darragh "4th year stratigraphy notes" on which some of the typed summaries are based. 3cm. n.d.
[Given box title: Stratigraphical Summaries]

Series 11. Annual and other reports of the Government Geologist, H.Y.L. Brown, collected by Sir Douglas Mawson, 1883-1910, with a single report by L.C.E. Gee on the Tanami Goldfield, 1911. 6cm. Partial list held with the reports.
[Given box title: S.A. Mines Dept. - Brown's reports]

Series 13. Notes and papers on the Geology of the Encounter Bay area.1921-35 and undated.

13.6 Geological and Botanical Notes on the Victor Harbor district, by J.B.Cleland and Walter Howchin. 1931. 1 item (printed).

23 maps related to Mawson, Madigan, Chewings and other Geology Dept. activities and publications. Includes map of the 1902 SA earthquake, maps and diagrams relating to Mawson/Madigan published articles on the McDonnell Ranges, and other geological and mineralogical maps.

Also set of 20 maps, section diagrams etc relating to Madigan's expeditions to Central Australia and the Simpson Desert, and his work on sandridge deserts. Some maps show routes and camp locations.

Maps, plans and sections re Mawson’s publications on The Geology of the Broken Hill District ca 1912. IN GEOLOGY DEPT MAP CABINET

Series 15. Files transfered from the papers of Martin Glaessner

These files were transferred to the Library from the the Dept of Geology and Geophysics to the Library in 2000 as part of the Martin Glaessner Papers (MSS 0088) and were relocated to the Mawson Papers in 2012.

15.1 [Mawson's algae file] Includes photographs of algal specimens, articles, notes on specimens from published reports; typescript extracts from 'Algae reefs and oolites of the Green River formation' by W.H. Bradley; letter from Mawson to G. Tandy of the British Museum 7/3/1940 re calcareous alal specimens from the SE of South Australia; ms draft of article 'The genus Collenia and its geological importance; letter from F. Chapman of  National Museum Melbourne 16/8/1926; ms notes on 'China algae chiefly in Grabau' and 'Algal chiefly Walcott ancient types'; letter from C.D. Walcott of the Smithsonian Institute 26/5/1926 comparing specimens; letter from F. Chapman 5/9/1934 re fossil leaf specimens; 1931 correspondence between Mawson, W.G. Woolnough of Dept of Home Affairs and Lon Cartwright of Superior Oil Co. of California re algal limestone deposits in Australia and Texas; 1938 letters to B.M.H. Tripp in London re copies of reprints; letter 19/1/1939 from A.K. Denmead of Queensland Geological Survey to C.T. Madigan re identification of algal limestone specimens; correspondence 1940 with L.H. Minchin of Meningie arranging visits to the Coonalpyn area and interest in quarrying porphyry rocks near Keith; correspondence 1939 with Fred Chapman re igneous rocks associated with the calcarous algae of the Proterozoic age; letter 17/9/1938 with C.L. Fenton; correspondence 1929 and 1931 with Andrew Young re possible reappearance in Antarctica of Table Mountain sand stone formation (Young's letter was addressed to Mawson on 'The Discovery at Capetown docks); orders for books and fossil collections; letter to Mawson from L. Baas Becking 27/6/1938; correspondence 1949, 1951 with Olaf H. Selling of Stockholm re calcareous algae specimens.

15.2 [Correspondence re Flinders Ranges algal limestone forms]  Includes: carbon/typescript copies of letters from Douglas Mawson at Cape Town 17/10/1929 [en route to Antarctica] to Professor Garwood of University College London; correspondence with David White of Washington 1933-34 describing the history of collecting specimens and the delay in writing up fieldwork due to Mawson's two trips to Antarctica; typescript 'Exhibit of fossil algae from the Flinders Ranges' with 'Royal Soc. South Australia, Sept. 12 1929' added in ms and notes written on envelope; and correspondence 1930-31 to Prof. A. Bigot of University of Caen, France.

15.3 Correspondence from G.S. Platten of the Methodist Mission, Rabaul, PNG, to Professors Howchin and Mawson 1937-38 re limestone rock formations in New Britain. Includes photographs and sketches, and descriptions of rock and fossil specimens sent to Mawson for examination, and article 'Geological report: Subsidence near Ramasaka village south-east Baining' / N.H. Fisher. Rabaul Times Oct. 8, 1937. (With cover note 'From the late Sir Douglas Mawson's files. Removed 25th May 1959. M.F. Glaessner')
Mawson continued the correspondence when Howchin died in 1937 at the age of 93