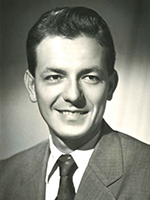 Jiří Tancibudek was born in Czechoslovakia in 1921. He graduated from the Prague Conservatoire and Academy of Music and rose to become principal oboist of both the Czech Chamber Orchestra and the Czech Philharmonic Orchestra under Rafael Kubelik, a position he held for five years. Tancibudek’s senior position protected him under the Communist regime during World War II, but the position of his wife, Vera Hašková, was more precarious and they fled to Bavaria, enduring a desperate night-time trek across the mountains carrying little more than his oboe.

They lived in a displaced persons' camp in West Germany and hoped to immigrate to Canada, but there proved to be little work for oboists. In 1950, on the recommendation of Sir John Barbirolli he was invited by Sir Eugene Goossens to teach oboe at the Sydney Conservatorium in New South Wales. Vera was offered a teaching position at Frensham School and the couple lived on the campus. In December 1950 he gave Australia’s first full evening oboe recital at the Conservatorium. He later became principal oboist of the Melbourne Symphony Orchestra. From 1964 he was a member of the Music Dept of the University of Adelaide teaching oboe at the Elder Conservatorium.

As an ABC celebrity artist, he appeared frequently as a concerto soloist and recitalist in all capital and major cities of Australia and New Zealand. In 1956 Tancibudek gave the world premiere of the oboe concerto by Bohuslav Martinů with the Sydney Symphony Orchestra under Schmidt-Isserstedt. This work was specially written and dedicated to the soloist by the composer. He also played the British premiere on the Third Program of the BBC in London in 1958 and the European premiere in Hamburg and Vienna.

In 1957 he was awarded a travel grant by the Carnegie Corporation of New York to visit the USA and Canada. In 1964, during his second world tour, he played as soloist and recitalist in Canada, USA, Ireland, Germany and Finland.

As a member of the University of Adelaide Wind Quintet, he undertook three international tours in 1969, 1972 and 1973 that included America, Canada, England, Europe, Israel, India and the Far East. It was the first Australian chamber group to tour internationally. The 1969 tour marked his first return to Czechoslovakia, however his name was generally suppressed until 1989, when he was invited by President Vaclav Havel to give concerts and master classes and to be a jury member of the Prague Spring International Music Festival. He also visited Japan in 1991 and 1995 as a jury member of Tokyo International Oboe Competition.

Tancibudek performed with some of the most distinguished artists and conductors in the world including Walter Susskind, Josef Krips, Sir Eugene Goossens, Sir John Barbirolli and Yehudi Menuhin. Many composers have written and dedicated works to him including Martinů and Feld as well as Australian composers Margaret Sutherland, Dorian le Gallienne, Miriam Hyde and Franz Holford.

In 1989, Tancibudek was appointed a Member of the Order of Australia (AM). He died on 1 May 2004 while flying to attend the wedding of his granddaughter Sarah in Vienna. A memorial concert was held at Elder Hall on 15 August 2004, with many international musicians contributing their services free of charge to fund the Jiří Tancibudek Memorial Scholarship established by the Elder School of Music.

Vera Tancibudek died in June 2018. These papers, scores and recordings were donated to the University of Adelaide by Vera and her daughters, Sarah and Eve, between 2014 and 2018.

Series 3: Performance scores and programs  1.42 m
Scores played and arranged by Tancibudek, many in manuscript, including full and part scores of the Martinů oboe concerto; also recordings, including commercial CDs, CDs remastered and copied by Tancibudek of his performances and concerts of the Adelaide Wind Quintet and the University of Adelaide Chamber Orchestra; original master reel-to-reel tapes; programs, publicity, newspaper cuttings related to performances; notices of radio engagements, including pieces performed by Jiří Tancibudek on Süddeutscher Rundfunk, Stuttgart, 1950; ABC engagement forms and correspondence 1952-92.

Series 4: Bohuslav Martinů  3 cm
Copies of letters from Martinů to Tancibudek with translations by Vera Tancibudek; correspondence with Guy Porat re publication of the Martinů Concerto; other miscellaneous Martinů items.

Series 5: Writings/research  36 cm
Research materials and notes re a planned 1960s PhD on ‘The Oboe, historical, technical and critical considerations’ and later research on the aesthetical aspect of oboe performance; journal articles by Tancibudek; printed works on oboe method collected by Tancibudek.