Smoke haze from Australia’s catastrophic bushfires is continuing to affect many parts of the country.

Although there’s no safe level of air pollution, the health hazards tend to be greatest for vulnerable groups. Alongside people with pre-existing conditions, smoke exposure presents unique risks for pregnant women.

These conditions can have short-term and lifelong effects on a baby’s health, with increased risk of conditions including cerebral palsy and visual or hearing impairment. Even babies born only a few weeks early can experience learning difficulties and behavioural problems, and have an elevated risk of heart disease in later life.

So it’s especially important pregnant women protect themselves from exposure to bushfire smoke.

Read more: How does poor air quality from bushfire smoke affect our health?

Why are pregnant women at higher risk?

Pregnant women breathe at an increased rate, and their hearts need to work harder than those of non-pregnant people to transport oxygen to the fetus. This makes them particularly vulnerable to the effects of air pollution, including bushfire smoke.

We often measure poor air quality by the presence of ultra-fine particles called PM2.5 (small particles of less than 2.5 micrometres in size). These particles are concerning because they can penetrate into our lungs, and into blood and tissue to cause inflammation throughout the body.

Importantly in pregnant women, environmental pollutants can cause inflammatory damage to the placenta’s blood supply. This can interfere with the placenta’s development and function, which can in turn compromise the growth of the fetus.

What the evidence says

Many studies have linked poor air quality, particularly high PM2.5 levels, to poor pregnancy outcomes. Data from 183 countries showed in 2010, an estimated 2.7 million premature births, 18% of the total, were associated with PM2.5 pollution.

A 2019 study of more than 500,000 pregnant women from Colorado looked at the effect of bushfire smoke on pregnancy outcomes. The authors analysed data on air quality, fire incidence and pregnancy and birth records from 2007-2015, during which time Colorado was regularly affected by smoke from fires burning in California and the Pacific Northwest.

The study found PM2.5 due to bushfire smoke was linked to spikes in premature birth, especially in women exposed during the second trimester.

In women exposed to smoke during the ﬁrst trimester, birth weight was lower than average. Further, exposure during any trimester increased the chance of gestational diabetes and high blood pressure.

The effects were detectable even with low exposure to smoke and small increases in PM2.5. For every 1 microgram/m³ increase in average daily exposure to PM2.5 during the second trimester of pregnancy, the risk of premature birth increased by 13%.

Read more: Evacuating with a baby? Here's what to put in your emergency kit

In another large study, a 24% increase in premature birth was seen after 10 micrograms/m³ increase in PM2.5.

As well as PM2.5, bushfire smoke contains larger PM10 particles, nitric oxides, carbon monoxide and other gases and toxic chemicals. These all have potential to impair lung and heart function in the mother, activate inflammation, and directly affect fetal and placental development.

Air quality is also a factor for couples attempting to conceive or dealing with infertility.

Read more: How to monitor the bushfires raging across Australia

Precautions to take if you’re pregnant

The best strategy is to reduce smoke exposure as much as possible. Recommendations from NSW Health include staying inside on high-risk days, sealing the house to prevent smoke infiltration and using air conditioning to keep cool.

Avoid creating smoke by cigarette smoking, burning candles, or frying and grilling. Use PM2 (N95) masks and air-filtering devices if possible, and avoid exposure to ash, which contains particulate material you can inhale. 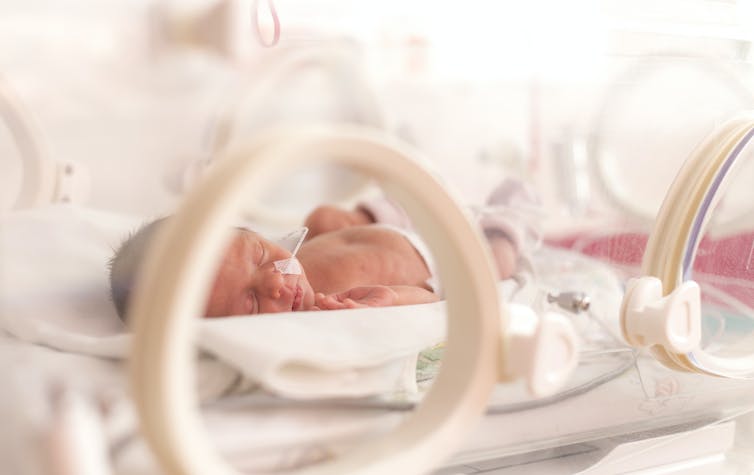 Studies have shown when women are exposed to bushfire smoke during pregnancy, the rates of premature birth increase. From shutterstock.com

Make sure your medication and prenatal vitamins are accessible, continue to take them, and stay well hydrated. Inform authorities and shelters you are pregnant and need to maintain your antenatal care.

Be aware of the signs of premature labour including abdominal cramps or contractions, a heavy vaginal discharge, loss of fluid or vaginal bleeding, pelvic pressure and low backache. Seek help if you think you may be going into labour.

Given what we know about the consequences of poor air quality on pregnancy outcomes, it’s critical pregnant women are given top priority when it comes to bushfire relief and health care support.

Read more: From face masks to air purifiers: what actually works to protect us from bushfire smoke?

Tagged in The Conversation, Health and biotech