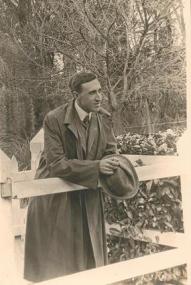 Born at Edinburgh in 1884, Robertson came to South Australia in 1892 when his father obtained a position with a mining company at Callington. He studied for a Bachelor of Science degree at the University of Adelaide from 1902 under Professor Edward Stirling, with an interest in physiology, graduating in 1905.

Robertson was then appointed assistant lecturer in physiology at the University of California, Berkeley. He earned a PhD from Berkeley in 1907 and then a Doctor of Science as a remote candidate from Adelaide in 1908 at just 24 years of age. He became a full Professor at Berkeley in 1917 and the following year was appointed Professor of Biochemistry at the University of Toronto. Following Stirling's retirement in 1919, he moved back to the University of Adelaide to become the first occupant of the Chair of Biochemistry and General Physiology. By this time, Robertson was not only Stirling's successor in physiology but also his son-in-law, having married Jane Winifred (Jeannie) Stirling in 1910.

Robertson had a great passion for biochemistry and is considered the first professor in Australia to embrace the field, establishing the discipline of Biochemistry in the University of Adelaide's Medical School. He was also a driving force behind the building and fitting out of the Darling Building in 1922 which housed the disciplines of Physiology, Biochemistry and Histology.

Robertson made a vital contribution to the manufacture of insulin for use by diabetics. In 1923, within one year of the published discovery of insulin by researchers at Toronto University, Robertson had manufactured the drug for the first time in Australia in the University of Adelaide's Darling Building. Robertson produced insulin more cheaply, quickly, and in greater volume than anywhere else in the world.

A pioneer of the physical chemistry of proteins, Robertson devoted much of his research to the problem of growth. His work into animals' growth resulted in a major contribution to agricultural science and industry in Australia. In 1927 he was approached by the Commonwealth Council for Scientific and Industrial Research to head a division of animal nutrition based at the University of Adelaide. He was working hard on his research at the Waite Campus when he caught influenza, then pneumonia. After several days in hospital, he died in January 1930.

The first collection of reprints and papers were presented to the University of Adelaide in November 1975 by Mrs E.L. Robertson and listed by Gavan McCarthy, Australian Science Archives Project, 15/5/1987. The article and research material on Tethelin and insulin were presented by Dr David Robertson and Dr John Tregenza in 1989, with additional reprints also added in 1989. The remainder were purchased from the Robertson family in 2011 with the Robertson Collection of books from the estate sale auction. The papers were relisted in 2013.

Collection of lectures, notebooks and other papers relating to Robertson's research, experiments, teaching and philosophy.

Robertson's reprints have been consolidated into a single collection catalogued for the University Collection at 504 R65.
These have been collated against the Bibliography of Robertson's publications compiled by Dr Mary C. Dawbarn and published in the Australian Journal of Experimental Biology and Medical Science v. 9 (1932) p. 7-21.