The intaglio process of aquatint engraving was a beautiful yet complicated and short-lived art.  With its tints of utmost delicacy or extreme depth, it was the only style of engraving that shared the softness and subtlety of a watercolour painting.  It was perfectly suited to topographical prints and to land- or seascapes where a broad range of tonal values was required.

The word ‘aquatint’ was, in itself, complicated.  As Baynton-Williams pointed out, ‘aqua’ was the shortened version of aquafortis, literally meaning strong water or acid; ‘tint’ referred to the tones of light and shade in the illustration and also implied varieties of colour.[1]  Herein, lay the problem.  All of the earliest aquatints, and many of the later ones, were actually printed in a single colour only, usually black or sepia. 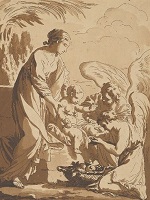 Equally ambiguous was the origin of aquatinting.  According to T. H. Fielding, it may have been invented by Frenchman Jean-Claude Richard de Saint-Non, who communicated the process to etcher and painter, Jean Baptiste Le Prince in the mid-1700s.[2]  Numerous attempts to produce the aquatint had certainly been made earlier, particularly by Jan van de Velde IV in Amsterdam, around 1650, but all of these 17th century efforts had failed.  It was not until 1768 that Le Prince discovered the benefits of granulated resin, taking out a patent for the process of laying an acid-resistant dust ground on the copperplate.  He published recipes for this technique in Découverte du procédé de graver au lavis in 1780 but failed to sell his secret during his lifetime.  Instead, it was purchased posthumously by the Académie royale de peinture et de sculpture in 1782, who then released it openly.[3]  Nonetheless, Le Prince’s sepia works, with their bold outlines and pen-and-wash appearance, certainly set the benchmark by which later artists were measured.

This ambiguity around origin also extended to Britain.  Watercolourist, Paul Sandby, has frequently been credited with introducing the process to England, and not surprisingly, given the artist promoted his own 1775 set of South Wales prints by stating aquatinting was “a mode of imitating drawings on copper plates discovered by P. Sandby, R.A.”.[4]  However, this was not entirely accurate.  As Baynton-Williams explained, Sandby was just the first to produce a series of aquatint prints; it was cartographer Peter Perez Burdett who first exhibited aquatints, completed between 1771 and 1773.[5]  Sandby’s efforts to make important topographical prints were tireless, though, and his constant experimentation with spirit ground, as opposed to Le Prince’s dust method, did much to promote British aquatinting.

Though colour illustrations born through other methods of printmaking, such as mezzotint and stipple, were already in use when aquatinting commenced (in 1768), it would be a further three decades before aquatints were colour-printed.  I799 saw the publication of James Malton’s A picturesque and descriptive view of the city of Dublin.  It contained a series of prints, mostly of public buildings, originally published between 1792 and 1799 which were executed in etching and aquatint by Malton himself.  Bound as a whole, they likely represented the first published colour aquatint book.  The prints, as was the case with most colour aquatints, appeared in only a few subtle shades – mostly blues, greens and browns, and would have probably had brighter colours, especially on clothing, applied by hand.[6] 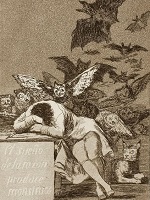 Of the 19th century aquatint artists to follow in Malton’s footsteps, Spanish painter Francisco José de Goya y Lucientes was arguably the most famous.  He produced four major sets of prints during his lifetime; the earliest of these, a series of 80 aquatinted etchings, was published in 1799.  Los Caprichos, though satirical, was also somewhat bleak, and the works may have reflected Goya’s ill health which, in 1792-3, had left him deaf.  The inspiration for one of the prints, The sleep of reason produces monsters, created during the Age of Enlightenment when artistic ideals, amongst others, were being questioned, reportedly came to Goya in one of his dreams.  Its creative freedom was, in many ways, representative of the entire set, each illustration exploring elements of human folly or the absence of reason.

Like most aquatint artists, Goya worked on his copperplates in a number of ways to achieve the desired effects.  Working with an etching needle and sometimes with a drypoint needle, he employed a combination of etching and aquatinting techniques to get the lines and shading just right.  In fact, the whole aquatinting process was quite laborious.  It required such a level of skill, that many artists handed the job of aquatint plate-making over to a professional engraver, only to be dissatisfied with the end result.

After Goya’s death in 1828, few artists persisted with the aquatint.  Though it was one of the most flexible and precise methods of creating tones, and produced some of the finest examples of colour illustration, it was time-consuming, even for the most talented of engravers.  Sadly short-lived, its commercial viability as a printing process all-but ceased with the arrival of lithography in the 1830s and today its use is generally limited to fine art.

At its simplest, aquatint engraving involved exposing a zinc or copper plate to acid through a layer of melted, granulated resin. The acid bit away the plate in the tiny spaces between the resin grains, leaving behind an evenly pitted surface which yielded broad areas of tone when the grains were removed and the illustration printed.

Much of the success of producing a beautiful aquatint lay in the preparation of the metal plate.  T. H. Fielding recommended “a long and vigorous oil rubbing”, followed by a wiping with turpentine, a dry cloth and finally a gentle breath of air, the latter leaving bright, shiny spots where grease or dirt remained.[7]  Where these appeared, the plate would need to go through the cleaning process again, for a poorly polished plate was certain to leave a smudgy grain.

The plate cleaned, the engraver next laid a ground on its surface.[8]  This was done in different ways.  Early artists used spirit resin, with a varnish-like consistency, which they poured evenly over the plate.  As the spirit evaporated, the remaining resin dried and crazed in minute particles, creating a speckled surface which gave the aquatint its characteristic look.  More recently, though, artists have preferred to lay a ground of dust instead, using a dust box.  Nowhere is this process better explained than in Smidgeon Press’ Printmaking 101: Applying Rosin for Aquatint (Using a Rosin Box).[9]  Here, the author explained how rosin, the purified sap of pine trees, was pulverised to a powder so fine that its maker needed take the utmost precaution not to inhale its dangerous particles.[10]  With the powder inside the rosin box, the printmaker then gently cranked the box handle, causing its paddle system to begin wafting an impossibly fine layer of dust.  A flap on the front of the box was opened, the plate slid onto an internal rack and the flap closed again.  Time was then allowed for the dust to settle on the plate before it was removed and taken over to the heating element.  Here, it was moved slowly above a flame until the rosin melted, turning from a white-yellow colour into tiny, clear acid-resistant droplets.  Once cooled, the plate was dipped into a bath of acid, the “bite” producing an even level of corrosion on its surface which, once inked, would produce that fine speckled appearance.

In theory, laying the ground was a simple process; in practice it was anything but.  There were various types of dust boxes.  Some were electric, others paddle-driven and fan-dispersed; whatever their design, they all required a high level of patience, dexterity and skill from the printmaker.  Transferring the plate into the dust box, for example, was almost as tricky as getting it out.  As H. L. Birdsong explains, the aim was to set the plate inside carefully but quickly, for dangerous particles of rosin would waft out of the box for as long as the door was open.[11]  Move too quickly, though, and the plate could slide off of its backing plate; shut the box door suddenly and clumps of rosin could fall onto the plate. The printmaker also had to take care not to leave their fingerprints on the plate since these would affect how the rosin melted onto its surface.  Knowing exactly how long to leave it in the box also came with experience; the dust coating might be too dense or too light, depending on how long the dust was left to settle.  If the coating was too heavy, the printmaker would need to clean the plate and start the process all over again.  Even the method of transferring the plate to the heating element was fraught with danger – tilt it too much, breathe on it or walk by a draft and all the rosin would move on the plate.[12]  The final hurdle, melting the rosin on the plate, also required a well-thought-out plan.  Using a preheated hotplate required a sound technique for laying it on and getting it off without burning oneself.  Alternatively, hovering it over a naked flame required steady and consistent movements.  Either way, copper was an excellent conductor, so the potential for burns was high.

Once the plate was prepared, the printmaker turned their attention toward creation of the aquatint itself.  Many etched an outline of the illustration on the plate at this stage, providing the basis and guide for the tonal work to follow.  Some may have already applied an acid-resistant “stop-out” or ground, known as asphaltum, before the plate was bitten with acid, if they had intended to keep areas of the final print totally white.  Either way, now was the time to ensure that areas of the plate where tone was not required, were painted with a barrier through which the acid could not penetrate.  Next, the plate was submerged into acid and “bitten”.  The longer the plate remained in the acid, the darker the resulting tone.  It was then removed, rinsed with water and inspected, the printmaker applying asphaltum a second time to areas where no further tonal variation was required, the stop-out preserving them at the current tone.  Then the plate would be submerged in acid again, biting deeper still and producing darker tones to those areas not stopped out, and the whole process of acid biting and stopping out repeated over and over until the printmaker was satisfied with the plate.

Before printing the aquatint, the plate was washed and dried.  It was then inked and wiped clean, such that only the areas etched or “bitten in” retained the ink.  The plate was finally pressed onto paper using a printing press, and the process repeated where more coloured areas were required, stopping out appropriate sections and using different coloured inks.

Also on display in this cabinet were the following aquatints:

[8] Note: Given that it is not possible to create a fine line with aquatint, many artists chose to outline their subject on the plate before any aquatint ground was laid, as per the process of etching.