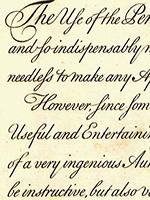 For line engraving, copper was the preferred metal, with its earliest use recorded from the 1430s.  Until the 19th century, when steel was introduced, few metals other than copper were employed for intaglio printmaking.  Iron was used occasionally but it was very hard to engrave and most extant iron printing plates of the early 1500s suggest the material was better suited to etching.  Lead and tin could also be engraved but they tended to be too soft for the printing of numerous fine illustrations, the plates wearing quickly after repeated inking and wiping.  Sometimes brass was chosen; it was cheaper than copper but it was much harder than pure copper and consequently more difficult to engrave.  Bronze (copper mixed with tin and various other metals) could also be engraved and was, in fact, used for plates in France throughout the 19th century.  Merely an alloy of copper, though, it too proved inferior to the naturally occurring element.  Copper could be etched, it was soft enough to be exquisitely engraved, it could be scraped, polished, and printed from a thousand times over; it was readily available and much less expensive than silver and gold.  It wasn’t cheap though, and for this reason copper plates were occasionally engraved on both sides.  Though there are very few original plates remaining from the 15th and 16th centuries, it is the material most often referred to in historical literature from which large print runs could be pulled, giving hundreds of impressions before wear to the plate became visible and it needed to be re-engraved.

The skill required to engrave a plate cannot be overstated.  Engravers needed artistic ability, excellent judgment and attention to detail.  They also needed good eyesight and patience.  Above all, they needed the ability to work in reverse, since engravings produced a reverse print.  Nowhere is this talent more obvious than in the finest of copperplate writing.  To be able to write in linked script precisely and evenly is one thing; to do that backwards is an entirely different skill.  Englishman, George Bickham the Elder, was a master of the art of copperplate lettering, as evidenced in The universal penman (1750), the text of which he even managed to justify both left and right.  To produce such fine work, it’s possible that he, like many other engravers, propped up the original design in such a way that he could see it in a mirror, in reverse. 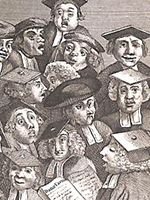 As is the case with many woodcutters and wood engravers, most early copperplate engravers were not identified.  The prints were frequently described in the literature as being “after” the artist who drew or painted the original work from which the engraving was made.  It is true that some artists, including J. M. W. Turner and John Ruskin, closely supervised the engraved reproductions of their work, gaining a practical knowledge of the trade in the process but most would not have been able to perform on copper in the same way they could on paper.  In later years, particularly from the 1700s, talented engravers enjoyed some credit.  By engraving their name, in miniscule letters, at the bottom of each copper plate which, in turn, appeared on the final print, a reputation was established.  This early form of recordkeeping is enormously important for today’s researchers.  It put a name to the valuable conduit that existed between original artist and author.  Where artistic licence had been granted to the engraver, it also afforded valuable insight into how the engraver thought an illustration should connect with the text.  How they chose to represent a subject or an object through engraving could, and did, influence beliefs and perceptions of truth, particularly when that engraving appeared alongside associated text for the very first time.  It might be years before a different or more scientifically accurate representation emerged.  Among the finest engravers to hold this power, were William Hogarth, Johann Georg Wille, William Woollett, Thomas Holloway, William Blake and George Cooke.

The copperplate engraver required only a few simple tools; a set square, a compass for scribing circles; a ruler as a guide for parallel lines, and most importantly, a ‘burin’.  The burin or graver had a short wooden handle, shaped much like a mushroom, which fitted into the palm of the hand.  Its tempered steel shaft was about 10 cm long.  It ended in a very sharp cutting face, usually of square or lozenge shape and was capable of cutting v-shaped channels or grooves.

Before any engraving could begin, the illustrated design needed to be transferred onto the copper plate’s surface.  In his 2009 publication, The art of the printmaker 1500-1860, Roger Baynton-Williams suggested that many engravers chose the etching method to essentially bite-in this initial outline.  However, there was another common practice.  The copper plate could first be coated with a film of wax, allowing the engraver to trace the outline onto it using a drypoint, an etching needle or stylus of sorts.  When the wax was wiped off, the tracing left behind thin scratches which acted as guidelines for the engraver; some of these could still be seen in the final print.  Stijnman even notes that traces of the drypoint outlines, known as pentimenti, were found from the very beginnings of engraving in the 15th century and may highlight differences in the original intentions of the design and the changes made along the way in producing the final engraving.[1] 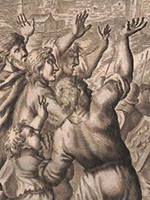 The image transferred, the engraver then worked by natural sunlight (usually filtered with a screen) or by lamplight, placing the copperplate on a leather bag or cushion and turning the latter with one hand whilst engraving with the other.  With their fingers pressed to the underside of the burin handle, the engraver used only their index finger, on top of the tool’s metal shaft, to guide it through the plate, parallel to its surface.  For maximum control, they always pushed the burin away from themselves, taking care not to cut their fingers on the pieces of metal removed as these could be razor-sharp.

Whilst many lines created with the burin were the same width from end to end, and this in itself took skill, a good engraver could vary that width, creating the subtlest curve or impression of movement within the design.  Similarly, they could add light and shade to sections of the engraving, digging deeper with the burin in some areas to create more black detail on the final print.  They even mastered tone by ‘hatching’ (lightly scratching) thin and straight lines parallel to each other, and by ‘cross-hatching’, in which those parallel lines crossed at angles.

Once the plate was engraved, its surface was covered with ink and a cloth dabber was used, in a circular motion, to push that ink into all of the engraved incisions.  The plate surface was then wiped clean of any excess ink.  This required some skill.  Leave behind too much ink and this could create unwanted, dense areas of black on the finished print; over-clean and there may be insufficient ink to create a good impression.  The inked plate was now ready for printing.  Unlike the ‘relief’ method of printing, which required very little pressure, the copper plate needed the weight of a printing press so that the finest of engraved detail could materialise.  It was placed in the press with a piece of slightly dampened paper over it, followed by a felt blanket.  The whole was then pressed with great force to push the ink into the engraved channels.  The amount of pressure required was evidenced in the plate mark or indentation in the paper, which remained visible around the edges of the final print.

Also on display in this cabinet were the following copperplate engravings: