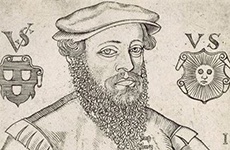 In the context of printing, the word ‘intaglio’ is used to describe the techniques by which an image is incised into a metal surface.  The opposite of the relief printing process, it produces an illustration based on the detail that is removed from the metal surface.  The incised grooves are filled with ink and a damp sheet of paper is gently pushed into the grooves to pick up the ink, generating the printed image.  There are two principal methods for intaglio printmaking – engraving, in which a tool is used to remove thin slivers of metal from the surface, and etching, a chemical process which uses acid or mordant to reveal the design.  Depending on how the metal was incised, the engraver and printer could produce a variety of illustration styles, examples of which include: line engraving, drypoint etching, mezzotint, stipple engraving, soft-ground etching and aquatint. 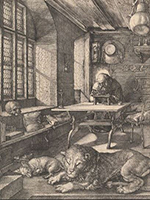 Line engraving, with its prints comprised of incised lines, was the most widely adopted, and probably earliest, method of intaglio engraving.  It likely found its origin in the workshops of the gold- and silversmiths, where the craftsmen not only used the method to decorate and inscribe their metalwork, they generated printed impressions as a means of recording it.  Though engravings on metal emerged as early as the 1430s, the earliest illustrated act of engraving on a metal plate appeared in c1465, when Baccio Baldini engraved a goldsmith at work on a flat, rectangular plate in his shop.[1]  It would be almost a century later, in 1562, when the first depiction, by Balthasar Jenichen, of an engraver at work on a copper printing plate appeared.[2]  We are fortunate to know their names, since so few early engravers have been identified.  As Anthony Gross points out in his Etching, engraving, & intaglio printing, most were known to us by their work only, historians having invented names for them based on their prints – ‘Master of the Playing Cards’, ‘Master of the Garden of Love’ and ‘Master of Saint John the Baptist’.[3]  By the 16th century, though, some names had become synonymous with fine line engraving.  In Italy, painter Andrea Mantegna, who had turned his hand to engraving, earned widespread acclaim for his clarity and boldness of image.  His engraved print, ‘Battle of the seas gods’, with its subtle gradations of light and shadow and its dynamism, undoubtedly inspired the later engravers,  Marcantonio Raimondi, who produced engraved copies of Renaissance painter, Raphael’s works, and Albrecht Dürer, whose ‘Knight, death and the devil’ and ‘Saint Jerome in his study’ pieces stood him apart, virtually from all others.  The talent of these early print engravers was not lost on 17th and 18th century successors such as William Hogarth and William Blake, the latter of whom really renewed the art of bookmaking and printing, by etching and engraving his own illustrations to accompany his own text.  As both artist and engraver he could connect more directly with his audience, and his books, with their co-existent and cohesive images and text, facilitated a transfer knowledge which was particularly meaningful –the kind arguably obtained only where author and illustrator were one and the same.

[2] Balthasar Jenichen, created a portrait of artist and printmaker, Virgil Solis, in the year of Solis’ death.  It shows Solis as an engraver, holding a burin and working on a metal plate.  The design is very similar to those of playing cards.  On the bench in front of him are his tools, including the burin, a sharpening stone and a double-ended etching needle.