Lithography, the art of drawing or writing on stone, was unlike any other relief or intaglio printmaking method.  It used simple chemical processes, based on the mutual repulsion of water and oil to create an image; it also depended on the natural ability of calcareous stone to absorb grease and moisture.  Lithography was a comparatively simple process and meant that many artists could, for the very first time, produce their own prints. 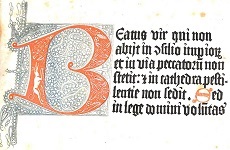 Its inventor, aspiring German actor and playwright, Alois Senefelder, discovered the process by accident in about 1792 when, too poor to publish his plays, he began experimenting with soap, wax and lampblack on copper with the aim of printing his own work.  Copper was expensive, though, and he was soon obliged to practice his writing on polished stones.  On one of these, he wrote an account of some linen his mother was sending to be washed, using a composition of soap and wax, before corroding the smooth surface away with acid such that the letters stood out in relief, ready to be inked.  He soon discovered that it wasn’t necessary to lower the surface of the stone below the letters, and that simply moistening it was enough to prevent any printing ink from adhering to the parts covered with his waxy composition.  Pleased with the results, he offered the technique to a friend who published music, and continued to experiment with the process until, attempting to find a method for transferring an image drawn on paper to the printing stone, he finally ‘discovered’ the true lithographic process.

Senefelder documented the history and techniques of his discovery in Vollständiges Lehrbuch der Steindruckerey, (A complete course of lithography: containing clear and explicit instructions in all the different branches and manners of that art…) which was published in English by R. Ackermann in 1819.  From then on, lithography quickly developed, generating concern amongst those who had dedicated considerable time and energy to perfecting the art of engraving.  Though lobbying on their part saw the introduction of a heavy tax on imported stone in England, engravers’ fears were soon realised, lithography having taken a stronghold and intaglio printing methods all but fading away. 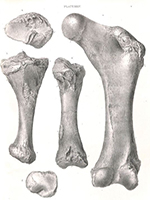 By the mid-19th century illustrated books were no longer the exception, with monochrome images gracing the pages of many a natural history text or travel guide.  Around this time, multi-colour printing also began to emerge.  Chromolithography, which stemmed from the process of lithography, reached a wide audience in 1851 at the London Great Exhibition, where printers were able to display their latest technologies and colour souvenirs.  The introduction of colour printing was one of the most exciting milestones in the history of printing, and one which impacted on all aspects of society.  It was still expensive when used for the finest quality prints but simple adjustments to the number of colours used and refinements to image detail, resulted in much cheaper prints.  Combine this with the fact that stone lithography could produce thousands of images without image degradation, (many more than steel or copper engravings), and colour printing suddenly became available to the mass market, where it was further embraced for advertising and trade packaging.

Lithography was a form of planographic printing, in which the image was taken from a flat surface, as opposed to a raised surface (relief) or incised surface (intaglio).  At its simplest the process involved:

The stones used in lithography were chalky and needed to readily absorb grease and moisture.  In The art of engraving…(1841, p. 80), T. H. Fielding suggested that the best stones came from Bavaria in Germany, and if it weren’t for variations in their hardness, the limestone from Chateauroux in France might do as well.  The stones found near Bath, England, were of a coarser grain but were satisfactory for writing or transfers.

Essentially a combination of engraving and lithography, the transfer lithograph achieved a definition not possible with lithography alone.  It was a particularly useful technique for the printing of maps, where the lettering in place names needed to be clearly legible.  It followed the same process as employed for metal plate engraving until the point of image transfer.  Instead of inking the plate and printing the illustration onto paper, the image was transferred onto a special transfer paper.  This, in turn, whilst still wet, was laid over the lithographic stone, such that the final print did not appear in reverse as it did in normal intaglio printing.  The stone could then be used to print from, as in traditional lithography, with the added benefit of saving the original metal plate from wear.

Also on display in this cabinet were the following lithographs: