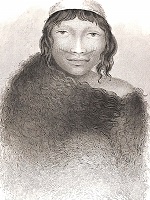 Another of the intaglio printmaking techniques, steel engraving produced illustrations based on steel, rather than copper.  The method was first introduced in 1792 by American physicist, Jacob Perkins, for the printing of banknotes, and was later adapted in England by Charles Warren for Thomas Campbell’s 1820 poem ‘Pleasure of Hope’, which contained the first published plates engraved on steel.

Until this time, copper had been the preferred metal for engraving.  The plates were soft, simple to carve, and were capable of producing a few hundred prints before re-engraving was required to sharpen the image.  These characteristics made copper an attractive medium, particularly for mapmakers who frequently needed to update their prints when new land was discovered or existing land changed hands.  By the 1820s, however, a shift towards steel for engravings began to emerge.  Steel was cheaper than copper and the engraved plates produced much sharper and more distinct lines.  The plates were also harder-wearing, resulting in thousands of prints before re-engraving became necessary.  This hard nature allowed for much finer detail than copper and, for the first time, it was possible to achieve a beautiful pale grey in the final illustration.  With its shimmering appearance, the steel engraving became instantly recognisable.

Though it looked more refined than its copperplate counterpart, the steel engraving was actually created in much the same way.  The steel plate was engraved with a burin that produced thin, furrowed lines which, in turn, left behind a ‘burr’.  This burr was then scraped away so as not to introduce unsightly spots into the final print.  This process was not easy for the engraver.  The steel was so hard that many turned to etching the plate instead; acid quickly created image outlines in the plate where ‘ground’ had been removed with an etching needle.  Once the engraver was satisfied with their work, the plate’s surface was inked and wiped in a circular motion to push that ink in the incised lines.  A piece of slightly dampened paper was then placed on top of the plate and the whole pressed with sufficient force to produce the final print.  As in copperplate engraving, a plate mark or indentation in the paper remained visible around the edges of the illustration.

In its heyday of the 1820s-1840s, steel engraving was responsible for some of the most superb illustrations.  Steel allowed engravers to push the craft to its absolute limits; in some prints it was only possible to see the individual lines with a magnifying glass.  Some illustrations were so authentic, so real, that it was not impossible for the reader, particularly of travel books, to actually imagine themselves there.

Also on display in this cabinet were the following steel engravings: