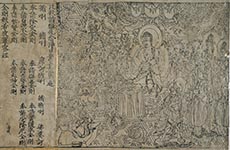 Created using ‘relief’ techniques, the woodcut first appeared on textiles in Japan around the seventh century, and earlier still in China and Egypt.  Its use on paper came much later, as seen in the famous Diamond Sutra, printed from a collection of seven woodblocks in China in 868 A.D.  Each block, cut to show text or a picture in relief, was printed onto a strip of paper, the latter then pasted together to form a scroll spanning some 16 feet.[1]  It is the earliest dated example of woodblock printing in a book, and likely inspired the first single-page religious prints from woodblocks in Europe.[2]  Levarie, in her publication, The art and history of books, suggested that these prints were often purchased in Germany, France or the Netherlands during pilgrimages, then hung on the walls of houses as shrines.[3]  ‘Block books’ of the mid to late 1400s, in which the text and picture(s) for a page were cut from a single piece of wood, were undoubtedly a natural development of these prints.  Some of the earliest block books, also known as ‘xylographica’, include the first Apocalypse editions (1460-65), based on Saint John’s revelations in the last book of the Christian Bible, and Ars memorandi  (The art of memorising, 1460-70), with its large symbolic woodcuts designed to assist the clergy in remembering the Gospels.

Despite the invention of moveable type in the 15th century, block books remained popular well into the 1500s.  Some have attributed this lingering popularity to the poor durability of early (and soft) metal type but it may also find some basis in the superbly precise and ambitious works of emerging woodcut artists such as Albrecht Dürer, Hans Holbein and Jost Amman.  Sadly, many of the very earliest woodcutters remain unknown.  What makes this particularly regrettable is that they were the first to provide readers with a link, a connection of sorts, between text and image, albeit a simple, and at times, obscure one.

When a piece of wood is cut from a tree’s trunk or branch it can have different surface textures; it may be smooth (cut with the grain) or rough (cut against the grain).  A woodcut is made from the ‘plank’.  That is, a piece of timber, cut with the grain, which is smooth.  This would then be finished to a thickness of approximately 2-3 cm.  Whilst its surface needed to be completely flat, the edges were often left in their rough state, leaving most woodblocks with a rather crude appearance; they certainly weren’t always square or rectangular.  Once its surface was perfectly smoothed, the outline of the image to be carved was traced onto it.  The woodcutter or ‘block-cutter’ then cut away, using sharp knives and finely tipped chisels, all of the wood that was not to be part of the printed design, leaving only the image to stand out in relief.  Though the block-cutter only needed to remove a millimetre or two of the background area, they often cut away more so as to minimise the risk of its contact with the printing paper.  Combine this with the desire to produce the finest of outlines, and one slip of the chisel could bring the whole image apart.  Accidents such as these were not uncommon given the soft to medium density of the wood chosen for woodcuts.  Although these mistakes could be rectified by cutting out the damaged area, inserting another piece of wood and recutting, this was time-consuming, and woodcutting was a laborious process at the best of times.  So, block-cutters devised a clever method for avoiding these mishaps by gouging out the wood on either side of the outline at an angle.  It resulted in a triangular shape, in which the thinnest part of the triangle was at the image surface and the thickest, at the base of the block.  It kept maximum strength in the wood and allowed the cutter to produce the finest and most even of lines.

Early printing of a woodcut was quite simple.  On rare occasions the relief image was inked and then ‘stamped’ onto the paper using pressure from the printer’s hand or a hammer.  More commonly, though, the woodblock was placed face up, the paper laid upon the inked design and then the back rubbed – sometimes with the printer’s hand but often with a hard pad or frotton.  The ink used in the earliest of illustrated block books was usually a water-based brown or grey.  Its nature, combined with the damage caused by rubbing the paper, meant that both sides of page could not be printed upon.  Challenges associated with carving the wood, coupled with the risk of it splitting under pressure, also saw the woodcut suited to only the simplest of designs.  Its printing lifespan wasn’t long and the printed image itself revealed little to no depth or perspective.  Still, the woodcut enjoyed great popularity throughout the 15th and 16th centuries, particularly with the introduction of presses and moveable type.  Letters could now be set in a press at the same height as the relief image and a complete print made with just one pull of its handle.  Negating the need entirely for manually cut text, typesetting sped up the printing process, making it easier and much more economical.  Developments in ink, too, by the late 1400s saw printing on both sides of paper with oil-based ink. 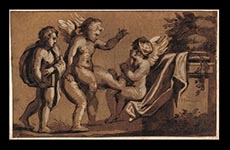 Unlike the earliest of woodcuts, which were intended to be coloured by hand, if at all, the Chiaroscuro woodcut involved printing with tonal hues.  Though its invention has generally been attributed to Lucas Cranach or Hans Burgikmair in Germany, around 1509, some suggest the method only imitated earlier Italian drawings and paintings, in which coloured paper was used to create a mid-tone.  The artist treated this coloured paper as the middle tone for their picture and then created light (chiaro) by adding white gouache and dark (scuro) by adding cross-hatching in dark ink.[4]  To achieve a similar effect, the Chiaroscuro woodcut printmaking technique required multiple woodblocks.  One revealed the image outline and cross-hatching and was, at times, capable of producing a fine black and white woodcut itself.  A second acted as a tone block; once inked and combined with the first, it functioned in much the same way as the coloured paper in a Chiaroscuro drawing or painting.  If another tone block was introduced, it became possible to create a level of shading.  If the same areas of all the blocks were cut away, the paper would remain unprinted there, and the white would produce impressive highlights. 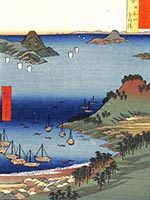 Made famous by great print masters such as Andō Hiroshige and Suzuki Harunobu, the Ukiyo-e woodcut first appeared in Japan in the 17th century (Edo period).  The earliest cuts tended to reflect hedonistic aspects of Japan’s ukiyo or ‘floating world’ culture, with prints of kabuki actors, courtesans and geisha considered particularly appealing by those of lower socioeconomic standing.  Armed with new money from Tokyo’s rapid economic growth, the merchant class embraced the artistic genre and adorned the walls of their houses with the erotic prints.  The 18th century saw the introduction of colour to the prints, and by the 19th century the West had whole-heartedly welcomed the most beautiful of Ukiyo-e landscape prints, as perfected by artists such as Katsushika Hokusai.

The defining feature of the Ukiyo-e print was its bold, flat outline.  This was usually provided by the artist by means of an ink drawing on paper, which was then pasted onto a block of wood and then rubbed with oil until the upper layers of the paper could be pulled away.  What remained was a translucent layer of paper that the block-cutter could use as a guide to cut away the areas not intended to be printed.  The raised outline would be inked, a sheet of paper applied to its surface, and the latter then rubbed down with a round pad.  By the 1740s it was not uncommon to see multi-colour Ukiyo-e prints, the effect achieved by inking and applying a woodblock for each colour required.  By the early 1800s the quality of the prints was so fine, their colours so exquisitely vibrant, that affording one was no longer a reality for most collectors.

On display in this cabinet were the following woodcut illustrations:

[1] The Diamond Sutra, Buddhist text. Wang Jie commissioned a block printer to create a 17.5 foot scroll in 868 A.D. It is currently held in the British Library and is acknowledged as the oldest dated, printed book in existence.

[2] Hind, Arthur M., Keeper of the Dept. of Prints and Drawings at the British Museum (1933-45), and leading authority on woodcuts, suggests the earliest of these text/picture cuts could date from 1410.  However, the first print, actually dated, and with lettering cut below the picture, is the famous 1423 St. Christopher which depicts the Saint carrying the Christ Child through water.  It is preserved in the John Rylands Library, Manchester.