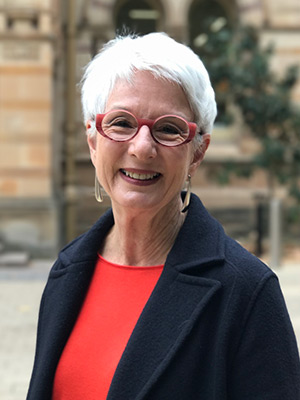 The University of Adelaide’s Deputy Chancellor has received the highest honour in the Queen’s Birthday awards this year.

The Hon. Catherine Branson, QC, was awarded the Companion of the Order of Australia (AC) for eminent service to the judiciary as a Judge of the Federal Court of Australia, to the law as an advocate for human rights and civil liberties, to judicial administration and professional development, and to governance roles in tertiary education.

“I feel greatly honoured to have been appointed as a Companion of the Order of Australia,” says the Hon. Catherine Branson.

She served for more than 14 years as a judge of the Federal Court of Australia and for four years as President of the Australian Human Rights Commission. She received a Distinguished Alumni Award from the University of Adelaide in 2011. Catherine Branson is a Fellow of the Australian Academy of Law.

Ms Branson is a former Crown Solicitor of South Australia and CEO of the Attorney-General's Department.

“I think of my career as having three major highlights. First, my appointment, shortly before I turned 36 years of age, as Crown Solicitor of South Australia and Permanent Head of the Attorney-General's Department,” says Ms Branson.

Members of the wider University community have also been honoured.

Emeritus Professor Geoffrey Harcourt has been awarded an AO for eminent service to higher education as an academic economist and author, particularly in the fields of Post-Keynesian economics, capital theory and economic thought. Professor Harcourt’s significant contribution to the University is acknowledged through the Geoff Harcourt Visiting Professorship.

The University of Adelaide congratulates all the recipients as well as alumni and friends of the University acknowledged in the Queen’s Birthday Honours.