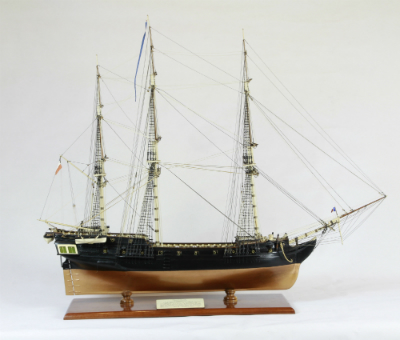 The University of Adelaide’s French Department will host a lecture exploring stories of triumph and tragedy in French sea voyages to Australia during the 18th and 19th century, with a focus on the lighter side of our shared maritime history.

The lecture is the final in a series of free public events themed, What have the French ever done for us?, celebrating 100 years of the University’s French Department in 2018.

The lecture will be presented by Professor John West-Sooby and Professor Emerita Jean Fornasiero from the University of Adelaide’s French Department. Both have worked extensively on French maritime exploration in the Indo-Pacific, notably the expedition to Australia led by Nicolas Baudin in 1800–1804.

“The talk aims to recapture something of the human dimension of French scientific voyaging to Australia during the period (late 18th to early 19th centuries), by drawing out some of the lighter or more quirky moments of that lived experience,” says Professor West-Sooby.

“Voyages of discovery in the Age of Sail were often fraught with danger, and many lost their lives in the pursuit of their objectives. What can get lost is the lived experience of the people themselves, not just during moments of great import, but as they went about their daily routines,” he says.

There was a succession of French visitors via sea voyage during the latter decades of the 18th century in pursuit of various objectives.

“Reflecting on the lighter moments helps to remind us that these explorers, who tend to be represented as fixed and remote historical figures, were real people with the same human emotions and foibles as us,” Professor West-Sooby says.

WHAT:     Tall Tales and True from the History of French Exploration in Australia