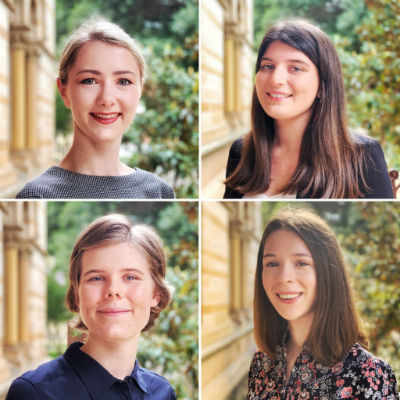 Four outstanding University of Adelaide undergraduate students have been awarded New Colombo Plan scholarships with one named as a New Colombo Plan Fellow. Under the plan the four students will live, study and work in the Indo-Pacific region in 2019 for up to 12 months.

The students were selected on the basis of their academic performance, community leadership and for demonstrating a proven commitment to forging a long-term relationship with the Indo-Pacific region. They are among 125 students from 40 Australian universities to receive the scholarships. The scholarships are open to students aged 18-28 currently studying at an Australian university.

“Through study at our partner institutions in China, Japan and Singapore, they will develop new skills, networks and friendships which will, in the long run, benefit not only themselves but the wider South Australian community.

“I’m particularly delighted that Bridget Smart has been named a New Colombo Plan Fellow as the top ranked student for Singapore. This reflects Bridget’s outstanding academic and community service and is well deserved,” says Professor Cromar.

Bridget Smart is a first-year student, studying for a Bachelor of Mathematical Sciences (Advanced). She has an outstanding academic record.

Bridget is a current recipient of the Martha Sved Scholarship (for women in maths), an Adelaide Undergraduate scholarship and a Commonwealth Scholarship. She promotes the benefits of STEM to female high school students and is a member of the University’s Mathematics Society committee and the Women in STEM Society committee. Bridget wants to develop stronger ties between the University of Adelaide’s School of Mathematical Sciences and the maths department of the National University of Singapore.

Rhona Hamilton is studying for a Bachelor of Science majoring in physics with a Diploma in Languages. She is a multiple prize-winning member of the Faculty of Science who is looking to a future as a researcher. The scholarship, which will take her to the University of Tokyo, Japan, will give her the opportunity to develop research links that will be of great benefit to her future career.

Maria Positano will be heading to Shanghai Jiao Tong University, China. Maria, who is studying for a Bachelor of Media and Bachelor of Laws, has won awards from the Department of Media and her work has contributed to the development of a course in popular media. Maria volunteers at the Roma Mitchell Community Legal Centre and the Jodi Lee Foundation. She aspires to be an international lawyer with a focus on the Indo-Pacific. She is also a Price Waterhouse Coopers scholar.

Sophie Eather is extremely passionate about China, in particular the growing wine tourism industry between China and Australia. While studying for a Bachelor Commerce (International Business) and Dip Languages, she works at Penfold’s Magill Estate where she uses her excellent Mandarin to assist Chinese dignitaries and visitors. She heads to Fudan University, China under the New Colombo Plan program.

“The scholarships are a recognition of the students’ academic and personal achievements to date and the contribution and leadership that the Australian Government believes they will make in the future,” says Professor Cromar.