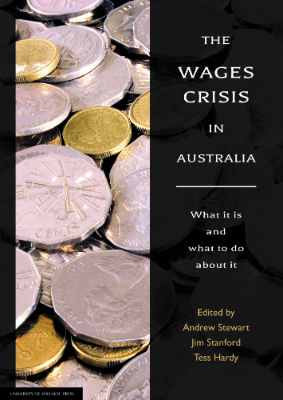 A new collection of research from leading Australian experts and commentators casts further light on the unprecedented slowdown in wage growth that has puzzled and concerned policy-makers.

The new book, The Wages Crisis in Australia: What it is and what to do about it, presents an agenda for immediate policy reforms to re-ignite wage growth. The book, published today in both paperback and online, is edited by three of Australia’s top labour market thinkers:

The editors assembled experts from business, universities, think-tanks, community organisations and trade unions to answer four pressing questions: What is the wages crisis? Why is it happening? Why does it matter? And what should we do about it?

Written in non-technical terms for a general audience, the 20 essays offer important insights into one of Australia’s most pressing economic and social issues.

The contributors provide numerous perspectives on the causes and consequences of wage stagnation. But a clear and consistent theme emerges throughout the book: this problem will not fix itself, but rather requires decisive policy action.

“There is no one solution to what is a multi-faceted problem. But in the first instance, we need governments at all levels not just to take action, but to acknowledge their own role in keeping a brake on wages,” said Professor Andrew Stewart, book co-editor and John Bray Professor of Law, University of Adelaide.

“The consequences of weak wages are being felt in all areas of economic and social life. From financial stress in households, to the persistent gender pay gap, to young workers being pushed into precarious work – the stagnation of wages is doing profound damage to Australian society,” said Dr Tess Hardy, book co-editor and Co-Director, Centre for Employment and Labour Relations Law, University of Melbourne.

“Simply waiting for supply-and-demand forces to solve the problem is not going to work. Structural and policy factors have clearly contributed to the crisis in wages, and those factors need to be tackled with an active strategy to get wages growing again,” argues Dr Jim Stanford, book co-editor and Director of the Centre for Future Work.

In their conclusion to the book, the three editors present a five-part agenda of immediate policy reforms to re-ignite wage growth, and thus contribute to a stronger and fairer economy. Their proposals include lifting restraints on wage growth in public services; modernising industrial laws to stop the erosion of collective agreement coverage; strengthening compliance with minimum wages and other minimum standards; and legal changes to prevent businesses from evading normal obligations through outsourcing or supply chain strategies.

The book will be formally launched this evening at the University of Melbourne Law School, with a presentation by Natalie James, former Fair Work Ombudsman and Chair of the recently-announced Victorian Inquiry into the On-Demand Workforce.