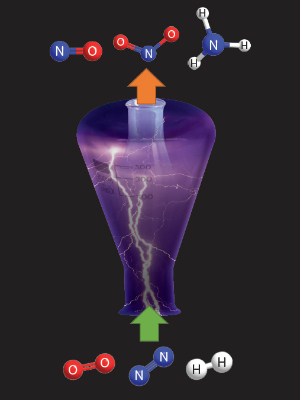 A University of Adelaide researcher, alongside members of an international team, has won an AU$16 million ERC Synergy Grant to use plasma energy to produce fertilisers which provides the opportunity for new business models and could even lead to crops on Mars.

“The SCOPE project (Surface-COnfined fast-modulated Plasma for process and Energy intensification in small molecules conversion) will investigate how new kinds of plasma and their symbiotic interaction with proprietary catalysts can be harnessed to transform the production of fertilisers,” says Professor Volker Hessel, Deputy Dean-Research from the University of Adelaide’s Faculty of Engineering, Computer & Mathematical Sciences and Professor in the School of Chemical Engineering.

“If the project, which has a six-year lifespan, is successful it could mean that fertilisers could be ‘tailored’ to individual environmental conditions.

“My research will focus on how ammonia and other nitrogen-containing molecules are made more efficiently by virtue of targeted creation of unstable molecules or atoms during reactions between plasma and proprietary catalysts.

“These chemical reactions are fundamental to the efficient production of fertilisers so are the focus of the project.”

This research could transform the chemical, energy and agriculture industries as ammonia has a key role for the world economy as an energy storage fuel and an essential component of fertilisers. Ammonia is the second-most abundant chemical on Earth and 180 million tonnes are produced each year by global industry.

“Development of plasma plants that can be used in the manufacture of fertiliser began five years ago in collaboration with German specialist chemicals leader Evonik. The research was carried out at Eindhoven University of Technology, Netherlands. Results from the SCOPE project will improve the efficiency of this technology.”

This is the first time an Australian university has been awarded an ERC Synergy Grant which is part of the European Union’s research and innovation programme, Horizon 2020.

“Only 5% of applications to the ERC Synergy Grant, the most distinguished grant in Europe, are successful which reflects the cutting-edge nature of the research. Only researchers with the highest track record and the perfect team formation, or synergy, are successful in receiving funding from this very competitive scheme,” says Professor Hessel.

Professor Hessel will work with principal investigators from Italy, Belgium, and UK who will bring together different skills and resources to tackle this ambitious research project. To ensure the European integration of his research, Professor Hessel will collaborate with catalyst expert and entrepreneur Professor Evgeny Rebrov at the University of Warwick, UK. Professor Rebrov will take a reciprocal role at the University of Adelaide.

“Similar work in another EU pilot project with Uganda is underway to implement precision farming ‘e-agriculture’ techniques by manufacturing fertilisers at the rural farm level. The plasma-made fertilisers are planned to be applied to crops in a flexible manner using local weather data from information and communication technologies such as mobile phone apps,” says Professor Hessel.

“In a more far-fetched scenario, the technology could be used to successfully grow food on Mars, as it is compact, uses green energy from the sun, and only requires nitrogen and water.”

Work on the SCOPE project is planned to begin in April 2019.