Early Egypt through the eyes of Australians 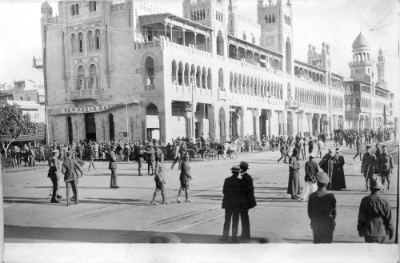 Seen through the eyes of Australians en route to the First World War, Egyptian Images from Australia shows Egypt as it was one hundred years ago.

“The exhibition displays 65 images of street vendors, monuments, a vast military camp in front of the pyramids, palaces converted into hospitals, and Australians and Egyptians working together.

“Most of the volunteer soldiers and nurses had never been outside Australia, and photography had recently become more accessible with the availability of smaller cameras such as the Vest Pocket Kodak, which was marketed as ‘the soldier’s Kodak’.

“After the war, many thousands of their photos made their way into national and state collections including the State Library of South Australia, which has several photos in the exhibition.

“Such photos are mainly used by researchers to illustrate Australian military history. After living in Egypt, I realised that they had other stories to tell, and that the pictures would have different meanings for Egyptians.”

First exhibited in Cairo and Alexandria, this is the first time the exhibition has been shown in Australia. It also features reinterpretations of historical photos from a workshop led by Egyptian artists Shady El Noshokaty and Eman Elbana, who will speak at a seminar this Friday on The Other Sides of War Photography.

The exhibition is presented by the University of Adelaide’s Centre for Asian and Middle Eastern Architecture (CAMEA) and is supported by the Australian Government through the Council for Australian-Arab Relations (CAAR) of the Department of Foreign Affairs and Trade, and CAMEA.

The free exhibition is open at the State Library of South Australia from Friday 12 July to Sunday 4 August during library opening hours.

Image: Soldiers and other people in front of Heliopolis Palace Hospital, c. 1917 by an unknown photographer from the collection of the State Library of South Australia, PRG 280/1/15/944. Built as a luxury hotel but converted into an army hospital of 520 beds. By June 1915 it held 2,500 patients from the heavy fighting at Gallipoli, and had to expand into nearby buildings. Today this grand building is the Egyptian Presidential Palace and is hidden behind high walls.