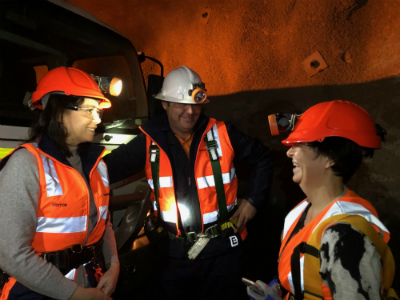 Additional funding of $5 million has been announced for the continuation of the Stawell Underground Physics Laboratory (SUPL). The University of Adelaide is a founding partner of the project to construct a national underground facility to study dark matter.

The project involves the construction of a general-purpose national laboratory 1025 meters underground at the Stawell Gold Mine in Western Victoria, to carry out ground-breaking research to detect dark matter using the SABRE experiment. The lab will be 30 metres long, 10 metres wide and 10 metres high.

“SUPL provides researchers with an essential platform for their pursuit of the discovery of dark matter and serves a pressing international need for a Southern Hemisphere underground facility.”

Understanding the particle nature of dark matter, which is thought to account for approximately 85% of the matter in the universe and about a quarter of its total energy density, is cutting-edge physics and the most important open question in physics today. Its discovery will have the same importance and impact as the discoveries of the Higgs Boson and gravitational waves. SUPL is essential to that quest.

SUPL is not just an underground physics laboratory. Its deep-underground and ultra-low radioactivity environment, and the spin-off technologies from its ultra-sensitive detectors are also of interest to nuclear science (ANSTO), defence (DST Group - especially in homeland security), geology and geophysics, engineering, biology and cancer research, and astrobiology (exobiology) to name a few.