An international team of scientists, including from the University of Adelaide and Curtin University, has found the first evidence of a source of high-energy particles called neutrinos: an energetic galaxy about 4 billion light years from Earth.

The observations were made by the IceCube Neutrino Observatory at the Amundsen–Scott South Pole Station, and confirmed by telescopes around the globe and in Earth’s orbit.

The announcement was made at the the National Science Foundation in the US today.

This discovery points to a source of cosmic rays, another type of high-energy particle which has posed an enduring mystery since first detected over 100 years ago.

Neutrinos are uncharged subatomic particles that normally pass by the trillion through our bodies and every part of the Earth every second, but they rarely interact with matter – a fact that makes them difficult to detect. 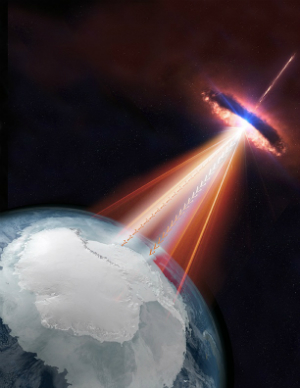 "Neutrinos at these very high energies are formed after cosmic ray particles are accelerated (boosted to very high energy) and interact with other particles,” says Associate Professor Gary Hill, from the University of Adelaide’s School of Physical Sciences and member of the IceCube Collaboration.

“So what we’ve found is not only the first evidence of a neutrino source, but also evidence that this galaxy is a cosmic ray accelerator.”

IceCube researchers announced the first solid evidence for high-energy neutrinos coming from beyond our galaxy in 2013.

“Now we have found the first evidence for a specific source object, a blazar, which is a very high energy type of galaxy,” says Associate Professor Hill. “This blazar, designated TXS 0506+056, is about four billion light years from Earth. It’s a giant elliptical galaxy with a massive spinning black hole at its core and twin jets of light and high-velocity particles, one of which is aligned towards Earth.

“I have been working in this field for almost 30 years and to find an actual neutrino source is an incredibly exciting moment. Now that we’ve identified a real source, we’ll be able to focus in on other objects like this one, to understand more about these extreme events billions of years ago which set these particles racing towards our planet.”

Two papers published today in the journal Science describe the first evidence for this known blazar as a source of high-energy neutrinos.

The IceCube Observatory at the South Pole is equipped with a nearly real-time alert system which is triggered when a very high-energy neutrino collides with an atomic nucleus in the Antarctic ice in or near the IceCube detector.

On September 22 last year, the observatory broadcast the coordinates of a neutrino detection to telescopes around the world, calling for follow-up observations of the event.

Around 20 observatories on Earth and in space responded to IceCube’s alert including NASA’s orbiting Fermi Gamma-ray Space Telescope, the High Energy Stereoscopic System (H.E.S.S.) in Namibia and the Major Atmospheric Gamma Imaging Cherenkov Telescope, or MAGIC, in the Canary Islands—which detected a flare of high-energy gamma rays associated with TXS 0506+056.

Associate Professor James Miller-Jones from the Curtin University node of the International Centre for Radio Astronomy Research was involved in the team following up the event at radio wavelengths with the Karl G. Jansky Very Large Array in New Mexico, USA.

“It’s really exciting for Australian-based astronomers to be involved in uncovering these new insights into the high-energy Universe," he said.

University of Adelaide’s Associate Professor Gavin Rowell is a member of the H.E.S.S. team. He says: “This result heralds a new era for neutrino astronomy, and opens up the long-anticipated linkages with observations using photons or light, such as gamma-rays and radio waves.”

Dr Sabrina Einecke worked on MAGIC at the Technical University of Dortmund in Germany, and is now at the University of Adelaide. She says: "Seeing gamma-rays with MAGIC at the same time as the neutrino is an important piece of evidence suggesting that these were both made by processes in the blazar jet."

IceCube is operated by the IceCube Collaboration of 300 physicists and engineers from 48 institutions in 12 countries, and is led by the University of Wisconsin-Madison, with major funding from the US National Science Foundation. The University of Adelaide research was supported by the Australian Research Council.

The two Science research papers are:
Multimessenger observations of a flaring blazar coincident with high-energy neutrino IceCube-170922A; and
Neutrino emission from the direction of the blazar TXS 0506+056 prior to the IceCube-170922A alert