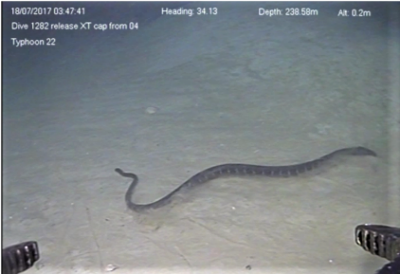 Sea snakes, best known from shallow tropical waters, have been recorded swimming at 250 metres in the deep-sea ‘twilight zone’, smashing the previous diving record of 133 metres held by sea snakes.

Footage of a sea snake swimming at 245 metres deep, and another sea snake at 239 metres has been provided to University of Adelaide researchers by INPEX Australia, an exploration and production company operating in the Browse Basin off the Kimberley coast of Australia. Both snakes appeared to belong the same species.

Sea snakes are found in tropical waters of the Indian and Pacific Oceans and are typically associated with shallow water habitats like coral reefs and river estuaries.

“Sea snakes were thought to only dive between a maximum of 50 to 100 metres because they need to regularly swim to the sea surface to breathe air, so we were very surprised to find them so deep,” says Dr Jenna Crowe-Riddell, lead author of the study and recent PhD graduate at the University of Adelaide’s School of Biological Sciences.

Oceanic depths between 200 and 1000 metres encompass the mesopelagic zone, sometimes called the ‘twilight zone’ because only a small amount of light reaches that depth.

“We have known for a long time that sea snakes can cope with diving sickness known as ‘the bends’ using gas exchange through their skin,” says Dr Crowe-Riddell. “But I never suspected that this ability allows sea snakes to dive to deep-sea habitats.”

These record-setting dives raise new questions about the ecology and biology of sea snakes.

“In some of the footage the snake is looking for food by poking its head into burrows in the sandy sea floor, but we don’t know what type of fish they’re eating or how they sense them in the dark,” she says.

The snakes were filmed in 2014 and 2017 using a remotely operated vehicle or ‘ROV’ undertaking work for the INPEX-operated Ichthys LNG Project. INPEX Director HSEQ (Health, Safety, Environment and Quality) Craig Haymes welcomed the landmark discovery, adding: “INPEX is proud to support this invaluable research that adds to understanding of sea snakes and deep marine habitats, as part of our commitment to protecting the environment.”

“Observations of sea snakes have typically been limited to shallow water habitats that are easily surveyed. But this shows what can be achieved through industry-university collaboration,” says co-author Dr Kate Sanders, ARC Future Fellow in the University’s School of Biological Sciences.”

Published in the journal Austral Ecology, the study is a collaboration between the University of Adelaide, the INPEX-operated Ichthys LNG Project, James Cook University in Australia, and The Royal Danish Academy of Fine Arts (KADK) in Denmark.