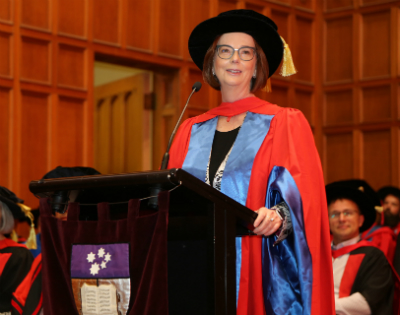 The University of Adelaide is recognising the outstanding contributions to society of four eminent Australians during the University’s graduation ceremonies.

The Hon. Julia Gillard, AC, has been awarded the Honorary Degree of Doctor of the University in acknowledgement of her exceptionally distinguished service to Australian society and to the University.

Ms Gillard, who studied law and arts at the University of Adelaide, is best known as Australia’s 27th, and first female, Prime Minister. Under her leadership, Australia weathered the Global Financial Crisis, built new relationships in Asia while also strengthening ties with traditional allies, and made advances in such areas as health and disability care, telecommunications and environmental sustainability.

Following her retirement from politics Ms Gillard has continued her public service and passionate promotion of the importance of education in many roles, including as Chair of mental health awareness body Beyond Blue, and as Chair of the Global Partnership for Education. She is also an Honorary Visiting Professor in the University of Adelaide’s Faculty of Arts, where she contributes to the fields of History and Politics.

Professor Peter Høj, AC, has been awarded the Honorary Degree of Doctor of the University in acknowledgement of his exceptional leadership in science, including the commercialisation of science, and to higher education.

He has demonstrated great leadership in the higher education sector, particularly in his roles on a variety of National education boards, and in his advocacy for reviewing the funding models for research-intensive universities.

Ceremony on Wednesday 1 May:

Professor Caroline McMillen is being awarded the Honorary Degree of Doctor of the University in acknowledgement of her outstanding contribution to health and medical science, and to leadership in research and higher education.

Professor McMillen is a passionate advocate for the role of STEM (science, technology, engineering and mathematics) in driving innovation, and for the role of universities as national and regional catalysts of economic and social transition. She is an esteemed leader in the higher education sector with more than 30 years in leadership roles across research, innovation and teaching.

Ceremony on Thursday 2 May:

Professor Hugh Possingham is being awarded the Honorary Degree of Doctor of Science in acknowledgement of his internationally recognised pioneering research into endangered species, conservation biology and ecological planning.

Professor Possingham, who studied undergraduate science, became a professor and remains an Emeritus Professor at the University of Adelaide, is one of Australia’s most respected ecologists. He has helped make the world aware of the importance of environmental science, conservation and ecological planning.

He is Chief Scientist of The Nature Conservancy, the world’s largest non-government environmental organisation, is former Director of the Australian Research Council (ARC) Centre of Excellence for Environmental Decisions, and of a National Environmental Science Program Hub, and an ARC Laureate Fellow at the University of Queensland.