Kangaroo Island koalas may save the koala species 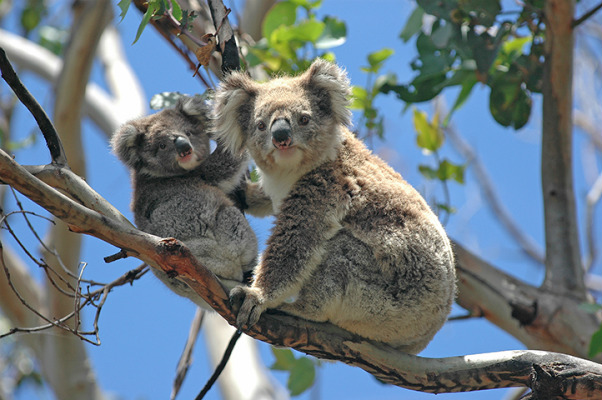 South Australia’s Kangaroo Island koalas have been found to be free from the disease that is threatening koala populations around Australia, particularly in Australia’s north-east where populations are declining dramatically.

Scientists led by the University of Adelaide have discovered that, unlike every other large population in Australia, Kangaroo Island koalas are free from infection by Chlamydia pecorum. This bacterial infection is the most significant disease causing death in koalas, and a key factor in koalas being under threat in north-eastern Australia.

“The impact of Chlamydia on populations of koalas in Queensland and New South Wales is devastating, with high levels of severe disease and death, and common infertility,” says researcher Jessica Fabijan, PhD candidate with the University of Adelaide’s School of Animal and Veterinary Sciences. “This last large, isolated Chlamydia-free population holds significant importance as insurance for the future of the species. We may need our Kangaroo Island koalas to re-populate other declining populations.”

Supported by the Morris Animal Foundation, the study was undertaken by the University’s School of Animal and Veterinary Sciences, in collaboration with the South Australian Department for Environment and Water (DEW), the University of the Sunshine Coast and koala care volunteers. The research has been published in the Nature journal Scientific Reports.

The researchers captured and released 75 wild koalas from the Mount Lofty Ranges and 170 koalas from Kangaroo Island (KI). Each koala was checked by a veterinarian and tested for Chlamydia pecorum and koala retrovirus. On KI, historical veterinary records of koalas were searched for incidence of chlamydial disease. There were over 13,000 records collected over 22 years by DEW.

The researchers found that 46.7% of koalas from the Mount Lofty Ranges were positive for Chlamydia, although the vast majority not showing signs of disease. All Kangaroo Island koalas tested negatively for Chlamydia and no disease was observed. There were no definitive cases of chlamydial disease in the 13,000 past records of koala examinations on KI.

“This is a very important finding because Chlamydial disease is so prevalent and efforts to fight it have so far been unsuccessful,” says project leader Dr Natasha Speight, also from the University of Adelaide’s School of Animal and Veterinary Sciences. “Although, South Australian and Victorian koala populations are stable, this is believed to be at least partly due to current lower prevalence and severity of Chlamydial disease.”

Research is underway to understand the difference in Chlamydial disease severity between southern and northern koalas.

“There are current trials of a Chlamydial vaccination in northern koalas to protect them from infection, but it is an uphill battle,” says Ms Fabijan. “Our Chlamydia free Kangaroo Island koalas could in the future provide a safeguard against this serious threat to this iconic species.”

DEW koala spokesperson Brenton Grear said this new research is welcome news and means the Kangaroo Island strong population is one of the few, and likely the largest, Chlamydia-free population of koalas in Australia.

“Future-proofing South Australia’s koala health is paramount to ensuring the survival of the species in Australia, given the marked decline in the eastern states,” Mr Grear says.

“As well as maintaining Kangaroo Island koalas as Chlamydia-free, the department is managing koala populations through fertility control on Kangaroo Island and in the Mount Lofty Ranges in areas where they occur at unsustainably high densities.

“Compared to the eastern states, South Australia’s koala population has increased in recent years. On Kangaroo Island the estimated population is around 50,000, while in the Mount Lofty Ranges it is estimated to be over 150,000 koalas.

“To reduce koala populations where densities are unsustainably high in South Australia, the department is using non-surgical contraceptive implants which can be placed under the skin at the base of the tree.

“The focus is on reducing breeding to ensure a sustainable South Australian koala population continues to thrive with enough food and habitat.”

Morris Animal Foundation is one of the largest nonprofit animal health research organisations in the world, funding more than $126 million in studies across a broad range of species since 1948.