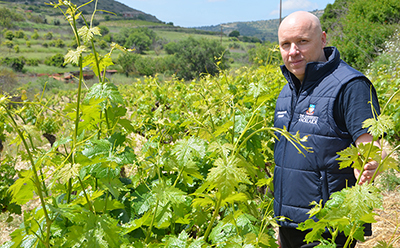 Wine researchers at the University of Adelaide are investigating drought-tolerant grape varieties from Cyprus for their suitability for Australian conditions.

The Cypriot varieties Xynisteri (white) and Maratheftiko (red) have just been released from Australian quarantine and are being propagated at the University’s Waite campus before being placed in trials, replicating those being undertaken in commercial Cypriot vineyards.

“We are seeing increasing temperatures and increasing frequency of heat waves in southern Australia and this is affecting vine harvest and putting more and more pressure on water resources,” says University of Adelaide PhD student Alexander Copper. “These varieties are very drought tolerant in Cyprus, often grown without any irrigation, and it is hoped they will be able to grow in Australian conditions with minimal to no irrigation.”

Mr Copper is funded by University of Adelaide and Wine Australia scholarships, and supervised by Associate Professors Cassandra Collins and Susan Bastian, and Dr Trent Johnson, in the University’s School of Agriculture, Food and Wine.

“Australia’s popular grape varieties, including Shiraz, Cabernet Sauvignon, Pinot Noir, Chardonnay, Sauvignon Blanc, Pinot Gris are all French varieties that traditionally have been grown in parts of France with high rainfall and without irrigation. In Australia these varieties are typically irrigated due to our difference in rainfall, likewise our Rieslings which originally came from Germany,” says Mr Copper.

Preliminary research has shown that Australian consumers like wines made from these varieties.

“The first part of Alexander’s project was to assess consumer response to these wines, which has been positive,” says Associate Professor Collins.

“Considering the similar climates of Australia and Cyprus, these Cypriot grape varieties have potential as environmentally sustainable wines which will require less resources and help in the future adaptation of the wine industry to a changing climate.”

Mr Copper has established trials under irrigated and drought conditions in Cyprus and the material from quarantine will be used to repeat these experiments in Australia to further determine their drought tolerance.

“We hope to have data ready for publication from the Cyprus trials early in 2020, and the Australian trials at the Waite campus in Autumn 2021,” he says. “After that we hope to run field trials in different regions of South Australia.”

This research at the University of Adelaide’s Waite campus, aligns with the University’s industry engagement priority in agrifood and wine, and in tackling the grand challenge of environmental sustainability.