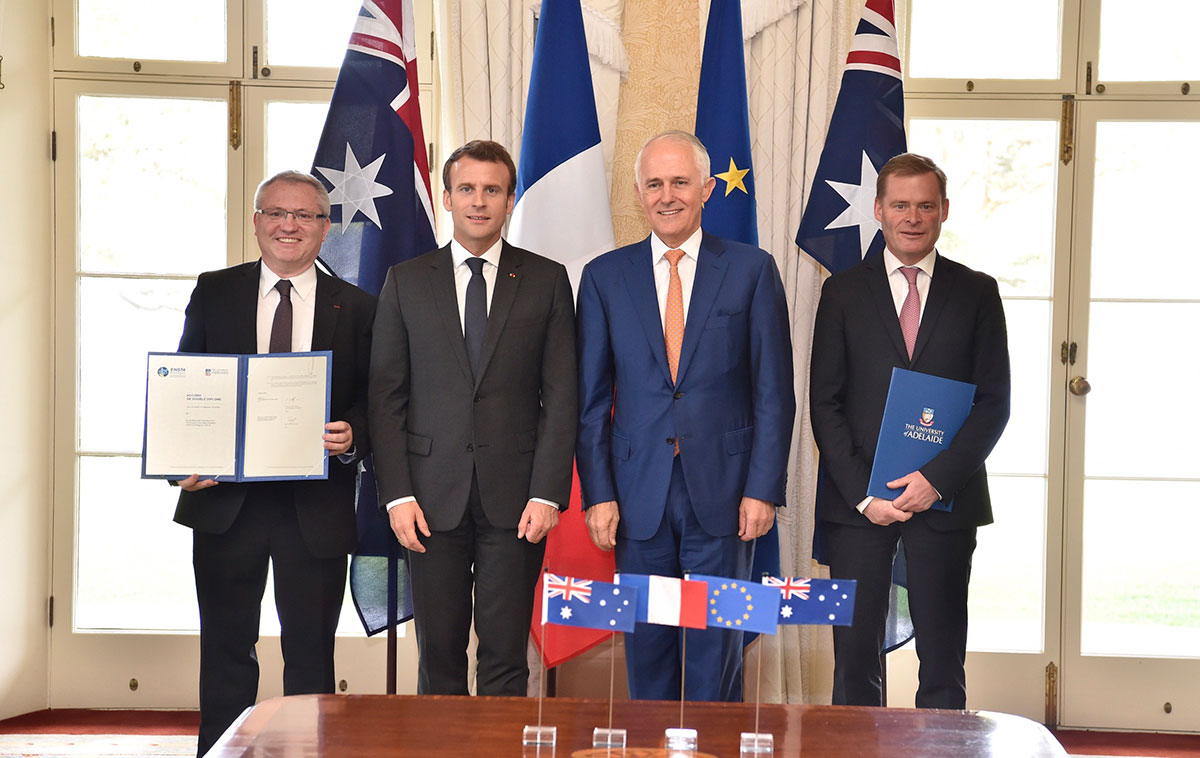 Skilled engineers for the Australian and global defence industries – specifically in submarine and ship building – will graduate from a new dual Master's degree in engineering to be offered in Australia and France.

The announcement, made today by the University of Adelaide and French education institution ENSTA Bretagne, in the presence of the President of the French Republic, Emmanuel Macron, and the Australian Prime Minister, Malcolm Turnbull, is the latest in the University's growing commitment to defence skills, education and research.

The University's Vice-Chancellor and President, Professor Peter Rathjen, and the Director of ENSTA Bretagne, Mr Pascal Pinot, have today exchanged copies of a signed partnership agreement between the two institutions, in a meeting in Sydney with President Macron and Prime Minister Turnbull. The event was part of President Macron's official visit to Australia.

"This new degree program is a perfect example of what can be achieved through international collaboration to co-create the future workforce," Professor Rathjen says.

"Universities are unique institutions because they bring together innovation, human capital and global connectivity, for the benefit of society and the economy. That's exactly what we're seeing in this partnership with France."

The University of Adelaide is Australia's leading university in defence engagement with government and industry.

"Our new, dual Master's program will feed directly into the defence engineering skills base available to South Australia, as the State prepares for $89 billion of defence spending on submarines and surface ships over the coming years," says Professor Pascale Quester, Deputy Vice-Chancellor (Academic).

"The program will target technicians and engineers from Australia or internationally who are seeking to upskill or transition from other industry sectors, such as manufacturing."

The new international Master's program will see students – both experienced engineers and recent undergraduates – spend one semester in Brest, France, one semester in Adelaide, and a third semester in a jointly supervised industry internship.

Professor Quester says the new, joint program with ENSTA Bretagne builds on over a decade of the University's successful Master of Marine Engineering program, delivered in partnership with Australian submarine and warship builder ASC.

"Today’s announcement demonstrates the commitment of the University of Adelaide to co-creating with industry partners the workforce of the future. This joint program will shore up our reputation as a global leader in the delivery of courses on the design, construction and sustainment of surface ships and submarines," she says.

Teaching for the new program will begin at ENSTA Bretagne, France, in August 2018, and will continue at the University of Adelaide in February 2019.

About the University of Adelaide
The University of Adelaide is a world-class research and teaching institution, centred on discovering new knowledge, pursuing innovation and preparing the educated leaders of tomorrow. As Australia’s third oldest university, Adelaide has a well-established reputation for excellence and progressive thinking. This continues today, with the University of Adelaide proudly ranked in the top one percent of universities in the world. We recognise exceptional people as one of our greatest assets. Adelaide has over 100 Rhodes Scholars among its distinguished alumni and is associated with five Nobel Laureates. We attract academic staff who are global leaders in their fields, along with the best and brightest students.
www.adelaide.edu.au