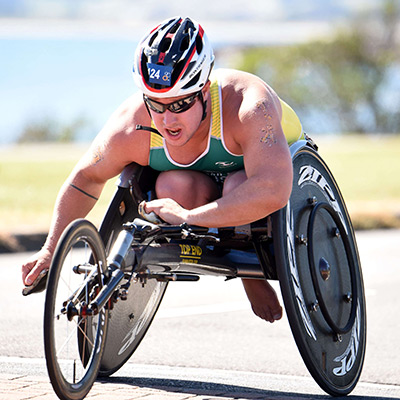 Specialised 3D printing technology at the University of Adelaide has offered a 'helping hand' to South Australian paratriathlete Scott Crowley for his race at the Gold Coast 2018 Commonwealth Games this Saturday.

Until now, Mr Crowley has often relied on custom home-made wheelchair 'racing gloves', which he has made on the kitchen stove by melting plastic and laying it over his hands.

The gloves are used to protect Mr Crowley's hands during the push action while racing (known as 'punching' the wheels), so he can propel the tyres of his wheelchair for maximum speed.

His home-made gloves have lacked consistency in size and weight, which he's had to adjust to during racing. They were also tough to travel with – he once left a pair in the back of his car, and on one hot day they melted back to blobs of plastic.

Mr Crowley – who is also a student support staff member at the University of Adelaide's Faculty of the Professions – has now been provided with a new set of wheelchair racing gloves thanks to the 3D printing facilities at the University's ThincLab Adelaide. 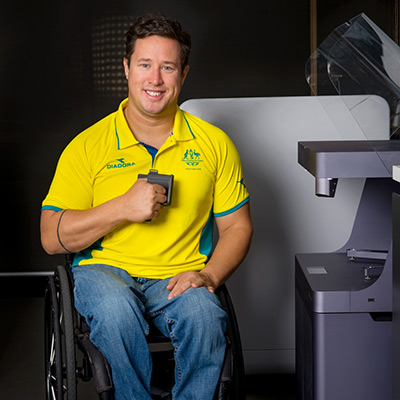 ThincLab 3D Studio Manager Morgan Hunter worked with Mr Crowley on the project, initially modelling the shape in clay. The process involved a 3D scan of Mr Crowley's original gloves and the clay models. There were several iterations and fittings along the way to the final product, which has been personalised for his hand size and shape.

The finished glove is a carbon fibre printed hand piece, covered in rubber.

"This is the first 3D printed glove I've ever had. It's custom to my hand – it's very light but still very strong, and it's consistent. It's good to have that consistency of shape," Mr Crowley says.

"So far the new gloves have performed excellently, much better than my normal gloves. Because they're light, they also help with recovery time. I'm definitely happy with the outcome," he says.

All of the design and production work was completed by Mr Hunter at ThincLab Adelaide.

"This project is a great example of how ThincLab is able to provide the design advice and expertise, as well as the prototyping capability to solve a problem," Mr Hunter says.

"We wish Scott all the very best for his race this weekend – we'll be thinking of him."

Photos: Scott Crowley in training in 2016 (photo by Delly Carr) and with his new 3D-printed racing glove, at the University’s ThincLab Adelaide (photo by Jennie Groom).